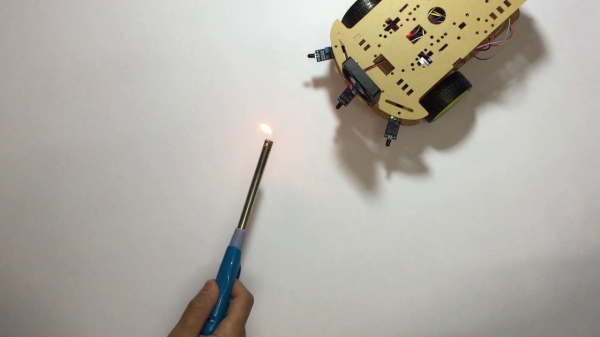 Fighting fire with robots may take jobs away from humans, but it can also save lives. [Mell Bell Electronics] has built a (supervised) kid-friendly version of a firefighting robot that extinguishes flames by chasing them down and blowing them out.

This hyper-vigilant robot is always on the lookout for fire, and doesn’t waste movement on anything else. As soon as it detects the presence of a flame, it centers itself on the source and speeds over to snuff it out with a fan made from a propeller and a DC motor.

Here comes the science: fire emits infrared light, and hobbyist flame sensors use IR to, well, detect fire. This fire bot has three of these flame sensors across the front that output digital data to what has got to be the world’s smallest Arduino – the ATmega32U4-based PICO board that [Mell Bell] just so happens to sell. Cover your mouth and nose and crawl along the floor toward the break to see how responsive this thing is.

Firefighters aren’t the only brave humans involved in the process of keeping the forests standing, or who feel the rising pressure of automation. Hackaday’s own [Tom Nardi] wrote a piece on a dying breed called fire lookouts that will no doubt ignite your interest.

END_OF_DOCUMENT_TOKEN_TO_BE_REPLACED 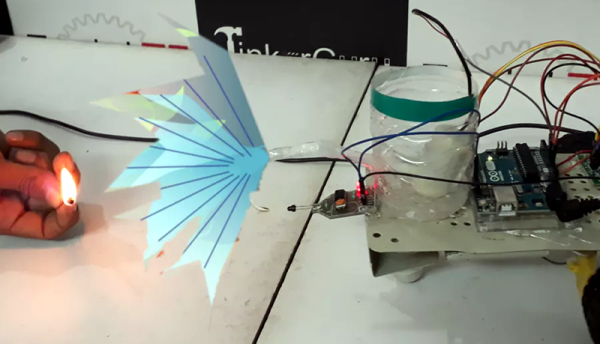 We don’t think we’d want to trust our fire safety to a robot carrying a few ounces of water, but as a demonstration or science project, [Tinker Guru’s] firefighting robot was an entertaining answer to the question: “What do I do with that flame sensor that came in the big box of Arduino sensors I bought from China?” You can see a video of the device below.

You can see, it is a pretty standard two-wheel robot with the drive wheels to the rear and a skid plate up front. There are a flame sensor and a water pump up forward, as well. You can probably guess, the device notices a flame and rushes to squirt water on it.