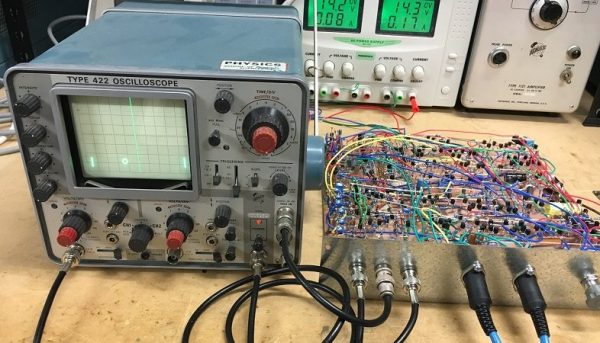 Pong may not be much anymore, but it’s the granddaddy of all video games, and there’s still a lot to learn by studying its guts. And what better way to do that than by having it all laid out before you as you play? All it takes is 200 discrete transistors and two large handfuls of passives tacked to a piece of copper clad board to get a version of Pong executed without a single chip that’s playable on an oscilloscope.

Clearly a labor of love, if not an act of temporary insanity, [GK]’s realization of Pong is a sight to behold. Every scrap of it is circuits of his own design, executed dead bug style, apparently because [GK] enjoys life on hard mode. The game itself is surprisingly playable and you can even play against the machine. The video below is a little hard to watch, what with some glare on the oscilloscope CRT, but we’ll cut [GK] plenty of slack on this one; after all, it looks like this whole project was pulled off in one marathon weekend build session.

We’re still busy poring over the hand-drawn Forrest Mims-style schematics, which by themselves are almost a complete course in analog design. A lot of the circuits remind us [GK]’s bouncing ball simulation, which we covered a while back.