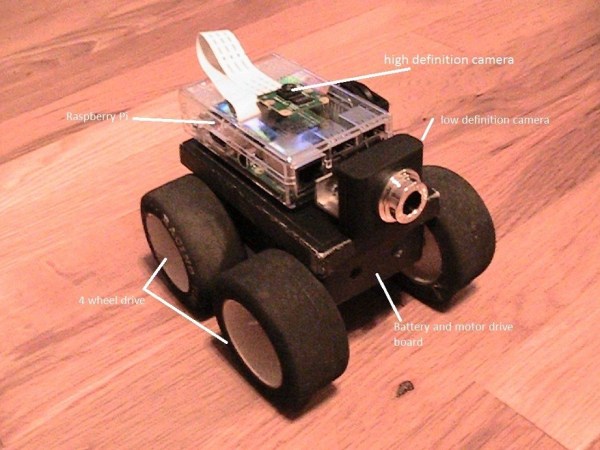 Why bother crawling into that tiny sewer tunnel and getting coated in Cthulhu knows what — not to mention possibly getting stuck — when you can roll a robot in there instead? That’s what InspectorBot does. It’s [Dennis]’ entry for The Hackaday Prize and a finalist for our Best Product competition.

InspectorBot is a low-profile rover designed to check out the dark recesses of sewers, crawlspaces, and other icky places where humans either won’t fit or don’t want to go. Armed with a Raspberry Pi computer, it sports a high-definition camera pointed up and a regular webcam pointing forward for navigation. It uses point-to-point WiFi for communication and rocks all-wheel drive controlled by a pair of L293D motor drivers.

This seems like fertile ground for us. Pipe-crawlers, chimney-climbers, crawlspace-slitherers all sound like they’d be helpful, particularly in conjunction with some kind of computer vision that allowed the robot to notice problems even when the operator does not. Right now, [Dennis] has the chassis rolling and most of the current work is focused on software. Both cameras are now working, allowing the InspectorBot to send forward-looking and upward-looking video back to the operator at the same time. This, alone, is a great advancement of the current crop of Raspberry Pi rovers and adds a lot of functionality to an easy-to-build platform. 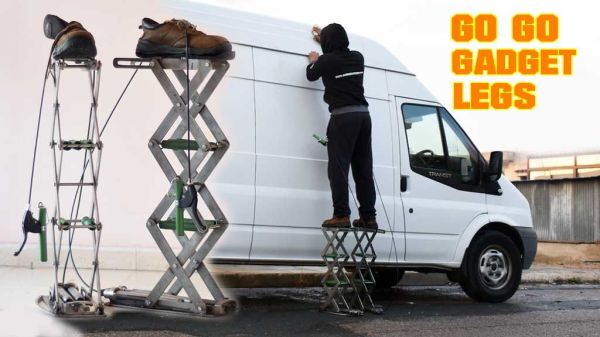 It’s been said that necessity is the mother of all invention. This was probably the fundamental principle behind the show “Inspector Gadget”, a story about a police agent who has literally any technology at his grasp whenever he needs it. Although the Inspector’s gadgets get him into trouble more often than not (his niece Penny usually solves the actual crimes), the Inspector-inspired shoes that [Make it Extreme] built are a little bit more useful than whatever the Inspector happens to have up his sleeve (or pant leg, as the case may be).

If a fabrication tour de force, [Make it Extreme] built their own “Go Go Gadget Legs”, a set of pneumatically controlled stilts that allow the wearer to increase their height significantly at the push of a button. We often see drywall contractors wearing stilts of a similar height, but haven’t seen any that are able to raise and lower the wearer at will. The team built the legs from scratch, machining almost every component (including the air pistons) from stock metal. After some controls were added and some testing was done, the team found that raising one foot at a time was the safer route, although both can be raised for a more impressive-looking demonstration that is likely to throw the wearer off balance.

The quality of this build and the polish of the final product are incredibly high. If you have your own machine shop at home this sort of project might be within your reach (pun intended). If all you have on hand is a welder, though, you might be able to put together one of [Make it Extreme]’s other famous builds: a beer gun.