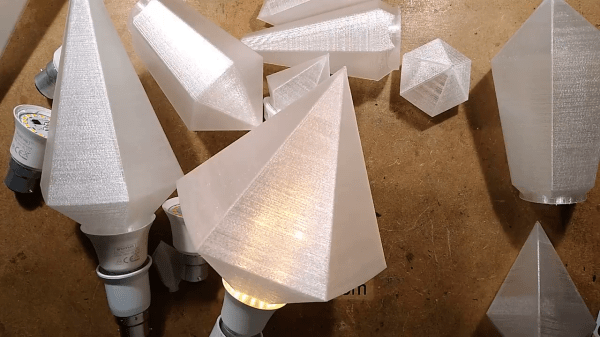 After accidentally crushing the plastic envelope on a cheap LED light bulb, [bigclivedotcom] figured out he could make custom ones using OpenSCAD in any shape he wants. He previously hacked a bunch of these inexpensive LED bulbs last month, discovering they all shared a similar circuit topology. All the ones he experimented with drove the LEDs hard, something that’s bound to reduce bulb lifetime. By reverse engineering the current control regulator, it turns out it is easy to adjust the drive current by changing a resistor or two. Reducing the current should not only increase lifetime, but could allow repurposing the bulb for other uses, such as decorative lighting.

Three OpenSCAD scripts are provided which generate what he calls diamond, obelisk, and globe styles. Basic parameters for each style can be tweaked by the user, such as feature sizes and number of facets. He mentions the lack of OpenSCAD customizers in his script — this can easily be added as shown in the following example (this section of the User Manual on customizers explains the syntax). Note that you can’t make the slider generate real numbers, only whole numbers, which is why the scaling factor is multiplied by 10.

These fancy globes can be used as night lights and possibly outdoor lighting, if you can make a good seal with the base. Custom chandeliers, anyone? Indicator lamps for very large panels? Any other ideas? If you want to explore the LED lifetime issue further, inveterate tinkerer Ted Yapo wrote a deep dive into the mythical 100,000 hour LED bulb. Thanks to [Cliff Claven] for the tip.

END_OF_DOCUMENT_TOKEN_TO_BE_REPLACED 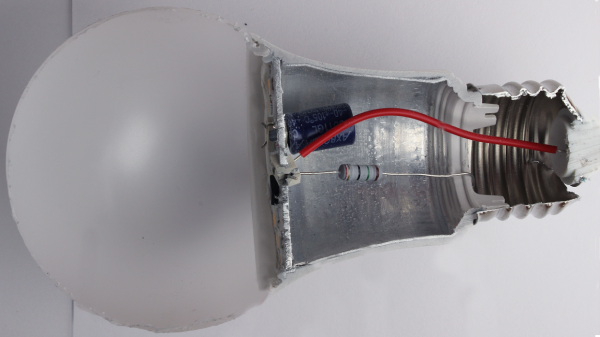 [electronupdate] has done a lot of LED light bulb teardowns over the years, witnessing a drive towards ever-cheaper and ever-simpler implementations, and suspects that LED light bulb design has finally reached its ultimate goal. This teardown of a recent dollar store example shows that cost-cutting has managed to shave even more off what was already looking like a market saturated with bottom-dollar design.

The electrical components inside this glowing model of cost-cutting consists of one PCB (previously-seen dollar store LED bulb examples had two), eleven LEDs, one bridge rectifier, two resistors, and a controller IC. A wirewound resistor apparently also serves as a fuse, just in case.

That’s not all. [electronupdate] goes beyond a simple teardown and has decapped the controller IC to see what lurks inside, and the result is shown here. This controller is responsible for driving the LEDs from the ~100 Volts DC that the bridge rectifier and large electrolytic cap present to it, and it’s both cheap and clever in its own way.

The top half is a big transistor for chopping the voltage and the bottom half is the simple control logic; operation is fast enough that no flicker is perceived in the LEDs, and no output smoothing cap is needed. The result, of course, is fewer components and lower cost.

Some of you may recall that back in the early days of LED lighting, bulbs that could last 100,000 hours were a hot promise. That didn’t happen for a variety of reasons and the march towards being an everyday consumable where cost was paramount continued. [electronupdate] feels they have probably reached that ultimate goal, at least until something else changes. They work, they’re cheap, and just about everything else has been successfully pried up and tossed out the door.