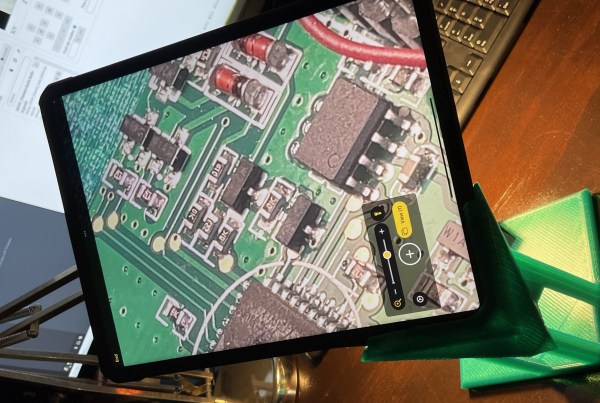 Be it the ever shrinking size of components, the miniscule size of the printing on such pieces, or the steady march of time that makes visits to the optometrist an annual ritual, many of us could use some assistance when things start getting fuzzy at the workbench. Arm-mounted LED magnifying lenses can be a handy helper. Zooming in on a macro photo on a smartphone is also a common option that we’ve used many times.

[Timo Birnschein] started down a similar path when he realized that his iPad Pro comes with an app called simply “Magnifier”. A 12” iPad isn’t exactly the most convenient device to hold while trying to solder small parts, so he spent some time designing and 3D printing a specialty iPad stand that he calls a “Quick and Dirty High Performance EE Microscope.” We call it a magnificent tool hack!

Rotating the iPad diagonally so that the camera is closest to the subject leaves plenty of room to work and makes great use of the available screen space. [Timo] reports that at 50% magnification the 12” screen makes even 0603 SMD parts easy to read. Now he rejoices to have more to do with his iPad than watching YouTube and reading Hackaday- although we don’t know why you couldn’t do both.

The STL files have been released on Thingverse for your experimentation. [Timo] notes that he’d like to add an LED ring to brighten things up, and a fume extractor to protect the delicate lens on the iPad. We have to wonder if some plastic wrap over the lens might produce the same effect at almost no cost. Whatever [Timo] decides to do, we’re sure it’ll be brilliant.

If you don’t have an iPad and a 3D printer, you might enjoy an earlier post that shows how you can use your phone as a microscope. If Lego and Raspberry Pi are your go-to parts, you can set your sights on this Lego/Pi/Arduino microscope.

Do you have your own preferred solution for seeing yourself through a hazy situation? Be sure to write it up, and then drop it in the Tip Line! 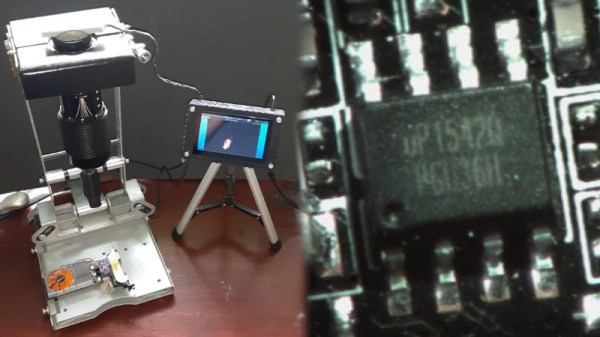 Soldering tiny stuff is hard, if not impossible, without some optical assistance. [Ad_w00000] was having just this problem, so built himself a soldering magnifier to help.

The magnifier uses a variety of components [Ad_w00000] had lying around. For the optical side of things, an old Canon DSLR zoom lens was pressed into service as the main magnifying element. The lens was then fitted with an old laptop webcam, which was glued into an old lens extender to avoid modifying the main lens itself. The webcam is hooked up to an Asus Tinkerboard fitted with a touchscreen display to show the images. The whole lens assembly is then fitted onto an old TV stand to enable it to sit far enough above the work surface to focus properly.

The build is a great example of building something useful out of whatever you have on hand. Sometimes, that’s cheaper and quicker than spending money and waiting for something to ship. It also has the bonus that you’ll learn useful skills along the way.

We’ve seen other great soldering hacks recently, too, like this gimbal to help steady hand tremors. If you’ve got your own coming together, be sure to let us know!

If you are working with surface mount electronics and don’t have the handy heritage of a pulp-comic superhero to give you super-high-resolution eyesight, then you will quickly find yourself needing a magnifying glass. And since you’ll be using both hands doing the soldering, you’ll need some way to hold it.

There are multiple solutions to this problem on the market, from headband magnifiers and inspection magnifiers on arms to cheap “Helping hands”. They all have their strengths and weaknesses, but none of them appealed to our reader [Anil], who wanted an illuminated magnifier to fit the Hobby Creek arm on his Pana-Vise.

His solution was to 3D print a surround for a lens from a set of helping hands. This is no simple print though, it’s made of three layers. There is a translucent diffuser, a layer that holds a set of LEDs and attaches to the arm, and a cover to hold the lens in place. Power for the LEDs comes via USB.

The print itself was a bit tricky, his diffuser used T-glase translucent filament, and was fused to the PLA LED ring in a single print from his dual-extruder printer. He takes us through the various steps he needed to get it right, and shows us a few of his failed prototypes. The resulting magnifier looks to be a useful addition to his bench, he’s made the STL files available towards the bottom of his post so you can have a go at making one for yourself.

This is the kind of simple hack that can make life so much easier for the SMD constructor. We’ve had  another set of augmented helping hands featured here in the past, and of course there’s the ultimate portable SMT station. If SMD soldering is new to you, please also read our SMD guide for the nervous.