Soldering requires steady hands, so when [Jonathan Gleich] sadly developed a condition called an essential tremor affecting his hands, soldering became much more difficult. But one day, while [Jonathan] was chatting with a friend, they were visited by the Good Ideas Fairy and in true hacker fashion, he ended up repurposing a handheld camera stabilizing gimbal to hold a soldering iron instead of a camera or smartphone. Now instead of the gimbal cancelling out hand movements to keep a camera steady, it instead helps keep a soldering iron steady. 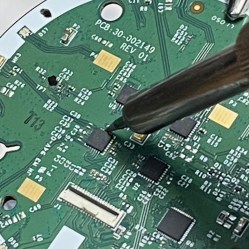 While the inner workings of the cheap gimbal unit didn’t need modification, there were a couple of things that needed work before the project came together. The first was to set up a way to quickly and easily connect and disconnect the soldering iron from the gimbal. Thanks to a dovetail-like connector, the iron can be safely stored in its regular holster and only attached when needed.

The other modification is more subtle. The stabilizer motors expect to be managing something like a smartphone, but a soldering iron is both lighter and differently balanced. That meant that the system worked, but not as well as it needed to. After using some small lead weights to tweak the mass and center of gravity of the soldering iron — making it feel and move a bit more like an iPhone, as far as the gimbal was concerned — results were improved.

The soldering iron stabilizer works well enough for now, but we don’t doubt that [Jonathan] already has further tweaks in mind. This is a wonderful repurposing of a consumer device into an assistive aid, so watch it in action in the short video embedded below.

Is reimagining supportive or assistive technology something that gets the gears in your head turning? Good news, because that is one of the challenges in the 2021 Hackaday Prize, so get thinking!