When you can get a WiFi-enabled microcontroller for $3, it’s little surprise that many of the projects we see these days have ditched Ethernet. But the days of wired networking are far from over, and there’s still plenty of hardware out there that can benefit from being plugged in. But putting an Ethernet network into your project requires a switch, and that means yet another piece of hardware that needs to get crammed into the build. 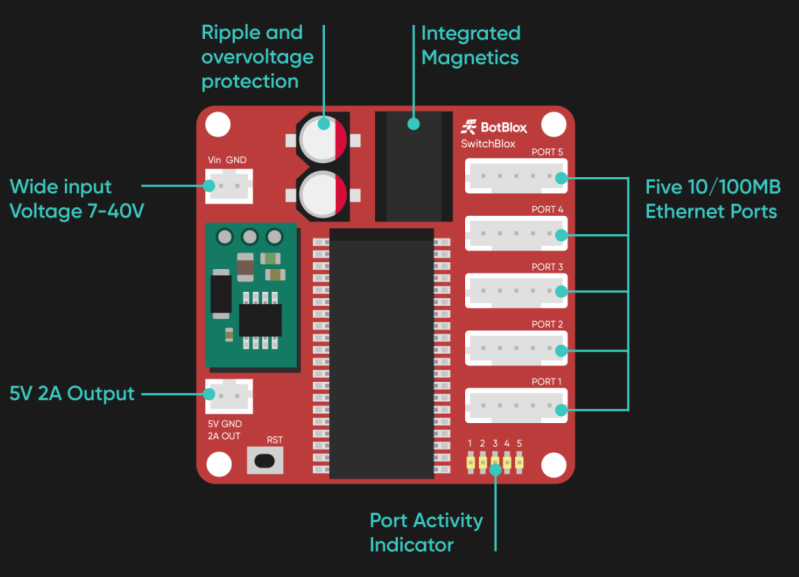 Seeing the need for a small and lightweight Ethernet switch, BotBlox has developed the SwitchBlox. This 45 mm square board has everything you need to build a five device wired network, and nothing you don’t. Gone are the bulky RJ45 jacks and rows of blinkenlights, they won’t do you any good on the inside of a robot’s chassis. But that’s not to say it’s a bare bones experience, either. The diminutive switch features automatic crossover, support for input voltages from 7 V all the way up to 40 V, and management functions accessible over SPI.

If you want to get up and running as quickly as possible, a fully assembled SwitchBlox is available to purchase directly from BotBlox for £149.00. But if you’re not in any particular rush and interested in saving on cost, you can spin up your own version of the Creative Commons licensed board. The C++ management firmware and Python management GUI isn’t ready for prime time just yet, but you’ll be able to build a “dumb” version of the switch with the provided KiCad design files.

The published schematic in their repo uses a Microchip KSZ8895MQXCA as the Ethernet controller, with a Pulse HX1344NL supplying the magnetics for all the ports in a single surface mount package. Interestingly, the two images that BotBlox shows on their product page include different part numbers like H1102FNL and PT61017PEL for the magnetics, and the Pulse H1164NL for the Ethernet controller.

There’s no question that WiFi has dramatically changed the way we connect devices. In fact, there’s an excellent chance you’re currently reading these words from a device that doesn’t even have the capability to connect to a wired network. If you’re looking to connect a device to the Internet quickly, it’s tough to beat.

But WiFi certainly isn’t perfect. For one, you have to contend with issues that are inherent to wireless communications such as high latency and susceptibility to interference. There’s also the logistical issues involved in making that initial connection since you need to specify an Access Point and (hopefully) an encryption key. In comparison, Ethernet will give you consistent performance in more or less any environment, and configuration is usually as simple as plugging in the cable and letting DHCP sort the rest out. 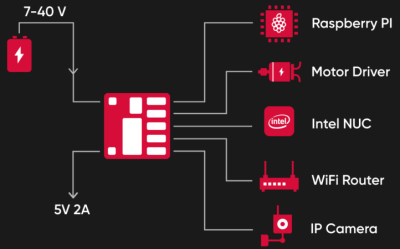 Unfortunately, that whole “plugging in” part can get tricky. Given their size, putting an Ethernet switch into your project to act as an internal bus only works if you’ve got space to burn and weight is of little concern. So as appealing as it might be to build a network into your robot to connect the Raspberry Pi, motor controllers, cameras, etc, it’s rarely been practical.

This little switch could change that, and the fact it’s released under an open source license means hackers and makers will be free to integrate it into their designs. With the addition of an open source management firmware, this device has some truly fascinating potential. When combined with a single board computer or suitably powerful microcontroller, you have the makings of a fully open source home router; something that the privacy and security minded among us have been dreaming of for years.

Network switches come in two different flavors: managed, where you have some interface to configure and monitor the equipment, and unmanaged where the device just does what it is supposed to do and you can’t really control it. [Tiziano Bacocco] wanted to manage his cheap unmanaged switch, so he did what any good hacker would do: he opened it up.

Inside the Digicom 10/100 switch he found an IP178CH controller IC and a quick search turned up a data sheet. [Tiziano] noticed there were three ways to configure the switch: Some hardware pins could control very basic functions; an EEPROM (absent on the PCB) could configure the device; or the chip would accept commands via a synchronous serial port.

Since the datasheet covered the protocol required, [Tiziano] commandeered an Arduino Pro Mini and used it to send commands to configure the switch. A few resistors and some quick code allowed him to control VLAN and other functions on the switch via the USB port. Of course, he mentioned you could use a Raspberry Pi if you wanted a network interface–or maybe that’s a good excuse to use one of those Ethernet shields you got on clearance at Radio Shack.

END_OF_DOCUMENT_TOKEN_TO_BE_REPLACED

[Kenneth Finnegan’s] post about this 24-Port HP ProCurve 2824 Ethernet Switch teardown was a delight to read. He’s taking an introduction to networking class at California Polytechnic State University. One of their labs included virtual machines shooting thousands of new MAC addresses at the thing all at once. Despite it’s ability to switch data at a blazing fast rate, it’s ability to deal with that many new hardware identifiers was less than impressive. He wanted to find out why and it just so happened he had one of these in his parts bin at home (which he refers to as if it’s a high-powered RPG character).

The mainboard is divided into three major blocks: the power supply, the switching hardware, and the processor that makes this a manged switch. Although he covers all of these pieces (and the switching stuff is very interesting to learn about) it is the processor section that was causing the aforementioned slowdown. It’s a 266MHz PowerPC chip with a measly 64 MB of RAM. Of course this doesn’t need to be any more powerful since all traffic from previously ‘learned’ MAC addresses gets handled by the switching block and never touches the processor portion.

Don’t miss the end of his post where he discusses how the filtering caps, and semi-isolated ground planes help to tame the beast created from all of this high-speed switching.