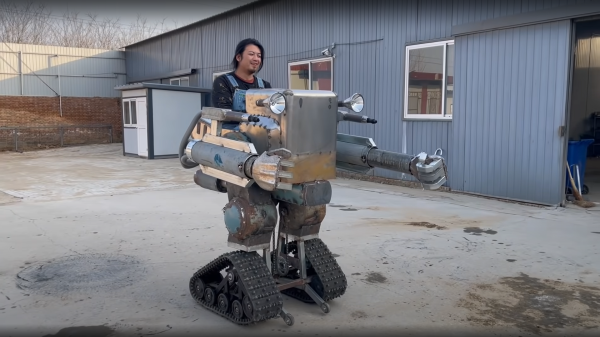 [Handy Geng] is back again with another bonkers build, that we just can’t not cover. His Uncle came to visit the workshop one day and said he’d love to go there every day, and could even watch over it when [Handy Geng] was away. But being an older chap and needing a stick to get around, he would not be much use if ‘bad guys’ decided to pay a visit. The obvious solution was to build a ride-on security mech which Uncle could ride on, (video, embedded below) and use to defend the shop from bandits.

The build starts with him unloading a large pair of tracked wheel units from his truck, which caused a chuckle around these parts when we tried to imagine the scrap yard he’d just visited! The build video is more of a spot-weld-come-assembly log, with the less interesting sub assembly construction omitted. If he’d included all the details, this video would have been hours long. Though, we’d probably watch that anyway.

Features of the final construction include, but not limited to, dual motors for on-the-spot turns, night-time patrol lights, dual pneumatic fists for attack mode, dual water cannons for a more gentle approach and rear facing speakers blasting out Chinese opera for the ultimate deterrent. Practical touches include an integrated glasses case for the ready-readers, and a walking cane holder, so the mech was Uncle-ready. He seemed impressed from the grin on his face!