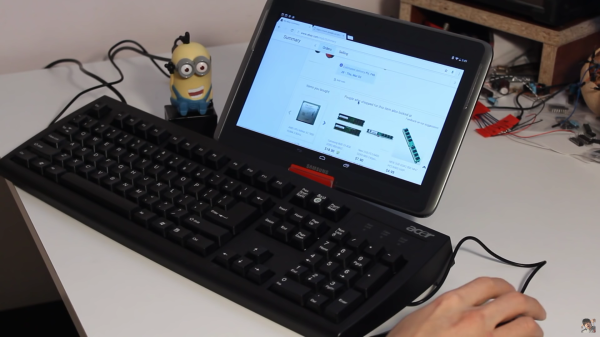 Evil geniuses usually have the help of some anonymous henchmen or other accomplices, but for the rest of us these resources are usually out of reach. [Evan], on the other hand, is on his way to a helpful army of minions that will do his bidding: he recently built a USB-powered minion that turns a regular PS/2 mouse and keyboard into a Bluetooth mouse and keyboard.

[Evan] found his minion at a McDonald’s and took out essentially everything inside of it, using the minion as a case for all of the interesting bits. First he scavenged a PS/2 port from an old motherboard. An Arduino Nano is wired to an HC-05 Bluetooth chip to translate the signals from the PS/2 peripherals into Bluetooth. The HC-05 chip is a cheaper alternative to most other Bluetooth chips at around $3 vs. $40 for more traditional ones. The programming here is worth mentioning: [Evan] wrote a non-interrupt based and non-blocking PS/2 library for the Arduino that he open sourced which is the real jewel of this project.

Once all the wiring and programming is done [Evan] can turn essentially any old keyboard and mouse into something that’ll work on any modern device. He also put an NFC tag into the minion’s head so that all he has to do to connect the keyboard and mouse is to swipe his tablet or phone past the minion.

If you’re looking for an interesting case for your next project, this McDonald’s Minion toy seems to be pretty popular. PS/2 keyboards are apparently still everywhere, too, despite their obsolescence due to USB. But there are lots of other ways to get more use out of those, too.

END_OF_DOCUMENT_TOKEN_TO_BE_REPLACED

Buy a computing device nowadays, and you’re probably getting something that knows x86 or an ARM. There’s more than one architecture out there for general purpose computing with dual-core MIPS boards available and some very strange silicon that’s making its way into dev boards. lowRISC is the latest endeavour from a few notable silicon designers, able to run Linux ‘well’ and adding a few novel security features that haven’t yet been put together this way before.

There are two interesting features that make the lowRISC notable. The first is tagged memory. This has been used before in older, weirder computers as a sort of metadata for memory. Basically, a few bits of each memory address tag each memory address as executable/non-executable, serve as memory watchpoints, garbage collection, and a lock on every word. New instructions are added to the ISA, allowing these tags to be manipulated, watched, and monitored to prevent the most common single security problem: buffer overflows. It’s an extremely interesting application of tagged memory, and something that isn’t really found in a modern architecture.

The second neat feature of the lowRISC are the minions. These are programmable devices tied to the processor’s I/O that work a lot like a Zynq SOC or the PRU inside the BeagleBone. Basically, they’re used for programmable I/O, implementing SPI/I2C/I2S/SDIO in software, offloading work from the main core, and devices that require very precise timing.

The current goal of the lowRISC team is to develop the hardware on an FPGA, releasing some beta silicon in a year’s time. The first complete chip will be an embedded SOC, hopefully release sometime around late 2016 or early 2017. The ultimate goal is an SOC with a GPU that would be used in mobile phones, set-top boxes, and Raspi and BeagleBone-like dev boards. There are enough people on the team, including [Robert Mullins] and [Alex Bradbury] of the University of Cambridge and the Raspberry Pi, researchers at UC Berkeley, and [Bunnie Huang].

It’s a project still in its infancy, but the features these people are going after are very interesting, and something that just isn’t being done with other platforms.

[Alex Bardbury] gave a talk on lowRISC at ORConf last October. You can check out the presentation here.