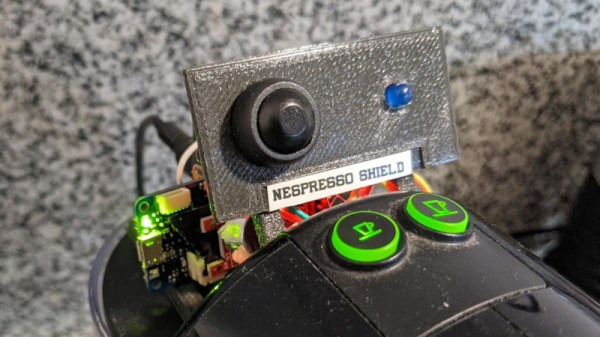 Monitoring an appliance with a microcontroller usually follows a well-worn path of diving inside and finding somewhere in the electrical circuitry that can be connected through some kind of interface to a microcontroller. For his Nespresso pod coffee machine, [Steadman] eschewed tearing into the device, and instead chose to monitor the sound it makes. A commodity sound threshold sensor board is hooked up to an Arduino MKR Zero, and this set-up logs coffee consumption. It’s important to note how this generation of Arduino is no longer one of the simple boards of old, instead it sports an RTC and SD card alongside its SAMD21 Cortex-M0+ processor so it is perfect for just such a datalogging project. The coffee data can be saved into a CSV file viewable by a spreadsheet, for which code is provided.

We like this project for its non-invasive simplicity, and we can see that there could be plenty of other similar machines that could benefit from an analagous technique for non-invasive monitoring. While the pages of Hackaday are full of coffee machine projects we see surprisingly few pod coffeemakers, perhaps because our readers are a canny bunch who balk at paying a premium for their caffeine. If you do happen to have a Nespresso machine though, perhaps you’d like some help identifying the capsules.

Be careful what you say when you are shown a commercial product that you think you could make yourself, you might find yourself having to make good on your promise.

When he was shown a crowdfunded alarm clock coffee maker, [Fabien-Chouteau] said “just give me an espresso machine and I can do the same”. A Nespresso capsule coffee machine duly appeared on his bench, so it was time to make good on the promise.

The operation of a Nespresso machine is simple enough, there is a big lever on the front that opens the capsule slot and allows a spent capsule to drop into a hopper. Drop in a new capsule, pull the lever down to load it into the mechanism, then press one of the buttons to tell it to prime itself. After a minute you can them press either of the large cup or the small cup buttons, and your coffee will be delivered.

To automate this with an alarm clock there is no necessity to operate the lever, it’s safe to leave loading a capsule to the user. Therefore all the clock has to do is trigger the process by operating the buttons. A quick investigation with a multimeter on the button PCB found that the voltage present was 15 V, well above the logic level of the STM32F469 board slated for the clock. Thus a simple circuit was devised using a MOSFET to  do the switching.

Finally, the clock software was created for the STM32F469. The chip’s 2D graphics acceleration hardware and the development board’s high quality display make for a very slick interface indeed.

You can see the resulting clock in the video below the break. It’s an alarm clock coffeemaker we’d be proud to have beside our beds, but there’s one slight worry. On a mains-powered device like the Nespresso the low voltage rails are not always mains-isolated, and it’s not clear whether or not this is the case. Maybe we’d have incorporated an opto-isolator, just in case.

END_OF_DOCUMENT_TOKEN_TO_BE_REPLACED 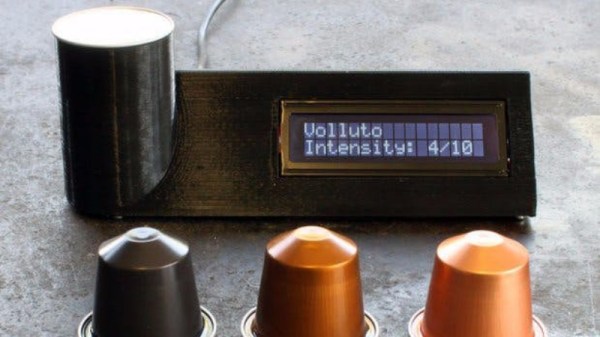 Nespresso fans rejoice! If you like coffee (of course you do) and are a Nespresso fan, chances are you are one of two types of persons: the ones that chosen one type of capsule and stick to it or the ones that have a jar full of mixed capsules and lost track which coffee is which. Of course, there is a third, rarer, OCDish, kind. The ones that have every capsule organized neatly by color in a proper holder, full of style. In any case, if you forgot which color is which coffee because you threw the case away and forgot about it here’s an interesting weekend project for you: the Nespresso Capsule Detector.

[circuit.io team] made a neat Arduino-based project that can detect which capsule is which using an RGB color detector and display information about it on an LCD display. It’s a pretty simple project to make. If you have a 3D printer you can print the case, if not it’s fairly easy to come up with a working casing for the electronics and capsule.

The operation is simple, just drop the capsule in the hole and the Nespresso Capsule Detector will tell you which type it is, its intensity, its flavor tones and the optimal cup size for the coffee in question. We are just not sure if it can detect the Nespresso weddingbots correctly, but who knows?

END_OF_DOCUMENT_TOKEN_TO_BE_REPLACED

Nespresso is a variant of disposable single serve coffee pods with an extensive, expensive, and proprietary accessory line. After selling inconvenient bits of his soul for convenience and, admittedly, fairly tasty shots of coffee, [Chriss Lott] was predictably betrayed by his Nespresso Jura coffee machine.

Rather than simply exchange more local currency for a replacement revenue guarantee for the Nestle conglomerate, he did what any self-respecting hacker would do and tried to fix it himself. Unfortunately he quickly found their cunningly oval shaped security screws to be more trouble than his time was worth. He listed his remaining coffee pods for free on craigslist and decided to toss the machine in the planned obsolescence receptacle which comes standard in any civilized home.

This is where our story would end were it not for the kindness of a fellow hacker. [Dave H] was browsing through craigslist when he spotted the sad tale. However, possessing a different skillset from [Chris], [Dave] had solved the particular oval shaped conundrum with a security screwdriver hand made from an old bolt. He answered his fellow hacker’s vaguely ardent plea and mailed the converted bolt over to [Chris]’s house.

With the proper tool in hand, [Chris] quickly discovered that all that was standing between him and his convenient coffee was a bit of schmoo between the cost cutting membrane switch and its mating pad on the circuit board. With the practically free repair complete, the machine happily vibrated back to life and produced coffee as if its planned obsolescence wasn’t for another few years. We assume a Nestle engineer was thrown into the pit on principle for this loss (they, of course, are evil enough to have a pit).

We’re not sure how the story proliferated through the internet, but we do know that it was inspirational to many convenient caffeine deprived hackers with similar problems. [Chris] found himself the hub in a network of circumnavigating security screw circumventing hackers.

[Dave]’s hacked bolt was the first to go on an adventure resulting in the repair of many machines before the postmen lost it under a cart, standard procedure. A replacement was purchased from an eBay seller for a hefty $40 american dollars and took up the journey where it left off. Others sent in guides on making the tool for those unwilling to wait for one to be shipped. In fact, even the maker of the $40 dollar tool weighed in on the issue. Apparently he was unaware that the consumer and commercial Nespresso machines used the same tools. A hacker himself, he ran a listing of the custom tool at a quarter of the price for the home repairman and another for the commercial appliance at the higher price.

The whole page is an entertaining read, for a certain kind of person, about appliance repair, reverse engineering, and camaraderie. Happily, the hub is still alive. If you find yourself with an oval screw which needs turning, get in touch with [Chris] and a strange community’s kindness will have a nomadic security bit crossing nations your way soon. 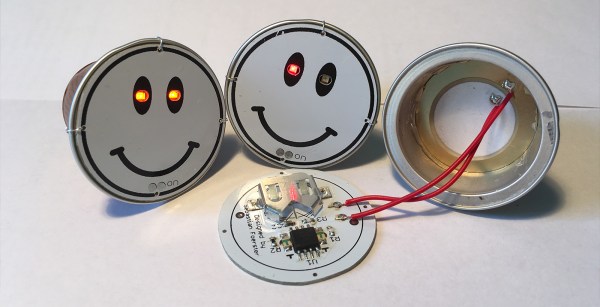 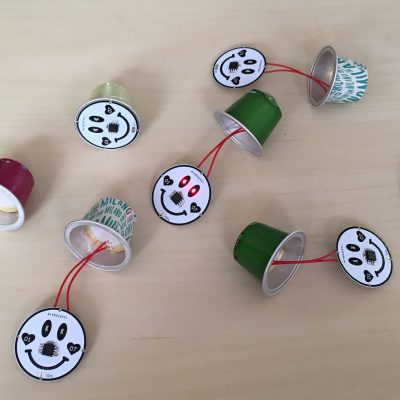