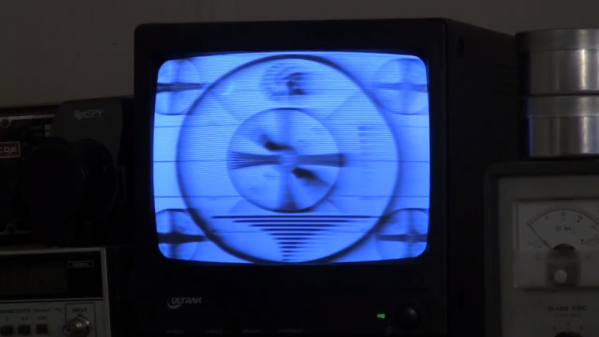 Night creatures and insomniacs of a bygone era may fondly recall a TV test pattern appearing once [Jack Parr] or [Steve Allen] had had their say and the local TV station’s regular broadcast day had concluded. It was affectionately known as the Indian Head test pattern, for the stylized Native American, resplendent in a feathered headdress, that featured prominently in the graphic.

Unknown to most viewers was exactly how that test pattern and others like it were generated. But thanks to [Rich “The Lab Guy” Diehl] and his monoscope restoration project, we can all share in the retro details. It turns out that while some test patterns were merely a studio camera trained on a printed card, most were generated by a special tube called a monoscope. It functioned in basically the same manner as a studio camera, but rather than scanning the incident light of a scene with an electron beam, the image was permanently etched into a thin aluminum plate. [Rich] laid hands on two vintage monoscope tubes, one containing the Indian Head test pattern, and set about building a device to use them. “The Chief” can hold either tube in a Faraday cage of thin, flexible PCB material and 3D-printed parts, with supporting electronics like the power supply and video amplifiers in an aluminum chassis below.

It’s a nice piece of work and a great lesson in how it used to be done, and the lithophane of the Indian head is a nice touch. Hats off to [The Lab Guy] for build quality and great documentation, including a detailed video series that starts with the video below. If you need a little more background on how video came to be, [Philo Farnsworth]’s story is a good place to start.