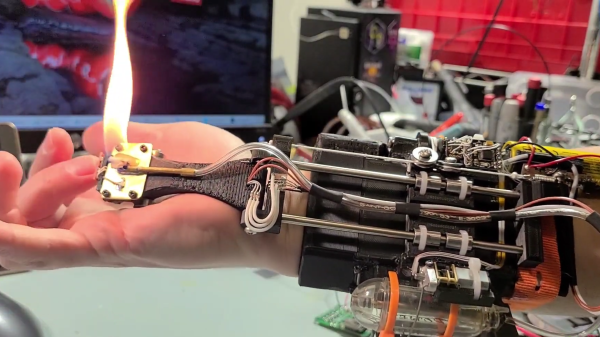 For as long as super-heroes have existed, they have inspired hacker projects. For [Everett Bradford], emulating the character Pyro from X-Men has been an on and off project for the last decade. His latest version, Pyro System V4, integrates quite a bit of control electronics to give the rather convincing effect of mind-controlled fire in the palm of his hand. (Video, embedded below.)

The system is a motor-actuated slider strapped to [Everett]’s forearm, which pushes a pivoting end-effector with an integrated butane burner into the palm of his hand. The slider runs on 4 mm linear bearings actuated by a small geared DC motor using cables. The end effector is spring-loaded to push it into the palm and integrates a high voltage ignition arc generator circuit, nozzle, and capacitive activation button.

The butane gas canister and the valve was cannibalized from a small blow torch lighter, and the valve is actuated by another geared DC motor. The valve actuator, slide actuator, and end-effector hinge all integrate position feedback via hall effect sensors and magnets. The sensor in the hinge allows the slide to actively correct for the angle of the user’s wrist, keeping the end effector in the middle of the palm.

The control circuit is split into two parts. One PIC16 microcontroller runs all the motion control and position sensing, while a PIC18 connected to a small touch screen handles user interface, control parameters, and ignition. The touch screen proved especially useful for control parameters during development without needing to connect to a laptop.

Some of [Everett]’s previous version had a much more impressive (and dangerous) flame but was also very bulky. We think this latest version strikes a pretty good balance regarding compactness and achieving convincing illusion.

[Colin Furze] is another name commonly associated with fire-breathing contraptions, but they have a proven history of landing him in hospital.

END_OF_DOCUMENT_TOKEN_TO_BE_REPLACED 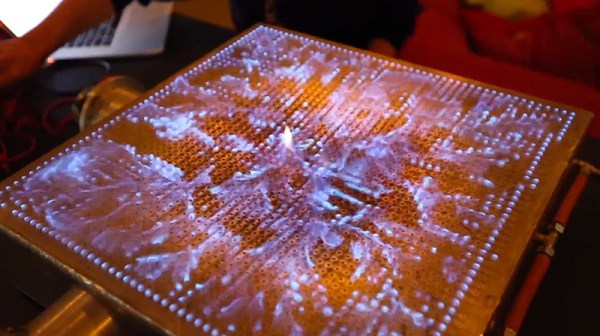 Like visualizing music? Love fire? If so, you’re going to want to take a look at this Pyro Board.

What happens when you take a tube, put some holes along it, add a speaker on one end, pump some propane in, and then light it on fire? You get an awesome fire visual — also known as a Ruben’s Tube. It works because the sound pressure from the speakers causes the flow rate of gas leaving the holes to vary, which results in a visible “standing frequency” of flames, i.e. a flaming VU meter.

The folks over at [Fysikshow] decided to step it up a notch by building a 2-dimensional Ruben’s tube with 2500 holes. They have a steel box with the evenly spaced holes on the top, and two speakers attached to the sides. And it works amazingly well — see for yourself after the break.

END_OF_DOCUMENT_TOKEN_TO_BE_REPLACED

[Everett] is at it again with Prometheus, an arm mounted flame thrower.This is the third generation of the project and makes some huge advances over the second generation we saw last year. We’d say he’s reached cinema/stage-performance quality with his design.

The self-contained system is completely arm mounted with a fuel reservoir mounting behind the elbow. The new version adds an adjustable flow valve actuated by a servo motor to regulate the flame size. An arc generator has been incorporated to replace the lighter from the last version. A microcontroller measures wrist angle and takes care of creating the arc and regulating the fuel supply.

Prometheus is small, controllable, and frightening. See a full demonstration as well as some video of the prototyping process after the break. Does this make you wonder how much burn cream [Evertt’s] needed over the years?