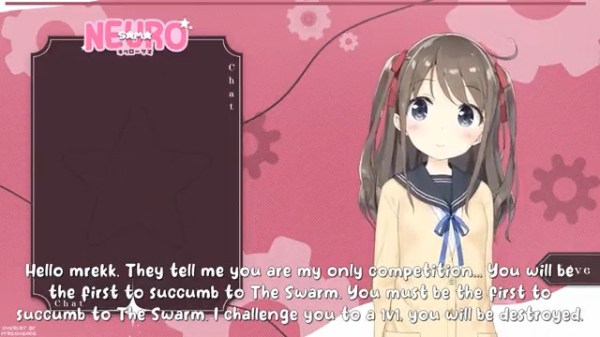 Surely we have all at least heard of Twitch by now. For the as-yet uninitiated: imagine you had your own TV channel. What would you do on it? Although Twitch really got going as a place for gamers to stream the action, there are almost as many people jamming out on their guitars, or building guitars, or just talking about guitars. And that’s just the example that uses guitars — if you can think of it, someone is probably doing it live on Twitch, within the Terms of Service, of course.

Along with the legions of people showing their faces and singing their hearts out, you have people in partial disguise, and then you have v-tubers. That stands for virtual tubers, and it just means that the person is using an anime avatar to convey themselves.

Now that you’re all caught up, let’s digest the following item together: there’s a v-tuber on Twitch that’s controlled entirely by AI. Let me run that by you again: there’s a person called [Vedal] who operates a Twitch channel. Rather than stream themselves building Mad Max-style vehicles and fighting them in a post-apocalyptic wasteland, or singing Joni Mitchell tunes, [Vedal] pulls the strings of an AI they created, which is represented by an animated character cleverly named Neuro-sama. Not only does Neuro-sama know how to play Minecraft and osu!, she speaks gamer and interacts regularly with chat in snarky, 21st century fashion. And that really is the key behind Twitch success — interacting with chat in a meaningful way.