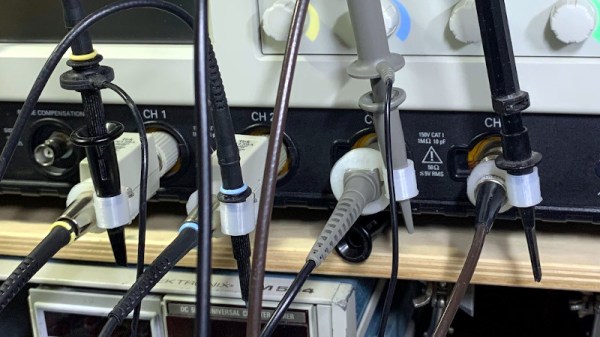 Sometimes the projects we write up for Hackaday require their creators to produce pages of technical explanation, while others need only rely on the elegance of the hack itself. The Scope Probe Caddy from [Tonyo] has probably one of the shortest write-ups we’ve linked to from a Hackaday piece, because its utility is self-evident just by looking at it.

It’s likely that everyone who has owned an oscilloscope will have encountered this problem: that multiple ‘scope probes soon manifest themselves into a tangled mess, an unruly octopus which threatens to overwhelm your bench. The probe organizer is an extremely simple solution tot his problem, a 3D printed clip which fits over the probe connector and into which the probe itself can also slot.

The clip comes as an OpenSCAD file, which starts with a range of size definitions for different types of probe connector. The Rigol we have here isn’t among them, but a very quick measurement with the calipers allowed us to enter the size of a Rigol probe connector at 11.5 mm. It’s not often we make something we’re  writing up as we’re writing it, but in this case a quick bit of 3D printing and we too have tidy probe storage. With the addition of a cable tie or a small nut and bolt it’s assembled, and now helps make a Hackaday bench a little clearer.

Once you’ve printed this organizer, you might want to turn your attention to the probe itself. 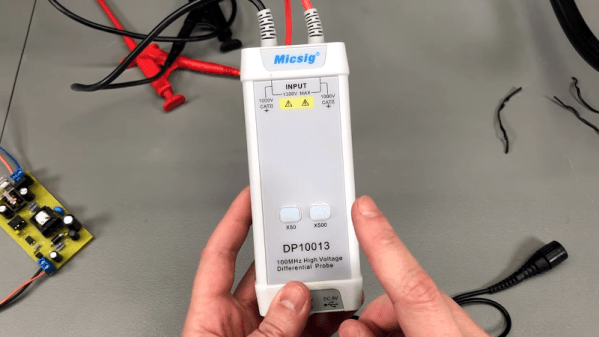 [Voltlog] often looks at interesting test equipment and in the video below he reviews something that isn’t very common in hobby labs: a differential oscilloscope probe. These are usually pretty expensive, but the Micsig probe in the video costs under $200. The question, of course, is what do you need with a differential probe?

A typical scope probe has a ground lead that connects directly to the actual grounding point. This can cause a problem if you try to measure across some component that has more voltage than you want to short to ground. It might hurt your device under test, your scope, or both.

END_OF_DOCUMENT_TOKEN_TO_BE_REPLACED 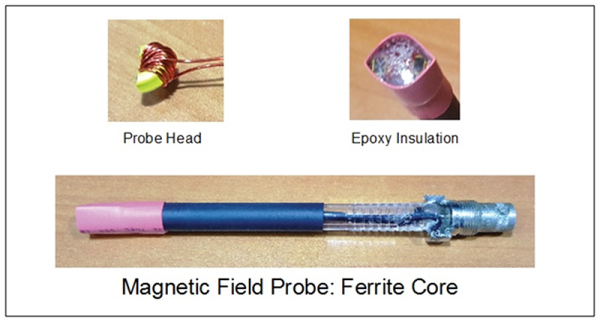