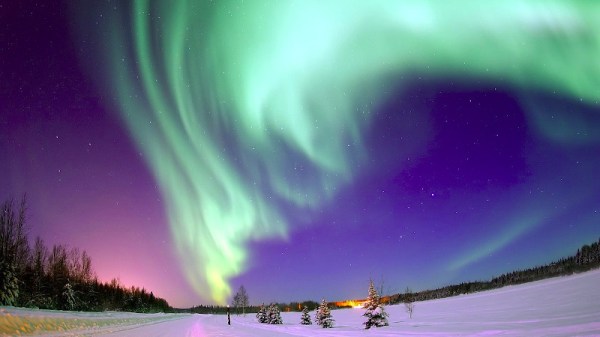 How do you look back over your life and divide it up? Maybe by decades, cultural moments, or geopolitical events. For radio amateurs with older callsigns there’s a temptation to do so by solar cycles, as the roughly 11-year period of the Sun’s activity had a huge effect on radio propagation through the charge it creates in the upper atmosphere. We’re now in solar cycle 25, numbered since the 18th century when the science of solar observation began, and as never before we’re surrounded by information from experts such as [Dr. Tamitha Skov], the so-called [Space Weather Woman]. When she says something is on the way we listen, so a recent Tweet predicting a direct hit from a solar storm with a good probability of auroras in lower latitudes is very much worth sharing.

We must extend our commiserations to readers in equatorial climes and ever through the lower half of the USA, southern Europe, the Middle East, India, Japan, and China. You won’t see the aurora we’ll catch in Europe along with our friends in New Zealand, Canada, Russia, and northern USA. But even then to those of us at moderate latitudes an aurora is a pretty rare event, so we’re hoping for clear skies on the 2nd of February and would advise you to look out too if you’re in the likely zone even if they won’t be quite as impressive as those in our header picture. Meanwhile radio amateurs everywhere don’t have to see pretty lights in the sky to reap the benefits in terms of propagation, so happy DX hunting! The Tweet is embedded below the break, so you can play the timeline for yourselves.

END_OF_DOCUMENT_TOKEN_TO_BE_REPLACED

Like many Victorian gentlemen of means, Richard Carrington did not need to sully himself with labor; instead, he turned his energies to the study of natural philosophy. It was the field of astronomy to which Carrington would apply himself, but unlike other gentlemen of similar inclination, he began his studies not as the sun set, but as it rose. Our star held great interest for Carrington, and what he saw on its face the morning of September 1, 1859, would astonish him. On that morning, as he sketched an unusual cluster of sunspots, the area erupted in a bright flash as an unfathomable amount of energy stored in the twisted ropes of the Sun’s magnetic field was released, propelling billions of tons of star-stuff on a collision course with Earth.

Carrington had witnessed a solar flare, and the consequent coronal mass ejection that would hit Earth just 17 hours later would result in a geomagnetic storm of such strength that it would be worldwide news the next day, and would bear his name into the future. The Carrington Event of 1859 was a glimpse of what our star is capable of under the right circumstances, the implications of which are sobering indeed given the web of delicate connections we’ve woven around and above the planet.

END_OF_DOCUMENT_TOKEN_TO_BE_REPLACED

In the hopes of getting a heads up on when the aurora borealis will be visible from his back yard, [Alex] built a magnetometer to measure disruptions in Earth’s magnetic field. The build is extremely simple, too. It’s amazing what you can build with a few components and a trip to the dollar store.

The design or [Alex]’s project is called a torsion magnetometers. In this setup, two mirrors are affixed to a permanent magnet connected to a string. A laser is shone onto the mirror and is reflected back to an array of sensors. In [Alex]’s case he used a simple laser pointer and a pair of photoresistors encased in a PVC tube.

[Alex] has been running his magnetometer in his back yard for over a month now and has the data to prove it. Luckily for [Alex], those graphs he has been generating may get a little more interesting. A coronal mass ejection is coming our way and is expected to hit today around 22:30 UTC. We’ll go outside to look for an aurora, but we’re sure [Alex] will be glued to his laptop tonight.