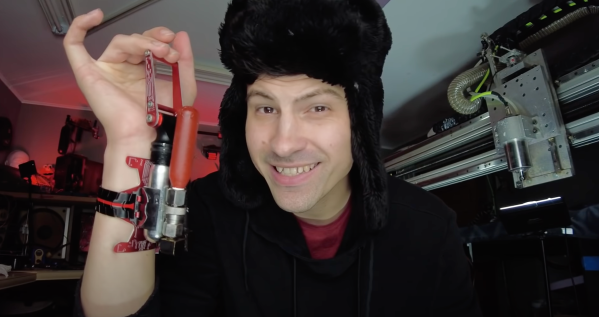 Despite reading Hackaday daily and seeing the incredible things that people do, something comes along that just sort of blows you away every once in a while. Sometimes it’s just technically impressive, but often it is just, “I didn’t think that anyone would try this or even think of this.” [Joel Creates] is one such example with his Spider-Man wrist-mounted web-shooters.

Previously, [Joel] had built a web-slinging system based around a pressurized tank of hot glue worn like a backpack. What it lacked in miniaturization, it made up for in functionality. However, [JT of Build IRL] created a grappling-based Spider-Man system that fired ropes which got [Joel] thinking that perhaps the hot glue and the grappling system could be combined for a smaller overall package.

His solution is quite simple. Old CO2 cartridges filled with glue and a small nozzle drilled in are loaded into a quick-connect fitting. The hot glue is heated via an induction coil on a small tool belt before loading. A thermally insulating layer of paint and micro-vacuum spheres on the canister helps [Joel] place it in the wrist shooter without burning himself. A bike tire inflator with a lever-activated system forms the main assembly of the shooter. Using compressed air, the system fires a glob of hot glue at a surface and a metal web-shaped disk with holes and a rope attached to the blob of hot glue. As the glue rapidly cools, the metal disk provides a lot of surfaces for the adhesive to hang onto. Overall, the results are pretty impressive, but the engineering challenges make for an exciting journey. Everything from failed prototypes to failed power supplies seems to happen on this build.

Combined with some electromagnets, you could really have the whole spider package.

Thanks [Carson B] for sending this one in! Video after the break.

END_OF_DOCUMENT_TOKEN_TO_BE_REPLACED 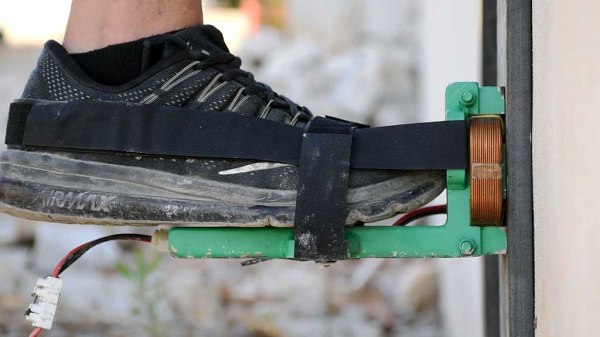 Want to climb a wall like Spiderman? No problem – just whip up a climbing rig with microwave oven transformers. And find a steel building. And rewrite the canon so that Peter Parker is bitten by an electromagnetic spider instead of a radioactive one.

Back in the reality-based world, you’d probably be taking you life in your hands if you use [Make It Extreme]’s rig to get more than a dozen feet above the ground. The basics are pretty sound, but the devil is in the details. Four MOTs are cut and stripped of their secondary coils and attached to fixtures for the feet and hands. A backpack full of gel cell batteries powers the rig, and simple normally closed switches in the handholds control both the foot and hand magnets on a side.  A click of a switch releases the magnets on one side, allowing the climber to reach up.

And therein lies our safety beef: what happens when you make a mistake and push both buttons at the same time? Seems like this build is screaming for some control circuitry that prevents this most obvious failure mode. We’re not ones to throw an Arduino at every problem, but in this case it may make sense, especially when it could monitor the charge remaining in the battery pack.

Still, like most dangerous stunts, this looks really cool. If you’ve got any ideas for improvements in the controls, leave them in the comments below. And if you’re interested in transforming yourself into a superhero, learn from a guy who’s actually doing it – our own [James Hobson]. Check out some of his builds, like the Captain America shield or his car-lifting exoskeleton.

END_OF_DOCUMENT_TOKEN_TO_BE_REPLACED

Spiderbot moves with four magnetic grapplers that it can launch, detach, and aim according to it’s path planning algorithm. While the robot is definitely not a final product and is quite a bit away from moving with the same grace and speed as our friendly neighborhood Spider-Man, it is definitely one of the more interesting locomotion experiments out there. The video has some nice slow motion footage of the main mechanisms as well as screen captures of the path planning.