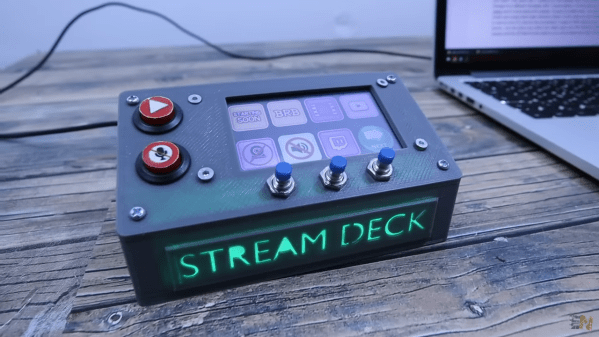 The one thing that separates the pros on Twitch from the dilettantes is the production values. It’s all about the smooth transitions, and you’ll never catch the big names fiddling with dodgy software mid-stream. The key to achieving this is by having a streamdeck to help control your setup, like this straightforward design from [Electronoobs]. (Video, embedded below.)

The build relies on an Arduino Micro, which is a microcontroller board perfectly equipped to acting as a USB macro keyboard. It’s paired with a Nextion LCD touchscreen that displays buttons for various stream control features, like displaying a “Be Right Back” screen or cuing up video clips. The build also features bigger regular buttons for important quick-access features like muting a mic. It’s all wrapped up in a 3D printed housing, with some addressable RGB LEDs running off another Arduino to add some pizazz. The neat trick is that the build sends keycodes for F13-F24, which allows for the streamdeck’s hotkeys to avoid conflicting with any other software using conventional keyboard hotkeys.

It’s a useful tool that would be of use to anyone streaming on Twitch or other platforms. Alternatively, you could repurpose an old phone to do a similar job. Video after the break.

END_OF_DOCUMENT_TOKEN_TO_BE_REPLACED 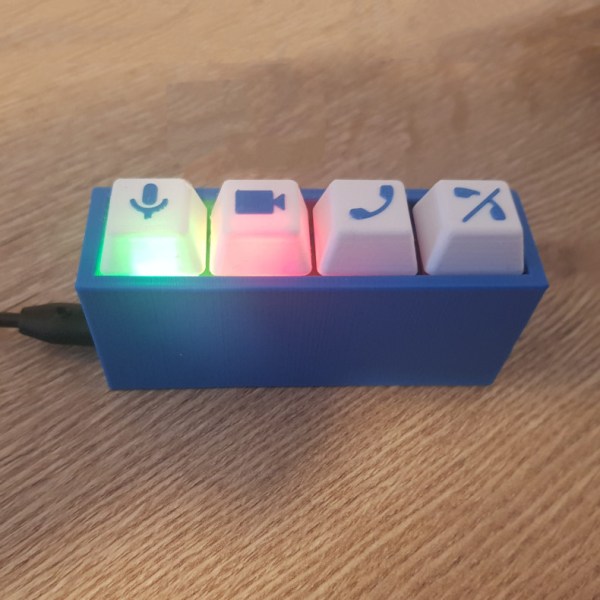 Working from home has now become de rigeur for many more people around the globe. With it, has sprung up a desire for better controls for streaming and conferencing software. There are plenty of streamdecks on the market, of course, but this isn’t BuyADay, it’s HackADay. Thus, you’ll want to check out this great build for Microsoft Teams by [Build Comics].

The build consists of a series of Cherry MX Silent Red key switches in a 3D printed housing, dedicated to muting audio, switching video, and making and hanging up on calls. Naturally, they’re marked with their individual functions and lit with RGB LEDs for obvious feedback. The keys are read by a Raspberry Pi Pico, which handles USB communication with the PC. AutoHotKey is then pressed into service to make the final link to the Microsoft Teams software. [Build Comics] also worked on a 3D-printed busylight that indicates when they’re on a call; however, thus far it isn’t quite working properly. Jump into the conversation on Github or comment below if you’ve got insight on the problem.

It’s a build that likely saves a lot of hassle when you’re on several calls a day. The mute button is a sure-fire jobsaver on some occasions, and it’s better to have it and not need it, then need it and not have it. We’ve featured work from [Build Comics] before, too – like this excellent vintage meter restoration. Video after the break.