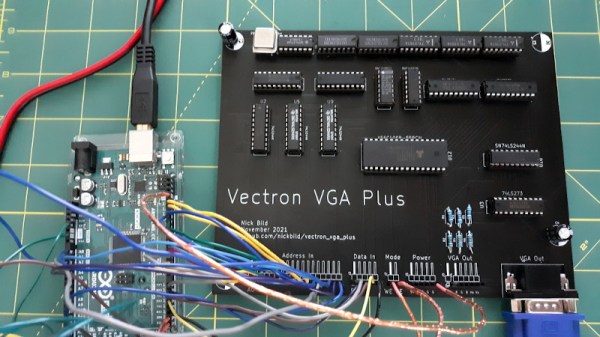 Over the years we’ve seen a number of hackers generate VGA with 74xx logic chips, but they’ve generally not been the most practical of builds. Often put together as part of a competition or purely for the challenge, these circuits are usually implemented in a mass of jumper wires and often take up multiple breadboards. Not exactly something you can toss in a drawer when you’re done with it.

But the Vectron VGA Plus, created by prolific hacker [Nick Bild], manages to improve on things considerably. Designed specifically to be smaller and simpler than its predecessors, the custom PCB contains far fewer chips than we’re used to seeing for this kind of thing. At the same time it provides a handy header row along the bottom that allows the user to connect whatever they’re working on, from microcontrollers to retro computers.

It looks like the PCB could still be shrunk down considerably if you’re really looking to maximize desk space, but we imagine for his purposes, [Nick] felt this was more than compact enough. Especially when you look at what the same circuit looked like during the breadboard phase. Yikes.

So, what did it take to simplify this 640 x 480 VGA interface? The short answer is adding more RAM. Wherever possible, dedicated hardware was replaced with software operations that could be performed by the externally connected device. [Nick] has provided some sample code for the Arduino that lets the microcontroller push data into the board’s memory and take control.

We can trace the origins of this project back a few years, to when [Nick] was working on adding an LCD to his homebrew 6502 computer. A few months later he put together the earlier version of this board, the Vectron VGA, before switching gears and handing VGA generation duty over to a FPGA. We’re excited to see the next evolution of this project, and given the track record of this particular hacker, we shouldn’t have to wait long before it hits our inbox. 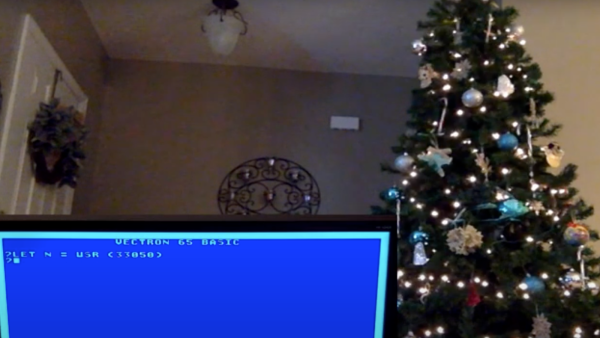 Not content to leave things alone, [Nick Bild] has updated his nearly practical breadboard 6502 Vectron project once again by adding Tiny Basic and home tree automation. Instead of using an LCD module like last time, or his custom-built VGA output using 7400-series logic, [Nick] chose to go modern this time and implemented a VGA output using a TinyFPGA BX.

Tiny Basic was one of the first versions of Basic released after Bill Gates famous open letter to hobbyists in 1976. While Altair Basic was selling for $150, Tom Pittman wrote Tiny Basic for the 6800 and sold it for only $5 (don’t worry, Tom has since made it free to use). We got a kick out of browsing the Tiny Basic manual and learning that our serial number can be found on the paper tape leader, and that a Teletype will generally receive one more character, at least, after getting the X-OFF control signal.

In the video, you can see [Nick] running a short Basic program and operating his Christmas tree lights from the Vectron, although it’s only on-off control. He suggests that a PCB version is in the works, but he’s having trouble deciding when to quit adding features.  That’s a conundrum we know all too well.

END_OF_DOCUMENT_TOKEN_TO_BE_REPLACED 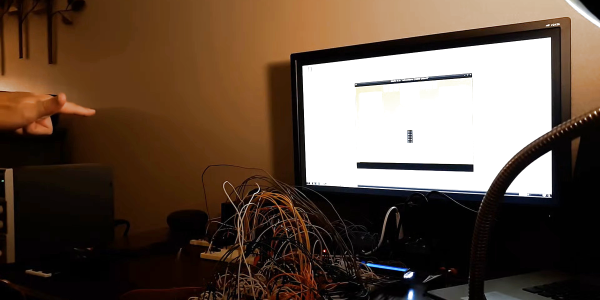 When it comes to machine learning algorithms, one’s thoughts do not naturally flow to the 6502, the processor that powered some of the machines in the first wave of the PC revolution. And one definitely does not think of gesture recognition running on a homebrew breadboard version of a 6502 machine, and yet that’s exactly what [Nick Bild] has accomplished.

Before anyone gets too worked up in the comments, we realize that [Nick]’s Vectron breadboard computer is getting a lot of help from other, more modern machines. He’s got a pair of Raspberry Pi 3s in the mix, one to capture and downscale images from a Pi cam, and one that interfaces to an Atari 2600 emulator and sends keypresses to control games based on the gestures seen by the camera. But the logic to convert gesture to control signals is all Vectron, and uses a k-nearest neighbor algorithm executed in 6502 assembly. Fifty gesture images are stored in ROM and act as references for the four known gesture classes: up, down, left, and right. When a match between the camera image and a gesture class is found, the corresponding keypress is sent to the game. The video below shows that the whole thing is pretty responsive.

In our original article on [Nick]’s Vectron breadboard computer, [Tom Nardi] said that “You won’t be playing Prince of Persia on it.” That may be true, but a machine learning system running on the Vectron is not too shabby either.