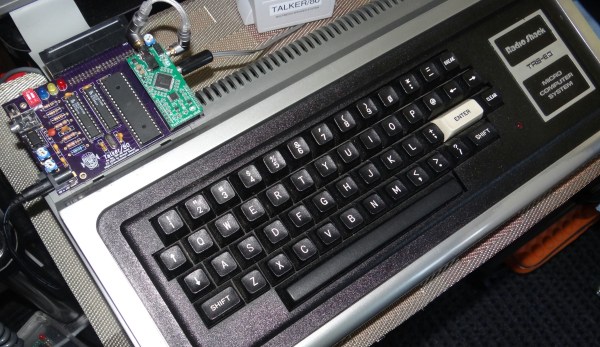 Like artificial intelligence, speech synthesis was one of those applications that promised to revolutionize computing in the 1980s, only to fizzle out after people realized that a robotic voice reading out predefined sentences was not actually that useful. Nevertheless, computer manufacturers didn’t want to miss out on the hype and speech synthesizers became a relatively common add-on for a typical home computer.

Those add-ons were usually built around a custom voice-synthesis chip. If that chip fails, you’re out of luck: many were made in limited quantities by small companies and are impossible to find today. So if you’ve got a Tandy TRS-80 Voice Synthesizer with a dodgy SC-01-A chip, you’ll definitely want to check out [Michael Wessel]’s Talker/80 project. It’s a plug-in module for the TRS-80 that’s software compatible with the original Voice Synthesizer, but built from modern components. Synthesis is still performed by a custom IC, but now it’s using the more common Epson S1V30120 text-to-speech chip. 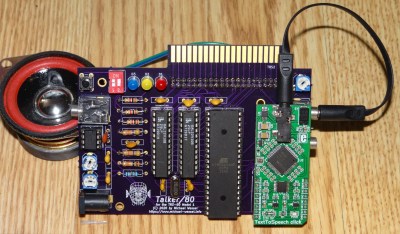 The Talker/80 also has an ATmega644, which connects to the TRS-80’s expansion port on one side and to the Epson chip on the other. It can either emulate the original SC-01-A, in which case it expects text to be split into separate phonemes, or it can be set to an “advanced” mode in which it can directly process normal English text. In either case the voice sounds quite different from what original, although the new voice is arguably a little clearer.

We’ve seen modern speech synthesizers made for several classic computers: you can hook up the same Epson chip to an Amstrad CPC, or an ESP8266 to a VIC-20. If you’ve got an actual working SC-01-A but no vintage computer to use it with, you can also control it with an Arduino.

END_OF_DOCUMENT_TOKEN_TO_BE_REPLACED 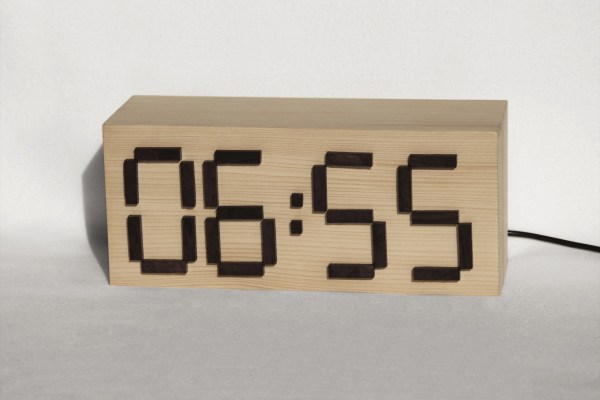