Gamifying life is silly, fun, and a great way to interact with those strangers who you pass everyday. Here’s one example that might just pop up along your next walk to work. It’s a way to take a very unscientific straw poll on any topic — you won’t even have to use your hands to cast a ballot.

A group called [Vote With Your Feet] has come up with a novel way of casting ballots. Simply walk down the sidewalk and through one of two doorways, each labeled with either side of a dichotomy. Each doorway is able to count the number of people that pass through it, so any issue imaginable can be polled. They already did vim vs emacs (59 to 27),  and we’d like to see Keynes vs Hayek, or even Ovaltine vs Nesquik. Users can send the machine new issues for the masses to vote on, so the entertainment is quite literally limited only by your imagination. 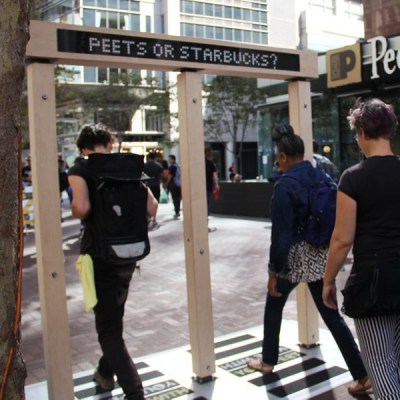 The physical build is well documented. Since this is used outside, the choice of a flipdot display (of course always fun to play with) is perfect for this high-contrast in any level of light. Each doorway has a break-beam sensor which is monitored by the Raspberry Pi driving the overhead display (here’s code for it all if you want to dig in).

The point of this art installation like this is to get people to interact with their environment in a novel way, which this project has accomplished exceptionally well. In 3 days, they registered over 10,000 votes which are viewable on their website. If you have a project in mind that calls for data visualization you might want to keep this in your back pocket.

We have also seen other ways that doorways can count people outside of voting, if you’re looking for any inspiration yourself.

A decade and a half ago, a developer testified that he was contracted to make code that would swing an election using electronic voting machines. In this year’s presidential primaries, exit polling significantly differed from official results, but only in precincts using unverifiable electronic voting machines. A democracy can only exist if the integrity of the voting process can be assured, and there is no international electoral oversight committee that would verify the elections in every precinct of the United States.

Your vote may not count, but that doesn’t mean you should wait for hours to cast it. This Hackaday Prize aims to end excessive waiting times at polling places, by giving voters a handy app to check the wait times they’re about to face.

The Qubie is a device that simply keeps track of how long voters are waiting in line at their polling place. The tech behind this is extremely simple – just a Raspberry Pi, WiFi adapter, and a battery. The device keeps track of how long voters have been waiting in line by looking at WiFi coming from smartphones. This data, which has a MAC address in there somewhere, is pseudorandomized and checked every minute or so to get a very good idea of how long a specific smartphone has been in range of the Pi. This data is then broadcast out to a server which figures out how long wait times are at a specific polling place.

In the recent California primary election, the Qubie was used at ten polling places in Shasta county. They logged a total of over 30,000 WiFi contacts and after a cursory examination of the data, saw the phenomena you would expect: surges in activity around lunchtime and at the end of the day. It’s a great project that gathers data that should be automated and public, and a great entry for the Hackaday Prize.

Last week we started the first round of community voting for The Hackaday Prize, where everyone on Hackaday.io has a voice in choosing the best project for the current theme of the week. To encourage people to vote, we’re giving away a $1000 gift card to The Hackaday Store to one person on hackaday.io if they have voted in the latest round of community voting. How are we doing that? A very, very large die and SQL queries:

No, no one won this week. That’s okay, because we’re giving t-shirts away to three random people who did vote. This week, [cgapeart], [Jeff], and [devonelliott] are getting t-shirts from the Hackaday Store, just because they were cool enough to vote.

We’re going to keep this round of community voting going for another week. Everyone registered on Hackaday.io gets 50 votes for each round of voting, and every Friday (around 20:00 UTC), we’ll randomly select one person registered on Hackaday.io. If that person has voted, they get a $1000 gift card for The Hackaday Store. If they haven’t voted — a t-shirt. They’re nice t-shirts, but I’d rather have the gift card.

I’ll be doing another round of random, fair die rolls and SQL queries next Friday. Until then, VOTE! 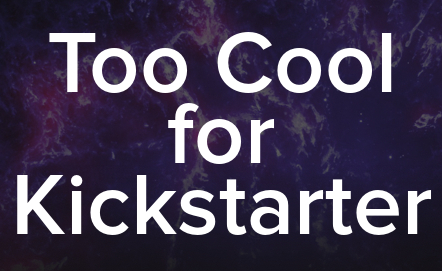 Round 3 of Community Voting has drawn to a close. This time around we had nearly 60,000 votes for 420 projects! The first voter lottery drawing didn’t turn up a winner, but on Friday we ended up giving away the bench supply. We’ll cover the projects with the top votes in just a moment, but first let’s take a look at the voter lottery prize for the new round. We’ve got so many prizes in the package for the fourth round of Astronaut or Not that we’re just showing you a few in this image.

On Friday morning we’ll be drawing a random number and checking it against the Hacker profiles on Hackaday.io. If that person has voted in this current round, they win. If not, they’ll be kicking themselves (emptyhandedly) for not taking part in the festivities.

Now onto the results:

END_OF_DOCUMENT_TOKEN_TO_BE_REPLACED

We have some of the Internet’s hacking elite judging The Hackaday Prize, and that means they can’t enter any projects into the prize. All the better for everyone else, we suppose. One of the judges, [Sprite_tm], is a resourceful guy and when it comes to judging the entries for The Hackaday Prize, he’s going to do what comes naturally to him: build a machine to automate the task.

[Sprite]’s plan for the JudgeTron 9001 is to use neural networks embedded in biological specimens to do the judging for him. Honestly, we really appreciate the effort he put in to this; biohacking is really in vogue right now, and we do love the classic throwback to the AI renaissance here. It certainly doesn’t hurt that he’s using a Raspberry Pi and an Arduino for this project, either.

Grabbing a touchscreen LCD and a few other parts out of his junk drawer, [Sprite] quickly whipped up a project that would display entries to The Hackaday Prize to the biologically embedded neural nets. These nets needed a little bit of encouragement to select winning entries, so a ‘feed’ back mechanism was laser cut out of acrylic, mounted to a servo, and filled with positive reinforcement.

The software running on the Pi crawls through the list of entries to The Hackaday Prize, extracting images from each one. The plan was for the biological neural nets to select winning entries and be rewarded via the feedback mechanism. These neural nets proved to be very sensitive to the sound of the servo gears of the feedback mechanism, and [Sprite]’s attempt at finding a winning entry with his creation has so far proved unsuccessful. Still, there’s a video of it in action, you can check that out below.

END_OF_DOCUMENT_TOKEN_TO_BE_REPLACED

Hey! It’s time for another round of Astronaut or Astronot, where we try to give away a jumbo power supply to someone on hackaday.io if they have voted in the most recent community voting round.

Before I get around to telling you who won, we need to go over the criticism of the current voting scheme. There’s a lot of valid criticism out there about how the algorithm that presents projects to the voting page is broken. Yes, it weights projects so some are seen more often than others. And yes, it can be frustrating. However, the results of the voting have no bearing on The Hackaday Prize (the space thing), and the purpose of the entire community voting is to get people looking at the projects, give away t-shirts to the project creators and 3D printers, o-scopes, and power supplies to random people who have voted. We listened to your suggestions and we’re tweaking the algorithm that presents projects for the next round of voting. That starts Monday, we’re doing the drawing on Wednesday, and votes don’t carry over from round to round.

With that out of the way, it’s time to do the whole ‘pick a random person on hackaday.io and see if they voted’ thing. For this week’s lottery, I chose five random people on the site, hoping I wouldn’t go through all of them before giving away a nice bench power supply. The first person, [in3rtial], didn’t vote. You just lost out on a really cool prize there, man.

The second person randomly selected was [tyler]. He voted a total of six times this round. I voted fifty times, but we’re not picky. That means he wins a nice power supply. Everyone go congratulate him for living somewhere that’s cheap to ship a power supply to.

That’s it for this round of Astronaut or Astronot. We’ll have a new round of voting up on Monday. For a change of pace (and because we’re going to be at DEFCON at this time next week), nevermind, we’re totally doing the drawing from DEFCON. Oh, and if you haven’t, you might want to submit a project to The Hackaday Prize. There’s still time, and your odds of winning something are really, really good.

Another week, another round of Astronaut or Astronot, the little lottery thing where we try to give away some fairly expensive tools to a random person on hackaday.io if they have voted for The Hackaday Prize. You should vote. Go here and do that.

This week, the random hacker selected was [oscar6ojeda], but he did not vote. This means he doesn’t get a huge bench power supply. Oh well. I’ll send him a t-shirt and a few stickers. That’s fair compensation for doing nothing, right?

We’re doing the same thing next week, so go here and vote. Voting in previous rounds doesn’t count, so you’ll only win the supply if you vote for The Hackaday Prize project with the most outrageous component.