We figure we have to start off this week’s links post talking about PETMAN. Boston Dynamics shows off the humanoid robot donning a full chemical suit. It’s a lot scarier than when we first saw it as a couple of legs a few years ago [Thanks Joshua].

Seeing something like that might drive you back to smoking cigarettes. But since that’s pretty bad for your health perhaps you just need a mechanical chain-smoking machine to take the edge off. That thing can really suck ’em down! [Thanks Mike]

Last week’s links included a bit about the Raspberry Pi 2.0 board version’s reset header. [Brian] wrote in to share a link for adding reset to a 1.0 revision board.

Speaking of RPi, [Elvis Impersonator] is using it to automate his garage door with the help of Siri.

In shop news, [Brad] needed to sharpen a few hundred pencils quickly and ended up melting the gears on his electric sharpener. Transplanting the parts to his drill press gave him more power to get the job done in about six minutes.

And finally, you can forget how to decipher those SMD resistor codes. Looks like surface mount resistors might be unmarked like their capacitor brethren. We were tipped off by [Lindsey] who got the news by way of [Dangerous Prototypes and Electronics Lab] We’ve thought of doing a project like this ourselves as the dehumidifier we ordered online runs the fan 24/7 no matter what the humidity conditions. But it wasn’t that [Davide Gironi] was unhappy with the features on his unit. It’s that the dehumidifier controller stopped working so he replaced it with one of his own design. The original humidity sensor was mechanical and simply broke. He used an AVR along with a humidity and frost sensor to get the appliance up and running again.

A DHT22 humidity sensor is polled by the ATmega8 chip and compared to the user-adjustable trimpot value. If it is above that threshold the unit is switched on using one of the relays seen in the image above. The one problem you have to watch out for when using compressor cooled appliances is ice accumulation on the radiator. [Davide] uses a thermistor for temperature feedback, switching the compressor off when it gets below 7C and turning it back on again when it is above 12C.

The replacement still uses the reservoir sensor and indicator LEDs. We, however, would recommend using the watchdog timer on the chip to ensure that it is reset if something goes wrong in the code. 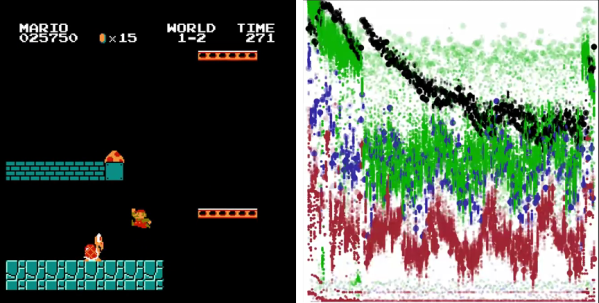 Some people know [Tom Murphy] as [Dr. Tom Murphy VII Ph.D.] and this hack makes it obvious that he earned those accolades. He decided to see if he could teach a computer to win at Super Mario Bros. But he went about it in a way that we’d bet is different that 99.9% of readers would first think of. The game doesn’t care about Mario, power-ups, or really even about enemies. It’s simply looking at the metrics which indicate you’re doing well at the game, namely score and world/level.

The link above includes his whitepaper, but we think you’ll want to watch the 16-minute video (after the break) before trying to tackle that. In the clip he explains the process in laymen’s terms which so far is the only part we really understand (hence the reference to voodoo in the title). His program uses heuristics to assemble a set of evolving controller inputs to drive the scores ever higher. In other words, instead of following in the footstep of Minesweeper solvers or Bejeweled Blitz bots which play as a human would by observing the game space, his software plays the game over and over, learning what combinations of controller inputs result in success and which do not. The image to the right is a graph of it’s learning progress. Makes total sense, huh?