[Jeff McGehee] or how he likes to be known, [The Nooganeer] just finished his first big tech project after finishing grad school. It’s a connected thermostat that makes use of his old iPhone 4, and a Raspberry Pi.

Ever since [The Nooganeer] bought his first home with his wife back in the spring of 2014, he’s had ever consuming dream of adding home automation to every appliance. As he puts it…

Home automation has always been a fascination of mine.  How much time and irritation would I save if I didn’t have to worry about turning things on and off, or wonder in which state they were left?  How much more efficient would my home be?  Wouldn’t it be cool to always know the state of every power consumer in my home, and then be able to record and analyze that data as well?

His first challenge was making a smart thermostat — after all, heating and cooling your house typically takes the most energy. Having used a Raspberry Pi before he figured it would be the best brain for his system. After researching a bit about HVAC wiring, [The Nooganeer] settled on a Makeatronics Solid State Relay board to control the HVAC. This allows him to use the GPIO’s on the Raspberry Pi in order to control the furnace and AC unit.

Now most thermostats just use a single thermosensor in order to 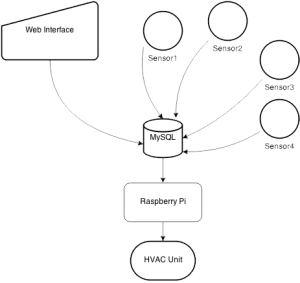 determine the temperature — since he’s got a Raspberry Pi, he figured he’d add temperature sensors in a few rooms using a Spark Core kit! The software he’s using is written in Python for visualizations, and he’s using a MySQL database in order to collect analytics.

It’s connected to the net to allow for easy monitoring and control from wherever he is, and since he had an iPhone 4 lying around he decided to use it as the display screen for the thermostat. His blog has tons of info on how he’s created the device, and in time he hopes to publish a more in-depth tutorial for people so they can connect their homes too.

Next up he plans on integrating humidity, light, and motion sensors into small wireless packages to place around the house. Maybe he’ll add a wireless outlet too…