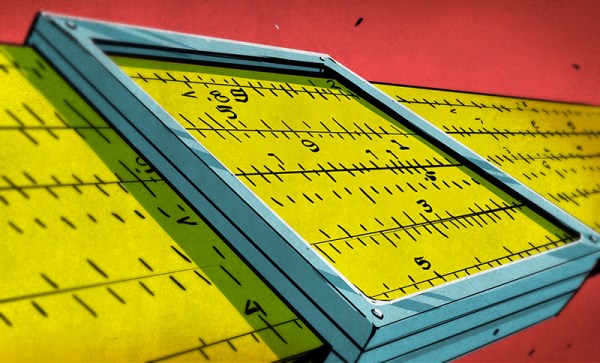 Unless you are above a certain age, the only time you may have seen a slide rule (or a slip stick, as we sometimes called them) is in the movies. You might have missed it, but slide rules show up in Titanic, This Island Earth, and Apollo 13. If you are a fan of the original Star Trek, Mr. Spock was seen using Jeppesen CSG-1 and B-1 slide rules in several episodes. But there was a time that it was common to see an engineer with a stick hanging from his belt, instead of a calculator or a cell phone. A Pickett brand slide rule flew to the moon with the astronauts and a K&E made the atomic bomb possible.

Slide rules are a neat piece of math and history. They aren’t prone to destruction by EMP in the upcoming apocalypse (which may or may not include zombies). Like a lot of things in life, when it comes to slide rules bigger is definitely better, but before I tell you about the 5 foot slide rule in my collection, let’s talk about slide rules in general.
END_OF_DOCUMENT_TOKEN_TO_BE_REPLACED 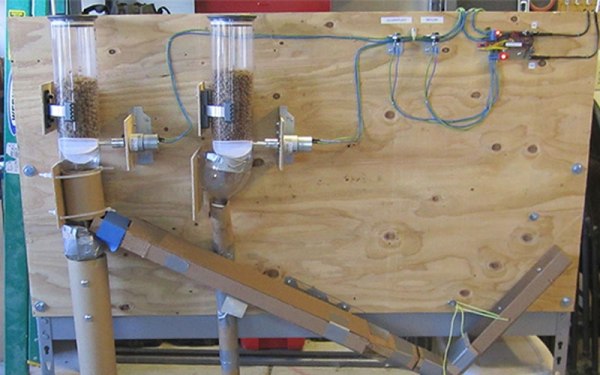 [Domiflichi] likes his cats, but not the drudgery of feeding them. So, like any good engineer, this simple problem became his next project: building an automatic cat feeder. Based on an Arduino, his creation beeps to let the cats know that it is dinnertime, then dispenses food into a number of bowls. There are also buttons for manual control. This lets him give individual cats a separate feeding. Rounding out the feature set, a DS1307 RTC tracks the feeding times.

One of the most interesting parts of his build is the transfer from breadboard to protoboard. This usually involves taking apart a working version, then putting it back together and trying to figure out why it doesn’t work anymore. [Domiflichi]’s problem (detailed in a follow-up post) was figuring out how to program the real-time clock module to set the time, because it looses the time when you disconnect the power. Rather than use the Arduino to program the RTC,  he used the battery backup feature of the RTC chip, programming it on his computer and then soldering it onto the board. He went on to remove the backup battery after the chip was in place. That’s a solution that will no doubt have many readers waving their fingers disapprovingly, but it worked.

It may seem overly complicated, but his project is worth checking out to see how he approached some of the engineering challenges. The food hoppers themselves are off-the-shelf cereal dispensers. We’ve seen other designs bootstrap this mechanism with 3D printed augers.

END_OF_DOCUMENT_TOKEN_TO_BE_REPLACED

Old mainframe computers are interesting, especially to those of us who weren’t around to see them in action. We sit with old-timers and listen to their stories of the good ol’ days. They tell us about loading paper tape or giving instructions one at a time with toggle switches and LED output indicators. We hang on every word because its interesting to know how we got to this point in the tech-timeline and we appreciate the patience and insanity it must have taken to soldier on through the “good ol’ days”.

[Ken Shirriff] is making those good ol’ days come alive with a series of articles relating to his work with hardware at the Computer History Museum. His latest installment is an article describing the strange implementation of the IBM 1401’s qui-binary arithmetic. Full disclosure: It has not been confirmed that [Ken] is an “old-timer” however his article doesn’t help the argument that he isn’t.

Ken describes in thorough detail how the IBM 1401 — which was first introduced in 1959 — takes a decimal number as an input and operates on it one BCD digit at a time. Before performing the instruction the BCD number is converted to qui-binary. Qui-binary is represented by 7 bits, 5 qui bits and 2 binary bits: 0000000. The qui portion represents the largest even number contained in the BCD value and the binary portion represents a 1 if the BCD value is odd or a 0 for even. For example if the BCD number is 9 then the Q8 bit and the B1 bit are set resulting in: 1000010.

The qui-binary representation makes for easy error checking since only one qui bit should be set and only one binary bit should be set. [Ken] goes on to explain more complex arithmetic and circuitry within the IBM 1401 in his post.

If you aren’t familiar with [Ken], we covered his reverse engineering of the Sinclair Scientific Calculator, his explanation of the TL431, and of course the core memory repair that is part of his Computer History Museum work.

Thanks for the tip [bobomb].