Bathymetry is the underwater equivalent to topography. And with the right map data, you can make some amazing 3D laser cut maps that feature both land masses — and the details under the sea. [Logan] just learned how to do this, and is sharing his knowledge with us.

[Logan] holds the typical hacker belief: The best way to learn something is just to start the project and figure it out as you go. Which also makes him an excellent candidate for helping others to learn what not to do. His goal of the project was to create a visually stunning map of Vancouver that helps to emphasize the depth of the ocean just off the coast.

To do this he obtained bathymetry data from the Fisheries and Oceans of Canada, and city map data from Open Street Map, a service we’re very familiar with that has provided data for many cool hacks, like this Runner’s GPS unit. The tricky part now is combining the data in order to laser it. 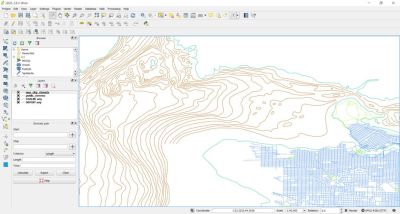 Enter QGIS, a free and open source geographical information system that allows you to edit and combine map data, and the best part — export to .dxf.

After he was happy with his new map file, it was time to get cutting. This will be pretty tedious depending on how much detail you decided to use, but the end result is oh so worth it.

Once it was all done, he also stained the ocean layers blue to give it more depth — if you wanted to get really creative, you could also do a dyed blue epoxy fill which would allow you to still see the detail — but look like water!

For more information on how to make laser cut maps of your city, check out this other project we covered last year — funny enough — also based in Vancouver.