When you create logic circuits using ICs or FPGAs, you can’t easily visualize their operation without special tools. But if you’ve ever seen a mechanical computer (like the Computer History Museum’s Babbage engine) operate, you know you don’t have that problem. Just like it is fascinating to watch a 3D printer or CNC machine, watching mechanical logic gates work can be addictive.

[Anthony] wanted to build some mechanical logic gates and set out designing them using Inkscape. Unlike some common mechanical gate schemes, [Anthony’s] gates use gears to implement the logic operations. He sent the designs off to a laser cutter service and got back parts cut from 3mm acrylic.

END_OF_DOCUMENT_TOKEN_TO_BE_REPLACED

[Jonathan Foote] made a really cool device: the Ommatid spherical display and controller. Part woodworking craft project, part art, and part tremendous hack, the Ommatid is something that we don’t really have a name for. But you can watch it in action, running demo code, in a video below the break.

The sphere design started out with a “20-sided regular polyhedron” with which D&D players should be familiar, and then divided each triangular face into four more triangles. An 80-sided die? Almost. One triangle’s worth was sacrificed for the part that mounts to the base.

Each facet contains an RGB LED and an IR sensor so that it can tell when a hand is nearby. All of this input and output is run through a Raspberry Pi, so both the sensing and display interactions are easily modified. [Jonathan] runs us through the electronics, programming, and interactivity in a separate Instructable. We really like [Jonathan]’s idea of turning this device into an OSC controller / display.

END_OF_DOCUMENT_TOKEN_TO_BE_REPLACED 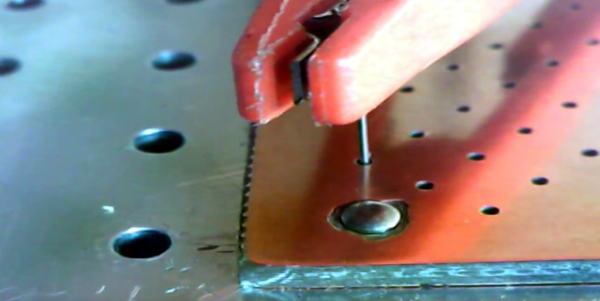 If you’ve ever made double-sided PCBs without professional equipment, you had to deal with connecting one side of the board to the other. You have a few obvious choices: 1) Rely on component leads to connect both sides (and solder both sides); 2) Create vias and solder wire to both sides of the board; or 3) Use through hole rivets. [Diyouware] had a different idea: use conductive ink. After a few false starts, they found a technique that seemed to work well.

This isn’t the first time we’ve heard of people trying conductive ink with varying degrees of success. The biggest problem, usually, is that the ink wants to run out of the hole. [Diyouware] has an interesting solution for this problem: Don’t drill the hole all the way thorough.

END_OF_DOCUMENT_TOKEN_TO_BE_REPLACED

We had to do a double take when we saw this kickstarter campaign video – and we bet you will too. It seem as if some company called [Infento Rides] took generic 80/20 aluminum extrusions and built a viable commercial product out of it – that’s not something you see everyday. 80/20 is meant to be something that engineers use to build things like test rigs and manufacturing fixtures. It’s not exactly an item designed for the consumer or end user. But we think the DIY/teaching aspect of this idea really has wheels.

If you’re looking for [Santa] to put this under the tree this Christmas, you might be disappointed as it’s not exactly on store shelves just yet since the kickstarter campaign just ended – but we wish them well, and hope they come through.

If you’re old enough you may remember Erector Sets (they were mechanical equivalent of the 200-in-1 electronics kits) back in the day. Well, this type of product brings back memories of both. It’s a perfect tool for getting kids interested in making – sure, they aren’t “making” much, but we all start somewhere.

The one thing we would like to see is a more open-source type kit like the Chibikart. That and something a little less then the $300-$500 price range.  But can you really put a price on teaching a child to build something, and starting that fire inside of them?  Maybe not.

END_OF_DOCUMENT_TOKEN_TO_BE_REPLACED

When you think of South Dakota you generally think of Mount Rushmore and, maybe, nuclear missiles. However, [Simeon Gilbert] will make you think of semiconductors. [Simeon], a student at South Dakota State University, won first place at the annual Sigma Xi national conference because of his work on a novel magnetic semiconductor.

The material, developed in collaboration with researchers from the nano-magnetic group at the University of Nebraska-Lincoln, is a mix of cobalt, iron, chromium, and aluminum. However, some of the aluminum is replaced with silicon. Before the replacement, the material maintained its magnetic properties at temperatures up to 450F. With the silicon standing in for some of the aluminum atoms, the working temperature is nearly 1,000F.

END_OF_DOCUMENT_TOKEN_TO_BE_REPLACED 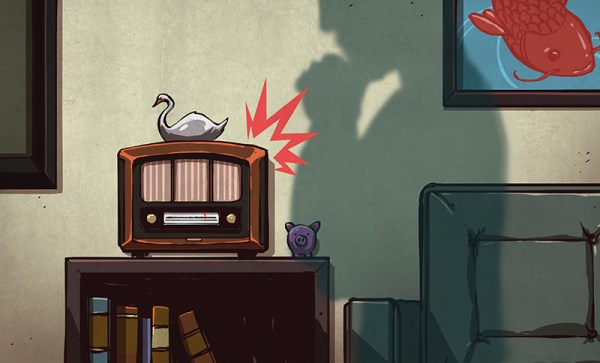 Shortwave radio is boring, right? Maybe not. You never know what intrigue and excitement you might intercept. We recently covered secret number stations, and while no one knows for sure exactly what their purpose is, it is almost surely involving cloaks and daggers. However, there’s been some more obvious espionage radio, like Radio Swan.

The swan didn’t refer to the animal, but rather an island just off of Honduras that, until 1972, was disputed between Honduras and the United States. The island got its name–reportedly–because it was used as a base for a pirate named Swan in the 17th century. This island also had a long history of use by the United States government. The Department of Agriculture used it to quarantine imported beef and a variety of government departments had weather stations there.

You might wonder why the United States claimed a tiny island so far away from its shores. It turns out, it was all about guano. The Guano Islands Act of 1856 allowed the president to designate otherwise unclaimed territory as part of the United States for the purpose of collecting guano which, in addition to being bird excrement, is also important because it contains phosphates used in fertilizer and gunpowder. (Honestly, you couldn’t make this stuff up if you tried.)

However, the most famous occupant of Swan Island was Radio Swan which broadcast on the AM radio band and shortwave. The station was owned by the Gibraltar Steamship Company with offices on Fifth Avenue in New York. Oddly, though, the company didn’t actually have any steamships. What it did have was some radio transmitters that had been used by Radio Free Europe and brought to the island by the United States Navy. Did I mention that the Gibraltar Steamship Company was actually a front for the Central Intelligence Agency (CIA)?

END_OF_DOCUMENT_TOKEN_TO_BE_REPLACED 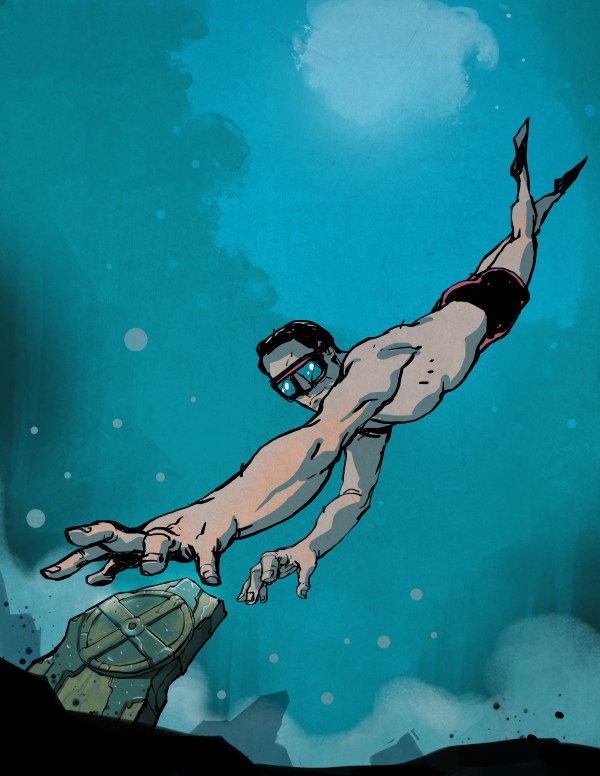 It’s no secret that a great deal of Western civilization was informed by the ancient Greeks. They revolutionized mathematics and geometry, developing astronomy along the way. They built ornate statues, beautiful temples to the gods, and amphitheaters for live entertainment with astonishing acoustics. The influence of the ancient Greeks shaped almost every field of human knowledge, from the arts and architecture to politics, philosophy, science, and technology.

Like the Babylonians, the Greeks paid close attention to the night sky. Our nearest celestial neighbor, the Moon, was particularly important to them from a planning perspective. For instance, debts might be due on the new Moon. By heeding the Moon’s phases and taking note of eclipse cycles, they found that their harvests were more fruitful, and they had fewer incidents at sea.

As savvy and well-rounded as ancient Hellenistic culture appears to have been, it’s not unreasonable to imagine that the Greeks could have created some kind of computing machine to make their Moon-centered scheduling easier. Based on fragments from in a shipwreck that was discovered in 1900, it seems they did exactly this. Based on scientific dating of the coins and pottery found in the wreck and inscriptions on the bronze remnants, historians and scientists believe the Greeks created a mechanical computer capable of calculating the positions of the Sun and the Moon on any given day. This marvelous device is known as the Antikythera mechanism.

The mechanism was housed in a wooden box and controlled with a knob on one side. It is believed that the front of the box was a display made up of a set of concentric rings with graduations, and that each ring corresponded with one celestial body. Pointers attached perpendicularly to output gears moved around the rings as the knob was turned, showing the paths and positions of these celestial bodies over time. This Earth-centric planetarium also displayed the phase of the Moon as well as the positions of the five major planets known to the ancient Greeks—Mercury, Venus, Mars, Jupiter, and Saturn.