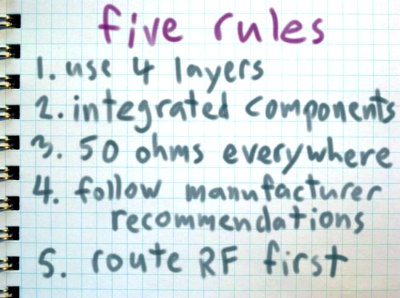 Four-layer PCB prices have gone way down, and having unbroken power planes on the inside of your board makes your design simpler and makes for a consistent RF environment throughout. You could build it on a two-layer board, but then when it doesn’t work, you’re going to need that pricey test equipment. Keeping the layout simple, with RF traces all on top and power planes in the middle, is insurance against the gremlins.

2. Use the Most Integrated Component Possible

Design your board around the most-integrated parts you can find. That’s going to mean picking an integrated transceiver IC that’s got everything in silicon. That’s a whole lot of tricky design work that you won’t have to do. The same applies to filters; you could spend hours designing a fancy filter and layout, or you could just find the right part ([Mike] likes SAW filters a lot) that fits your design.

Impedance matching: you just can’t get around it. Most manufacturers’ parts are built for 50 ohm inputs and outputs, though, so there’s no work for you to do there. Your only job is to make sure that the traces between the parts have a 50 ohm characteristic impedance. How do you do it? KiCad has a tool, and otherwise there’s the Internet. You just need to know some properties of your PCB from the manufacturer, plug them into a calculator, and then you get out a trace width that will give you 50 ohms across the board. Remember that unbroken power-plane in the second layer of your four-layer layup? It makes the same trace width work everywhere. That’s the hardest part of RF design, done.

What if you absolutely need to use a part that doesn’t work on a 50-ohm standard? Unless they don’t want your business, the manufacturer will provide you with a reference circuit that transforms the output to 50 ohms. Your job is to take advantage of the work of their applications engineers. There will often be a layout specified, sometimes even down to the part numbers. If they tell you how to get their chip’s input or output to work with a 50 ohm single-ended transmission line, you do it.

The RF signals are the most sensitive part of your circuit design. We already know what the desired RF trace width is, so all that’s left is laying them out. [Mike] advises you to keep the traces short, relative to the frequency of interest. After you’ve laid our your RF signals, keep your digital traces a little bit away from the RF traces whenever possible. That’s it.

In the second half of the talk, [Mike] walks through a number of his RF designs and demonstrates how he applied the simple five rules to build some interesting devices. Reference designs, short traces, and integrated parts abound. He wasn’t joking. In some of the devices, “the RF section was the easiest to lay out — I just copied it from the data sheets!”

We’re not going to work through his examples. We wouldn’t do them justice, and there are just a ton of RF design tidbits. You’re just going to need to watch the video. Enjoy!

45 thoughts on “Michael Ossmann Makes You An RF Design Hero”