If you had told 12-year-old me that one day I would be able to listen to pretty much any song I wanted to on demand and also pull up the lyrics as fast as I could type the artist’s name and part of the title into a text box, I would have a) really hoped you weren’t kidding and b) would have wanted to grow up even faster than I already did.

The availability of music today, especially in any place with first world Internet access is really kind of astounding. While the technology to make this possible has come about only recently, the freedom of music listening has been fairly wide open in the US. The closest we’ve come to governmental censorship is the parental advisory sticker, and those are just warnings. The only thing that really stands between kids’ ears and the music they want to listen to is parental awareness and/or consent.

However, the landscape of musical freedom and discovery has been quite different in other corners of the world, especially during the early years of rock ‘n roll. While American teens roller skated and sock-hopped to the new and feverish sounds of Little Richard and Elvis Presley, the kids in Soviet Russia were stuck in a kind of sonic isolation. Stalin’s government had a choke hold on the influx of culture and greatly restricted the music that went out over the airwaves. They viewed Western and other music as a threat, and considered the musicians to be enemies of the USSR.

But the draw of music tends to upstage politics. In the late 1940s, a Polish man came into Leningrad and started a small operation to cut amateur recordings on a recording lathe that he salvaged from the war. He ran a side business after hours on the same equipment and used it to bootleg records smuggled in from Eastern Europe. Other people began to build homemade versions of his lathe and soon, every kind of forbidden music that people had a taste for—American boogie woogie, jazz, and rock ‘n roll to Russian émigré and gypsy music—was available on the streets in a new kind of black market. 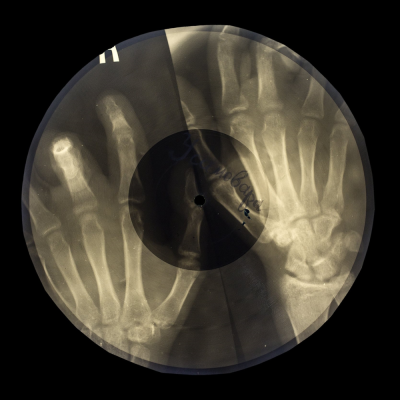 Someone soon figured out that x-ray film was a good medium for making records. It held up to the initial groove cutting as well as playback, making it ideal for producing large quantities of bootlegs. It just so happened that medical x-ray films were discarded en masse by hospitals and so they were liberated from trash bins by opportunistic bootleggers. The recordings cut into these x-ray films were gritty, crackling reproductions of the originals, but they were nonetheless highly sought after. A large market opened up for these flexible records. They were easily stowed up the sleeves and under the coat flaps of the street dealers who sold them for a few rubles each or a bottle of vodka.

These bootlegs were fittingly referred to as “bones” or “ribs” by those in the know. In Russian, they are called roentgenizdat, loosely translated as ‘x-ray pressed’. The practice of record bootlegging became widespread. Eventually, the Russian government cracked down on the distribution rings and sent the leaders to jail. The practice continued until about 1966, when the black market was taken over by reel-to-reel tapes.

Soon afterward, the government approved reel-to-reel use by the citizens and the market shrank. Today some roentgenizdat can be bought for for a wide range of prices depending on the rarity and novelty of the record. Fortunately, someone has digitized a handful of the recordings for your listening pleasure.

In January of this year, NPR interviewed Stephen Coates, a British musician who unearthed one of these x-ray records while touring in Russia. His discovery led him down a rabbit hole of research that ultimately led to the X-Ray Audio Project, which includes a book on the subject and the short documentary that’s embedded after the break. Another video features several snippets from these “bone records”, which are chilling in their rawness and the history they represent.

Thanks to @motherslug for making me aware of this particular piece of music history.