Highlights are the singing “Daisy Bell” at 9:05, which inspired Stanley Kubrick to play a glitchy version of the track as Dave is pulling Hal 9000’s brains out, symbolically regressing backwards through a history of computer voice synthesis which at that point in time was the present. (Whoah!) 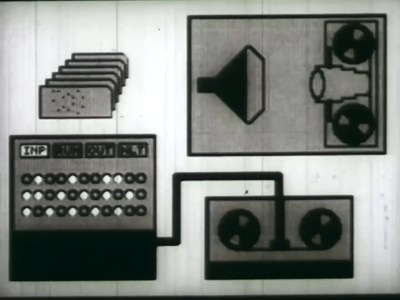 Anyway, we think it’s great to look back at these things and realize how simultaneously similar and different the early days of our modern technology were. One thread they got wrong was thinking that physically modelling the inner ear would help with speech synthesis — all you have to do is make the right sounds. But one thing they got right was the all-in-one drag-and-drop circuit simulation application shown in the beginning. They had some really functional GUIs back then, considering the tech.

And that reminds us that we wanted to work on integrating SPICE modelling into our circuit design flow. You know, to catch up with the late 1960’s.

Thanks [Simon] for the trip down (someone else’s) memory lane.

21 thoughts on “Retrotechtacular: The Incredible Machine”