The majority of passive oscilloscope probes contain an attenuator to both isolate the circuit under test from the capacitance of the cable, and compensation capacitors in parallel with each of the resistances to cancel out the effect of the capacitance of the cable. The attenuator is usually chosen to divide the input voltage by ten, hence you will see “10x” probes. The reading on the ‘scope is then a tenth of the voltage at the probe, for example a 1 V level will measure as 100 mV. Many ‘scopes will automatically convert this to the true figure if their settings indicate the probe type.

One of the compensation capacitors will be adjustable, to fine-tune the response. The ‘scope will have a calibrated square wave output, usually at 1 kHz, to which the probe is attached, and then the capacitor is adjusted until the wave displayed on the screen is truly square. Too much capacitance and the probe has the effect of a low-pass filter, while too little and it becomes a high-pass filter. It should become a semi-regular part of bench maintenance to check your probe against the calibration terminal, and to adjust it accordingly if the displayed waveform is not a square wave. 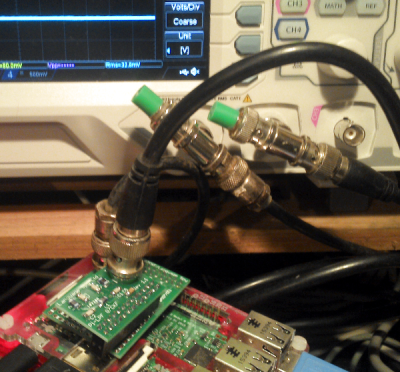 The probe is designed to present a high impedance to a circuit in situ, and not to distort the resulting displayed waveform. However there are times when it is necessary to measure an output that expects a low impedance, such as a 50 ohm source. In this situation the source must be terminated with the same impedance, so it should be fed into a 50 ohm resistor.

Some ‘scopes have a 50 ohm input mode, making this a matter of button pressing. Otherwise, a measurement can be made across the termination resistor, but since the impedance has now been reduced to a point at which small capacitances no longer have a significant effect, it becomes unnecessary if the cable to the oscilloscope is reduced to the barest minimum. In these cases you can dispense with the probe entirely if you have a BNC T-piece and a 50 ohm  terminator, and put both terminator and T-piece on the end of your cable directly coupled to the BNC socket on the ‘scope.

For many readers this basic primer on the operation of an oscilloscope input and probe will be old hat. But I remember my first oscilloscope, and how it gave me odd-looking results because I was too young to have been taught about probe compensation. When you get your first ‘scope it’s tempting to think that the ‘scope is the main event, without realising that it’s only as good as how you connect it to your circuit under test.

29 thoughts on “How An Oscilloscope Probe Works, And Other Stories”