A few weeks ago an incredible video of an engine exploding started making the rounds on Facebook. This particular engine was thankfully in a dyno room, rather than sitting a couple of feet away from a driver on a track. We’ve all seen engine carnage videos before, but this one stands out. This diesel engine literally rips itself apart, with the top half of the engine flipping and landing on one side of the room while the bottom half sits still spinning on the dyno frame.

Building performance engines is part science, part engineering, and part hacking. While F1 racing teams have millions of dollars of test and measurement equipment at their disposal, smaller shops have to operate on a much lower budget. In this case, the company makes their modifications, then tests things out in the dyno room. Usually, the tests work out fine. Sometimes though, things end spectacularly, as you can see with this diesel engine.

The engine in question belongs to Firepunk diesel, a racing team. It started life as a 6.7 liter Cummins diesel: the same engine you can find in Dodge Ram pickup trucks. This little engine wasn’t content to chug around town, though. The Firepunk team builds performance engines — drag racing and tractor pulling performance in this case. Little more than the engine block itself was original on this engine. Let’s take a deeper look.

A stock Cummins 6.7 produces 385 horsepower. This engine had been modified to produce over 2,212 horsepower. This kind of insane power requires changing just about every engine part. Bigger turbos for more boost — 146 psi in this case, larger pistons, and a stronger crankshaft to handle those pistons. A performance camshaft timed for power was added and an upgraded valvetrain brought in to handle the increased load. 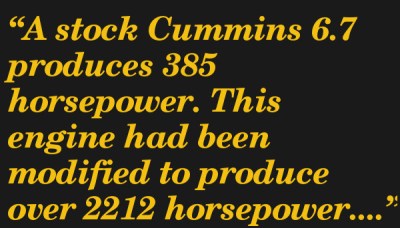 Generally the last part someone would change would be the engine block itself. The block is the shell of the engine, which holds all the other pieces. Manufactured engines are generally cast parts. In this case, the block is made of cast iron. That’s exactly where the failure happened.

In the video, you can watch the failure happen in slow motion, from several different angles. The initial point of failure was at the rear of the engine. Maybe there was a casting defect, a microscopic crack or void. The crack quickly spread under the pressure of the running engine. The extreme pressures in the engine started rushing out, expanding the crack further. As the crack spread, the pistons began binding in the cylinders, forcing the top and bottom of the engine even further apart. The crack quickly zipped around the engine. The rear section where the failure started was launched up and over, flipping the entire top half of the engine up and away. Pistons were ripped from their wrist pins, connecting rods bent. Nearly every part of the engine was damaged or destroyed in the cascade. Somehow the head and valve train survived the carnage, but everything else went straight to the scrap heap.

Since Firepunk’s engine was on a dynamometer when it failed, plenty of data on the failure was available. Many armchair mechanics surmised that the engine was running low on oil. Not true, and Firepunk had the data to prove it. The oil pressure was steady at 66 psi when the failure occurred.

One thing to note is what you don’t see in the video: oil pouring out everywhere from the broken engine. This engine was fitted with a dry sump system. Most engines use a wet sump system where the sump (aka oil pan) catches and stores the oil to be circulated around the engine. This works, but it’s not an optimum setup. Oil pressure in the sump can vary as the vehicle experiences varying g-forces of racing. Hot oil in a hardworking engine isn’t allowed to cool before being recirculated back to the engine. A dry sump system adds an external reservoir and pump to the system. Oil is pumped from the engine sump to top of the reservoir, where it passes through several baffles. The oil cools as it drops through the reservoir. At the bottom of the sump the now cool oil is pumped back into the engine. A system like this is actually better for the engine than a wet sump, however there are more parts, which means more points of failure, and more expense. In street cars, you’ll generally only find dry sumps on sports cars like the Chevrolet Corvette.

Many an engineer will tell you that testing is all about finding the weakest point. In this case the team found it — the engine block itself. The Firepunk team says they’re currently having a billet block machined, and will be back testing in no time.

66 thoughts on “Fail Of The Week: Engine Flips Out”