We see a ton of antique radios turned into Internet radios. Perhaps this is fine if the internals are beyond saving, but what about great old AM radios which still work? Pull them out and try your hand at vintage repair because you’re about to start your own broadcasts that make them relevant once more.

The Hard (But Fun) Way: Build Your Own Tube Transmitter

For many audiophiles, you can do no better than a tube amp, so why not take the same stand on your AM transmitter build. You can build your own from scratch using some go-to home AM transmitter designs that have been around for the last 60 or 70 years.

We like Evan’s AM transmitter design which traces its lineage all the way back to a 1939 Zenith model S-7000 Wireless Record Player transmitter. After building the circuit as recommended, he began tweaking the design and ended up with the project box seen above that works with three different tubes.

Phil’s transmitter design, called the Li’l 7, is one you should consider as well. It has extensive documentation, including Bill of Materials (and where to source them!) and assembly instructions. The image we included above is particularly fun; it’s not one of Phil’s but a breadboard version built by a fan of the design.

For a more advanced single-tube AM transmitter you have to check out Robert Weaver’s design which uses a compactron. The compactron is basically 3 tubes crammed into one envelope. These were popularly used as cost-saving devices in later-model vacuum tube television sets.

The Easy Way: Buy an AM Transmitter. 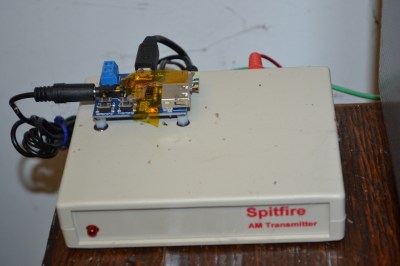 As for me, I have two young children, a demanding job, and not as much time as I used to. I wanted something that would work straight out of the box. I also wanted decent quality modulation so I didn’t want to use a grid modulated AM transmitter. Given these requirements I settled on the Spitfire.

Spitfire’s output is only 100mW into a very short inefficient antenna. I’ve found that by adding more wire you can significantly increase the range. I’m sure that if a really long wire were used you could cover your entire block, but not much further.

You need not be limited to my suggestion, other AM transmitter options include the SSTRAN, and the ‘talking house‘. Grab an old phone, iPod, or even a reel to reel as your music source; anything with a headphone jack that plays audio will do. I looked around and found this inexpensive bare-board MP3 player on eBay and simply glued it to the top of the box.

Most of the fun in this is actually locating and loading up unique content, putting it in the right sequence — you know, being an AM radio DJ!

My preference is for pre-1950’s jazz and swing music, so I loaded my playlist accordingly. But this wasn’t enough, after some digging I found numerous WW2 news bulletins from the front as well as recordings of music programs.  I also found these vintage commercials which can be fun to sprinkle into your playlist.

There are also some excellent recordings of pirate AM broadcasts available online. One called ‘Grosse Pointe Gardens’ is my favorite. It is basically an entire quasi-live jazz concert broadcast by someone out of his basement from a suburb of Detroit. The quality and creativity are absolutely amazing. It sounds as if a pre-war radio program bounced off a large cloud of interstellar dust back to earth many light years later. You can have a listen here and even download the file to add to your short-range AM radio station’s playlist.

Dust Off Those AM Radios, There’s Something Good On!

Below is a demo of my short-range AM transmitter operating a pre-war battery set, a mid-century Telefunken tabletop radio, and two WW2 military radios. I didn’t build my own transmitter, but I’m having a lot of fun and I may take on one of those transmitter designs as a future project. For now, I’m happy to tune into something that I want to hear on myAM dial!

53 thoughts on “Dust Off Those AM Radios, There’s Something Good On!”