Star Trek has its universal language translator and now researchers from Facebook Artificial Intelligence Research (FAIR) has developed a universal music translator. Much of it is based on Google’s WaveNet, a version of which was also used in the recently announced Google Duplex AI. 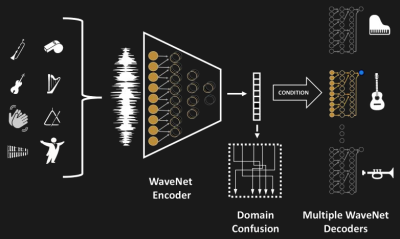 The inspiration for it came from the human ability to hear music played by any instrument and to then be able to whistle or hum it, thereby translating it from one instrument to another. This is something computers have had trouble doing well, until now. The researchers fed their translator a string quartet playing Haydn and had it translate the music to a chorus and orchestra singing and playing in the style of Bach. They’ve even fed it someone whistling the theme from Indiana Jones and had it translate the tune to a symphony in the style of Mozart.

Shown here is the architecture of their network. Note that all the different music is fed into the same encoder network but each instrument which that music can be translated into has its own decoder network. It was implemented in PyTorch and trained using eight Tesla V100 GPUs over a total of six days. Efforts were made during training to ensure that the encoder extracted high-level semantic features from the music fed into it rather than just memorizing the music. More details can be found in their paper.

So if you want to hear how an electric guitar played in the style of Metallica might have been translated to the piano by Beethoven then listen to the samples in the video below.

And while you discuss this work in the comments below, enjoy the following full translation of sample #13, where a Midi rendering of Elvis Presley’s version of Always on My Mind was translated to a symphony in the style of Mozart.