[Mr. Carlson] bought a Globe Scout Model 40A ham radio transmitter at a hamfest. The 40A was a grand old transmitter full of tubes, high voltage, and a giant transformer. It is really interesting to see how much things have changed over the years. The transmitter is huge but has comparatively few parts. You needed a crystal for the frequency you wanted to talk. There were two little modules that were precursors to hybrid circuits (which were precursors to ICs) that were often called PECs or couplates (not couplets) but other than those, it is all tubes and discrete components beautifully wired point-to-point.

The really surprising part, though, is the back panel. There’s a screw terminal to drive the coil of an external coaxial relay that has line voltage on it. There’s also a plug on the back with exposed terminals that has plate voltage on it which is considerable. In the 1950s, you assumed people operating equipment like this would be careful not to touch exposed high voltage. 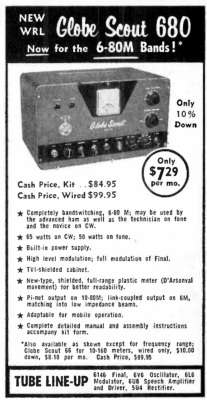 [Mr Carlson] does a great job of walking through the schematic and, of course, also fires the radio up and looks at the output with a communication monitor. It has been a long time since we’ve loaded up a tube transmitter and watching it done while looking at the output was very nostalgic.

We were surprised the little transmitter only managed about 20 watts out. A single 6146 should be able to get to 50 watts, but perhaps the final is worn out. The ad to the right is from a 1957 issue of Popular Electronics is for a similar model. It claims 60 watts out. You should note that the $100 price didn’t include coils which you could buy for each band, nor did it include crystals, a microphone, or a key. A 1955 article referenced this exact model:

Compact indeed. The power supply connection is the one on the back panel with the exposed high voltage. The radio already had its electrolytics replaced — a topic of hot contention lately. If you want to build your own tube-based AM transmitter, you might want to have soup for lunch.