Everyone’s heard of the “black box”. Officially known as the Flight Data Recorder (FDR), it’s a mandatory piece of equipment on commercial aircraft. The FDR is instrumental in investigating incidents or crashes, and is specifically designed to survive should the aircraft be destroyed. The search for the so-called “black box” often dominates the news cycle after the loss of a commercial aircraft; as finding it will almost certainly be necessary to determine the true cause of the accident. What you probably haven’t heard of is a Quick Access Recorder (QAR). 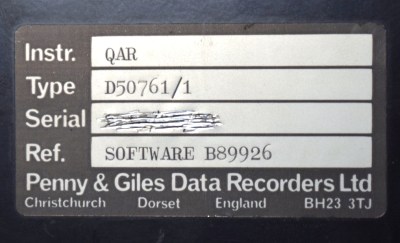 While it’s the best known, the FDR is not the only type of recording device used in aviation. The QAR could be thought of as the non-emergency alternative to the FDR. While retrieving data from the FDR usually means the worst has happened, the QAR is specifically designed to facilitate easy and regular access to flight data for research and maintenance purposes. Its data is stored on removable media and since the QAR is not expected to survive the loss of the aircraft it isn’t physically hardened. In fact, modern aircraft often use consumer-grade technology such as Compact Flash cards and USB flash drives as storage media in their QAR.

Through the wonders of eBay, I recently acquired a vintage Penny & Giles D50761 Quick Access Recorder. This was pulled out of an aircraft which had been in service with the now defunct airline, Air Toulouse International. Let’s crack open this relatively obscure piece of equipment and see just what goes into the hardware that airlines trust to help ensure their multi-million dollar aircraft are operating in peak condition. 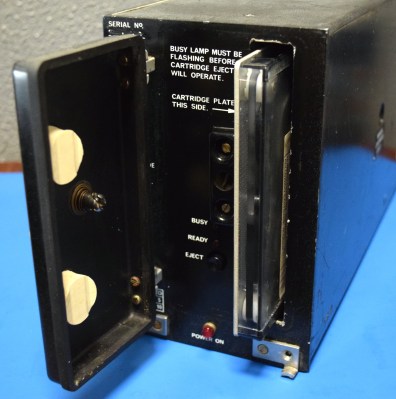 The Quick Access Recorder might not be intended to survive in a crash, but it’s still an expensive piece of hardware installed in an even more expensive aircraft, so this thing is still built like a tank. The case itself is best described as a metal shoe box: the bottom and sides have all been expertly welded together to create one continuous piece of metal, and only the top “lid” can be removed by loosening twelve captive screws around its perimeter.

The front of the QAR has a handle and some locking tabs, so it looks like this device was meant to slide into an electronics rack of some type rather than being permanently mounted. There’s a power LED down at the bottom, but everything else is covered by a locking door during normal operation. Under the door is a slot for the tape the device stores its data on, status LEDs marked BUSY and READY, and an Eject button. Interestingly the Eject button is electronic rather than being connected to a physical mechanism, but it did help explain why the QAR arrived to me with a tape stuck inside of the drive.

I was able to remove the tape from the QAR without too much trouble, but unfortunately it doesn’t provide us with a whole lot of information to go on. The label says it was put into the QAR on December 10th, but doesn’t say what year. It seems like the field all the way to the right is the registration code for the airplane: TFELM. Searching that does show a Boeing 737-300 with a matching registration still flying as of the early 2000’s, so that could be our donor bird. 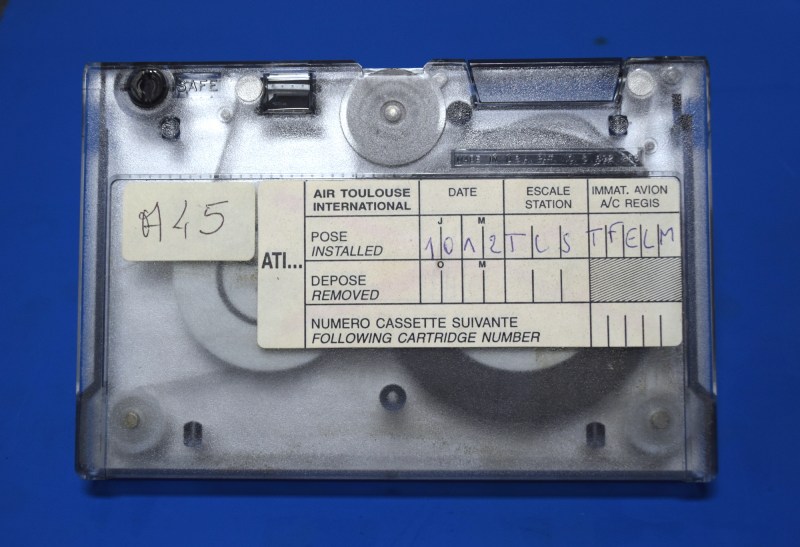 The tape itself is a 3M QIC Data Cartridge, and judging by the number of tracks and approximate vintage I think it’s a DC300XL which holds a whopping 20 MB of data. While antiquated now, it’s worth noting that much like modern QARs, the D50761 did use contemporary consumer-grade storage media.

Control Boards are a Retrocomputer in a Box

On the underside of the D50761’s lid, we’re presented with a gorgeous display of proper 1980’s engineering. Three separate boards are stacked on top of each other using aluminum standoffs, and are interconnected with a 64 pin ribbon cable. Helpfully, it even says what each one does right on PCB silkscreen. 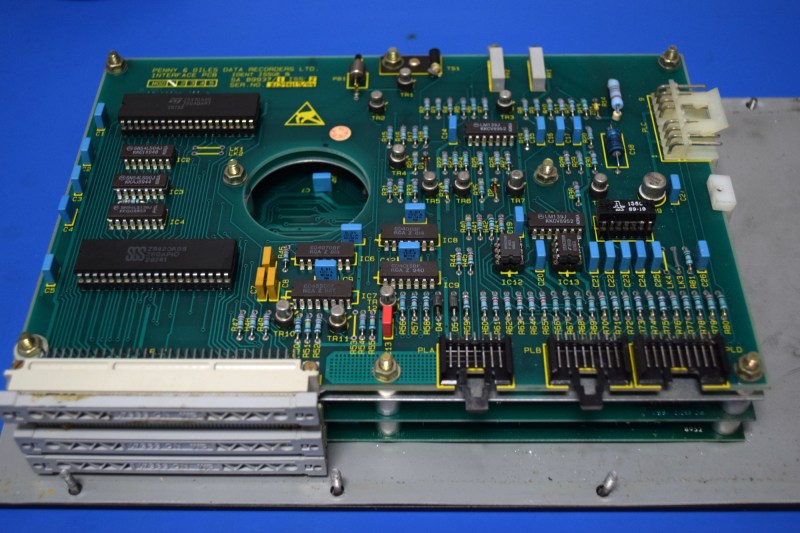 First up in the stack is the “Interface PCB”. This board accepts the inputs from various sensors and systems onboard the aircraft on the three black connectors, which travel through an array of resistors and ultimately to the various ICs which are in charge of decoding their signals. These include Motorola LM139J comparators along with a National Semiconductor UA9638RM and a Fairchild UA9637ARM which are RS-422 line drivers. The signals from these ICs then travel across the board to the Z8420AB6 parallel I/O controller and Z8470AB6 UART, which send their output to the next board in the stack via the ribbon cable.

The middle board is the “CPU PCB”, which is home to the system’s 4 MHz Z8400AB6 CPU, Z8410AB6 DMA controller, and ten HM-6514 chips for a total of 5 KB of SRAM. This board also has three UV EPROM chips which contain the computer’s software. It’s interesting to note that unlike the other boards, the “CPU PCB” has no connections to the rest of the system other than through the ribbon cable.

Finally we have the “Formatter PCB”, which takes the data from the Z80 computer over the ribbon cable and writes it to the tape drive. This is the only board that has a connection to the tape drive itself, and contains two more Z8420AB6 parallel I/O controllers and a large array of Motorola SN54LS04J hex inverters.

The discovery of what is essentially a complete retrocomputer inside of this piece of equipment reminds me of the AH-64A Apache data entry panel we looked at previously. Though in this case I am surprised to see a lack of conformal coating, or even much in the way of vibratory protection. Obviously military hardware will be built to the highest possible standards, but considering this device was designed for life in a commercial airliner, the control electronics still seem quite pedestrian.

The Tape Drive is a Marvelous Piece of Engineering

As fascinating as the control section is, the tape drive is arguably the star of the show. Taking up nearly all of the available volume inside the D50761 it’s a massive piece of gear, especially to modern eyes. It’s also built quite differently than the control section, as here we see not only a much denser PCB layout, but the conformal coating and vibration considerations that were absent in the other boards.

On the surface it seems odd that these two components would be built so differently and still be packaged in the same device, but it could be that Penny & Giles designed the tape drive itself to higher specifications so it could be sold to the military. It would simply get paired with lower grade control electronics when it was sold for use in civilian aircraft.

In any event, the tape drive is a marvelous piece of engineering. Two boards, called the “Drive & Control PCB” and “Read/Write PCB” are mounted on hinges at the back of the drive, so you simply need to remove two screws at the front and fold them down for easy access. It’s a shame that electronics actually designed with testing and repair in mind are such a rarity today.

The rest of the case is taken up by the power supply, which features a fairly monstrous coil in addition to some beefy capacitors. There’s also an LM123K 5V 3A regulator which seems to be responsible for powering the control boards. Interestingly, there’s what appears to be a battery backup of some type on an elevated “shelf” over the primary power supply. One of the cells popped and unfortunately corroded things pretty badly, but judging by the silkscreen on the PCB it can provide 5V and 12V to the D50761, at least for a little while.

It doesn’t seem like these handful of cells could keep the power hungry tape drive running for any considerable length of time, but perhaps it’s just enough to allow the QAR to record the fact that the system has run out of power before shutting down. Alternately, it could be there just to help the D50761 coast through momentary power fluctuations. 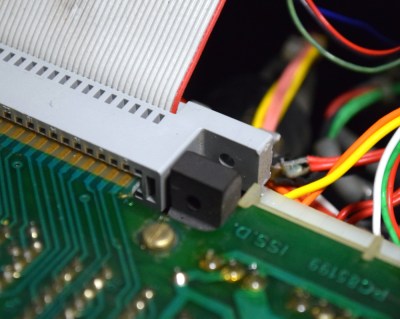 In general, I was surprised with how inconsistent the design and construction of the D50761 QAR is. It seems like a mishmash, with some components looking to be held to exacting standards and others bordering on an afterthought.

The tape drive itself is a marvel, but the power supply behind it looks like ancient technology in comparison. The layout of the control boards is simplistic to the point of appearing amateurish. Some connectors are secured against vibration with strong locking clips, and others are simply pushed on. The “battery backup” (for lack of a better term) especially looks like something that was tacked on in a later revision of the device, and the fact that there was no provision to protect the D50761 in the event of battery rupture seems exceptionally ill-thought-out.

Of particular note was the edge connector for the tape drive. Even though both the drive and the connector itself had holes which were clearly meant to run a fastener of some sort through, none was used. This edge connector is so lose that I could remove it with a single finger, and it baffles me why they wouldn’t have secured this connection even though it was clearly designed with this in mind.

In truth, I’ve been looking for a “real” Flight Data Recorder to do a teardown on, but those don’t seem to float by on eBay very often. At least not at a price point that is compatible with cracking it open in the name of knowledge, anyway. The search is still very much underway, but this D50761 QAR popped up and I thought it might serve as a stand-in for the interim.

As it turns out, this was an intriguing piece of hardware to look at in its own right. While not as robust as a true FDR, the D50761 gave us a fascinating look at what was essentially very high end consumer hardware for the era. It would be interesting to hear from any readers who might have experience with more modern QAR systems to compare their contemporary build quality. We’d also love to hear from anyone who might have actually used one of these recorders in its prime.

If you’ve got ideas for interesting pieces of hardware you’d like to see laid bare, don’t hesitate to drop us a line.