Oddly, there’s been a few recent outbreaks of measles. It struck me how when I was a kid, a few hundred kids getting measles wouldn’t have been news at all. However, even a handful makes the news now, since in 2000 the Center for Disease Control declared measles eradicated in the United States.

So how can an eradicated disease come back? How did we eradicate it to start with? The answers tell a pretty interesting tale of science applying to everyday life.

The first written account of measles appears to be from a 9th century Persian doctor. It would be 1757 before a Scottish physician showed it is caused by infection. By 1912, the United States started tracking the disease as an average of 6,000 people a year were dying from it in the US. It was particularly deadly to communities that had no exposure. In 1529, a measles outbreak killed two thirds of the population of Cuba. Later, it wiped out half the population of Honduras and also ravaged the Incans. In the 1800s, Measles wiped out major portions of Hawaii and Fiji.

Of course, that was before there was a vaccine. Before the 1963 introduction of the vaccine, virtually all children got measles — up to 4 million cases of it occurred each year in the US. Thanks to better medical care than was available in 1912, roughly 500 people a year would die, but nearly 50,000 a year would be hospitalized and around 1,000 would suffer from brain swelling as a side effect.

If you are below a certain age, you’ve probably never had measles or even seen a case of it. It is highly contagious and about 10 days after you are exposed, you’ll break out. High fever, cough, runny nose, and inflamed eyes are all symptoms. You’ll also likely get white spots in your mouth. But the trademark symptom is red spots on your face that spread to the rest of your body. The whole thing should be done in 10 days or less.

The virus is airborne and if you are not immune, you have a 90% chance of contracting it if someone in your living space has it. One infected person can infect 10-12 people on average. Compare that to the flu where the infection rate is 1-2 people. However, typically, if you have it once, you are immune from future exposure, although exposure elevates your risk of death from other causes for a few years.

In 1954 there was a measles outbreak in Boston. John Enders and Thomas Peebles collected blood from infected students and were able to isolate the virus in 11-year-old David Edmonston’s blood. By 1963 they had an effective vaccine. In 1968 the vaccine was improved by Maurice Hilleman and that vaccine is the same one you get today, usually with vaccines for mumps and rubella.

Enders was also instrumental in the creation of the polio vaccine. Even though polio got more press, it was less virulent and had fewer fatalities. Of course, polio often had more long-term effects on surviving patients. Still, Ender noted later in life that he found the work he did to end measles more significant than his Nobel-winning work on polio.

The actual vaccine works best with two doses. If you take only one, it is 93% effective. With two doses, your chance of avoiding infection is 97%. The vaccine actually contains live virus, although they’ve been “attenuated” to use the medical parlance. The live virus is placed in another host such as animal tissue or even a live animal. Many of the microbes will not be able to infect the host and die, but some will possess a mutation that allows it to thrive. This mutation will spread, but the mutated virus won’t be as adept at infecting a human host. That’s the virus that winds up in the vaccine. 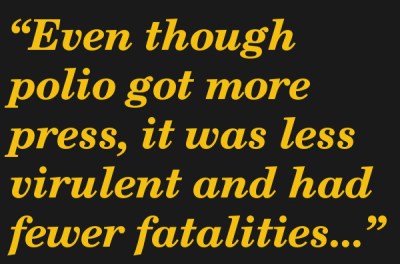 As successful as the measles vaccine is today, it didn’t start off that great. In 1963, there were two vaccines based on the isolated virus from Edmonston. One used an attenuated virus, but perhaps it wasn’t attenuated quite enough. Almost half of the children who received it would get a fever and some measles symptoms, so they started administering it with a measles immune globulin to further reduce its strength. This helped, but it was still less than ideal.

The other vaccine — based on the same virus — used dead organisms and was therefore not causing symptoms. However, it required three shots each a month apart and didn’t offer long-term protection against the disease. Worse still, a few years after inoculation, some children developed a measles-like illness.

Enders made the virus available to other researchers to encourage improvements in attenuation and this led to other vaccines based on other strains or improved attenuation of the original strain. By 1968, a safe and effective vaccine was available. While it is possible to have minor side effects, they are typically mild and short-lived.

People were optimistic. In 1967 it was thought that the disease would be eradicated from the United States in a matter of months. This didn’t pan out. You can’t get everyone to take a vaccine and sometimes the vaccine simply doesn’t work.

In 1978, the CDC set a goal to eliminate measles in the US by 1982. While they didn’t make that goal, they did reduce cases significantly. In 1989, a new outbreak led to the recommendation for a second dose of vaccine. By 2000, there had been 12 months with no continuous disease transmission, so the war was declared over. However, since there are unvaccinated people and some of them travel overseas, occasional outbreaks do occur. 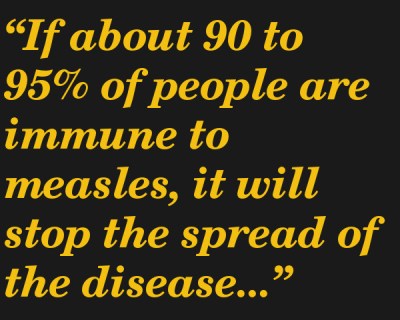 Realistically, not everyone will get vaccinated. Some people can’t for medical reasons or are too young. Other people simply won’t for reasons like religious belief, fear, or just laziness. However, if enough of your neighbors are vaccinated or otherwise immune, it confers what is known as herd immunity. If about 90 to 95% of people are immune to measles, it will stop the spread of the disease and your chance of getting it will be near zero if you are not directly exposed to it. Less virulent diseases like polio require even fewer members of the herd to be immune. However, diseases you can contract from something other than another person (for example, tetanus) aren’t subject to the herd immunity rule.

Two recent US outbreaks had 225 and 50 victims — a far cry from the early days. In both cases, people without immunization went to a foreign country and returned home to infect other non-immunized people.

There are still 20 million cases a year of this disease, mostly in the developing world. If you think it is just a harmless childhood rite of passage, think again. In 2014, there were 73,000 deaths — better than the 2.6 million who died in 1980. However, a decrease in immunization rates has seen numbers trending up in recent years.

It is interesting, though, that a disease that used to strike millions now makes the news when a few hundred people get it. There has been controversy, of course, around side effects and also surrounding ethical concerns about some vaccines (including measles) have been tested. That’s a bigger topic. But the number of lives saved by the measles vaccine over the last 50 some odd years is staggering — perhaps as high as 100 million.

153 thoughts on “Better Living Through Science: Why Your Kids Probably Aren’t Getting Measles”