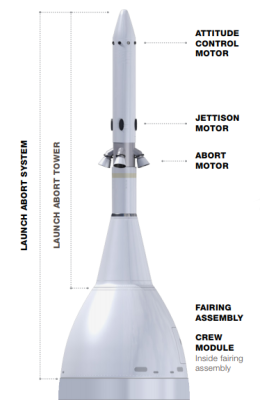 The similarity to what’s come before is certainly strongest with NASA’s own Orion capsule, which uses a LES tower that at first glance looks like it might be a modified spare leftover from the Apollo missions. In reality, the design has seen considerable improvements since the 1972 conclusion of the Apollo program.

Just like the Apollo and Mercury LES towers, the Orion uses a solid-fuel rocket motor in a tractor configuration, which is to say that it pulls the capsule away from the rocket rather than pushing it. Since the rocket motor is in front, angled nozzles are used to divert the exhaust around the capsule itself. As you might expect, there are some cosine losses involved with this off-axis thrust; but considering the Orion LES motor has more total thrust than the Redstone rockets that carried the first Mercury capsules into space, it still has more than enough power to do the job.

Of course, if the LES tower simply accelerated the capsule in a straight line, eventually the rocket would catch back up to it. So not only does it have to pull the Orion capsule forward, it also has to move it sideways to get it out of the path of the oncoming rocket (or potentially, cloud of debris).

The Apollo LES tower actually used a set of canards up at the tip to help leverage the capsule over, but on Orion, it’s all done with vectored thrust. After accelerating along the original direction of travel for several seconds under the power of the abort motor, attitude control thrusters fire and flip the capsule over. This tumble maneuver slows Orion down, at which point the LES tower is jettisoned. The now free-flying Orion capsule would then use its parachutes to land like it would at the end of a nominal flight.

On July 2nd, NASA performed a full-scale test of the Orion LES from Launch Pad 46 at Cape Canaveral Air Force Station. While it didn’t carry a real Orion capsule, or crew, the abort procedure was performed exactly as it would be in an operational mission. The successful deployment of the LES is seen as an important step towards returning astronauts to the Moon.

SpaceX Goes all Out

For Crew Dragon, SpaceX has decided against using the classic LES tower. Rather than putting the abort thrusters out on an arm in front of the capsule, they’ve been built right into the hull of the spacecraft. Instead of solid-fuel, the SuperDraco engines used by the abort system are powered by hypergolic liquid propellants, namely hydrazine and nitrogen tetroxide. Since the two chemicals ignite on contact, the SuperDraco has comparable reliability and response time to the solid rockets used in “classic” abort systems, but with the advantage that they can be throttled down and shut off at will. This means the Crew Dragon doesn’t need seperate thrusters to pitch itself over, it can maneuver using differential thrust between the engines.

Some might argue that it’s an unnecessarily complex approach to the problem, but to be fair, SpaceX had lofty goals for this system when it was designed. Originally, the Crew Dragon was to forgo parachutes and use the SuperDracos to make a powered landing at the end of a nominal mission. This would have made landings far more comfortable for the crew (and sensitive scientific cargo), but NASA decided it was an unnecessary risk compared to splashing down in the ocean so the idea was abandoned. Internal abort thrusters were also seen as a boon for reusability, but since SpaceX doesn’t currently plan on using reused Dragons for crew missions, it seems a moot point.

SpaceX performed a successful test of their LES using a mockup capsule on May 6th, 2015. As with the Orion, this was a “Pad Abort” test, where the LES is engaged while the capsule is stationary. A second test, expected to be conducted before the end of the year, will activate the LES while the vehicle is in flight.

For the CST-100 Starliner, Boeing has taken something of a hybrid approach. They’ve also decided to skip the LES tower, but rather than integrating the abort engines into the capsule itself, they’re part of the service module. This makes reuse impossible since the service module burns up in the atmosphere during reentry, but it does avoid significant integration challenges. In light of the fact that a Crew Dragon was completely obliterated during a SuperDraco test in April, the argument could even be made that it’s a safer approach as well.

The LES on the CST-100 will fire different sets of thrusters depending on when the abort is triggered during the flight. In an early abort, four modified Rocketdyne RS-88 engines will be used to separate the capsule from the rocket. At higher altitudes, the separation can be performed with the craft’s smaller maneuvering thrusters. This is similar to the high-altitude abort profile dramatically demonstrated by the Soyuz MS-10 last year. All of the thrusters utilize the same same hypergolic liquid propellants stored in central tankage; during a nominal flight, orbital maneuvers will be performed with the fuel that would otherwise have been consumed in an abort.

To date Boeing has only performed a static test of the CST-100’s LES, but a Pad Abort test is tentatively scheduled for sometime this summer.

Always at the Ready

While they differ considerably in their execution, the LES for NASA’s Orion, SpaceX’s Crew Dragon, and Boeing’s CST-100 essentially all operate on the same principle of using small rocket engines to get the capsule “up and away” from the rest of the vehicle. Despite the irony of using a rocket to escape another rocket, and more than half a century of technological advancement, it’s still the best way we know of to get the crew away from a potentially deadly situation as quickly as possible.

That said, the most obvious trait that all of these systems share is the fact that every person involved in their design, construction, and testing hopes they will never have to be used in an actual spaceflight. But on the off-chance they ever feel the sharp kick of the Launch Escape System roaring to life, the astronauts aboard these craft can rest assured that an incredible amount of engineering time and effort has been put into giving them the best possible chance of making it home.