It’s time once again for another installment in “Milspec Teardown”, where we get to see what Uncle Sam spends all those defense dollars on. Battle hardened pieces of kit are always a fascinating look at what can be accomplished if money is truly no object. When engineers are given a list of requirements and effectively a blank check, you know the results are going to be worth taking a closer look. 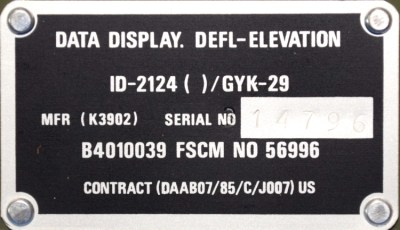 Today, we have quite a treat indeed. Not only is this ID-2124 Howitzer Deflection-Elevation Data Display unit relatively modern (this particular specimen appears to have been pulled from service in June of 1989), but unlike other military devices we’ve looked at in the past, there’s actually a fair bit of information about it available to us lowly civilians. In a first for this ongoing series of themed teardowns, we’ll be able to compare the genuine article with the extensive documentation afforded by the ever fastidious United States Armed Forces.

For example, rather than speculate wildly as to the purpose of said device, we can read the description directly from Field Manual 6-50 “TACTICS, TECHNIQUES, AND PROCEDURES FOR THE FIELD ARTILLERY CANNON BATTERY”:

The gun assembly provides instant identification of required deflection to the gunner or elevation to the assistant gunner. The display window shows quadrant elevation or deflection information. The tenths digit shows on the QE display only when the special instruction of GUNNER’S QUADRANT is received.

From this description we can surmise that the ID-2124 is used to display critical data to be used during the aiming and firing of the weapon. Further, the small size of the device and the use of binding posts seem to indicate that it would be used remotely or temporarily. Perhaps so the crew can put some distance between themselves and the artillery piece they’re controlling. 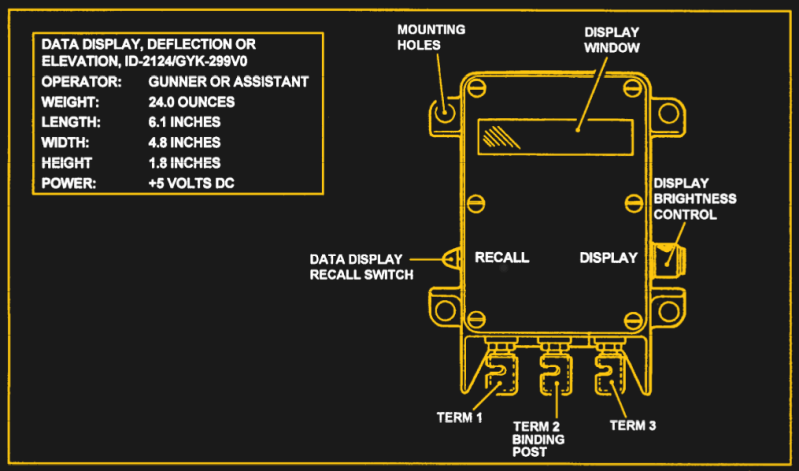 Now that we have an idea of what the ID-2124 is and how it would be used, let’s take a closer look at what’s going on inside that olive drab aluminum enclosure.

All of the military hardware we’ve looked at over the course of this series has been built to meet the most stringent quality and reliability standards. Heavyweight enclosures and aerospace rated components are a given. But even still, the ID-2124 is on another level. Designed for external use in what’s likely to be an inhospitable environment, the enclosure is easily the most robust of any piece of equipment that I’ve ever disassembled.

So robust, in fact, that it actually took me quite some time to open it. After removing the six screws around the perimeter, I found the front panel remained firmly in place. As it turns out, it was also held in place with a glued gasket. This made the device impermeable to the elements, and it also did a fantastic job of keeping me out. With no way to get leverage on the recessed panel, I wasn’t sure how to proceed. I didn’t want to use heat or do anything else that might mar the surface, so this device actually sat on a shelf for awhile until I came up with a solution.

In the end, I tapped the holes in the front panel so that it would grip on screws that are slightly larger than the original ones. Threaded into the 8 mm thick panel, these screws gave me something to put some leverage on. With considerable force, I eventually broke the seal that was holding the two pieces together. While I don’t like to make any permanent alterations to the military hardware out of respect for the history involved, once the original screws are back in place you can’t tell the holes have been enlarged.

When I finally cracked the seal on the ID-2124 case and lifted the cover, I’ll admit an audible gasp might have snuck out. The board is absolutely gorgeous, and between the conformal coating and the fact it’s spent the last 30-odd years in a hermetically sealed box, it’s in pristine condition. It was literally like opening up an electronics time capsule. Although from when might be debatable; while the date codes on various components point to it being manufactured around 1987, the overall design looks closer to something from late 1970s. 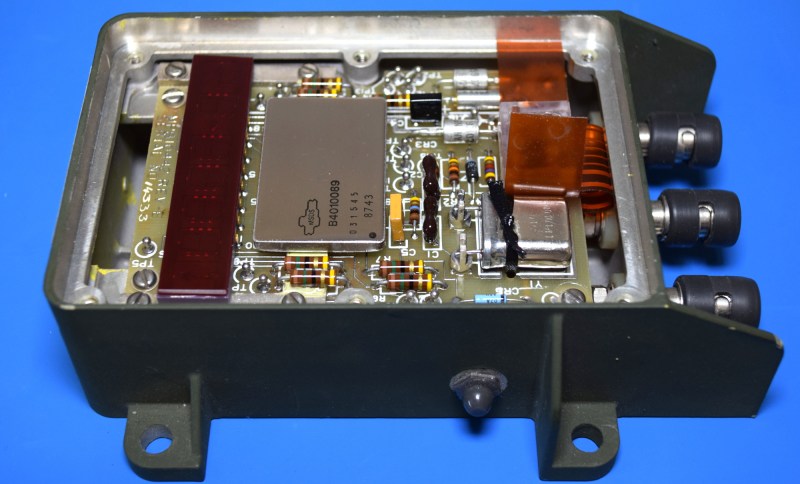 I was somewhat surprised to find that the single PCB was all that’s inside the ID-2124, the majority of the enclosure is empty space. It’s possible that an earlier version of this device required more electronics to operate, while this later version managed to pack everything into one board. Though I couldn’t find any obvious evidence of that, such as unused mounting holes in the case.

With the PCB removed, we can see the only components below it are the controls and wiring lugs, which are connected via a flexible flat cable terminated with a delightfully chunky plug. There’s also a handwritten notation that lists the Federal Supply Code for Manufacturer (FSCM), the part number for the case itself, and the current design revision.

Electronics from Another Age

The PCB of the ID-2124 is unquestionably beautiful, but also somewhat alien to the modern eye. It’s not just the nearly translucent substrate, or the unapologetic use of the dreaded square trace. Even some of the components are strange. We can identify the resistors and crystal well enough, they just look like larger versions of what we’re used to. But there’s some genuine oddities here as well. 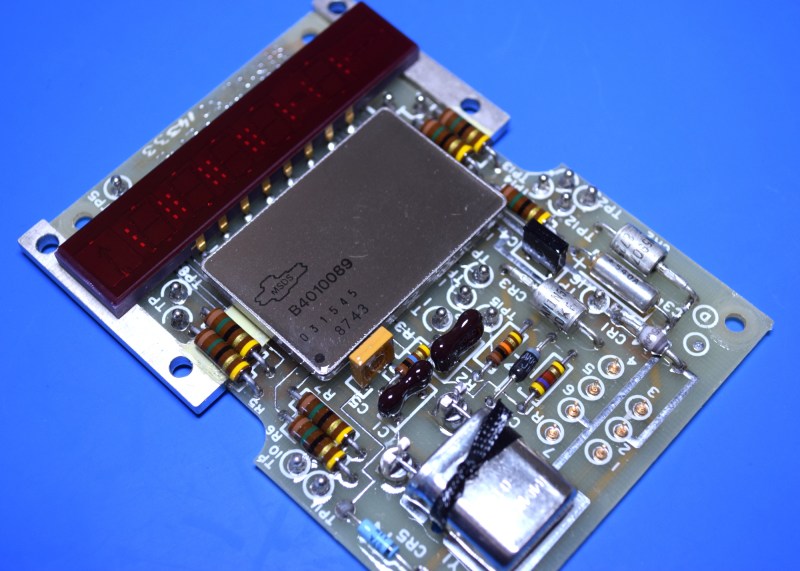 Chief among them is, unquestionably, the huge device in the middle labeled B4010089. It’s clearly a microcontroller of some type (to use the modern parlance), but I’ve been unable to find any information on it. In the diagrams I’ve found, the device is simply referred to as “LOGIC AND DISPLAY”, which seems to indicate there’s a display driver living inside that sealed metal package as well. Also note that it and the two resistors on either side have been attached to the metal bar with what appears to be a thermally conductive material. It’s probably safe to assume that this component gets rather warm during operation.

The display itself is another relic, though at least this time we can get a bit more information on it. The technical manual refers to this as the “OPTO DISPLAY #B4010133”, and a bit of searching online uncovers Plessey as the manufacturer. Given the somewhat unusual nature of the display, it would seem the 16 pin device was custom made for this application. Or at the very least, for similar military hardware.

Flipping the board over, it’s interesting to note how few pins appear to be required to drive the display. Sniffing the data passing between it and the controller chip with a logic analyzer could yield some useful information, but the aforementioned conformal coating on the board does make that sort of thing difficult. As it is, I couldn’t even get my multimeter probes through the coating to try and follow the continuity of traces. 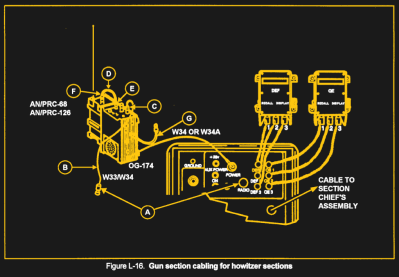 As mentioned previously, there’s actually a decent amount of information about the ID-2124 to be found in unclassified documents floating around online. Field Manual 6-50 mentions it briefly in regards to setting up the artillery piece for use, and even provides a sketch of how two of these devices connect up to the weapon’s primary “Gun Display Unit”, or GDU.

It was nice to have some context for how the ID-2124 would have been used, but unfortunately it didn’t really delve into what kind of data the unit is actually expecting to receive. Though admittedly, given the intended audience for the document, it would have been pretty surprising if it actually had that level of technical detail.

For our purposes, far more interesting information is to be found in Technical Manual 11-7440-283-40P, “GENERAL SUPPORT MAINTENANCE REPAIR PARTS AND SPECIAL TOOLS LIST FOR COMPUTER SYSTEM, GUN DIRECTION AN/GYK-29(V)”. In this document, we get a much closer look at the ID-2124, including detailed diagrams of the PCB and its components.

Unfortunately, even this document doesn’t provide any circuit schematics, and still no protocol information. Clearly the ID-2124 is a digital device, and the fact it’s connected to the GDU through just three wires helps narrow things down a bit in terms of communication methods. But without a Howitzer GDU to sniff the data from, there’s no way to know what kind of signals it’s actually waiting for. 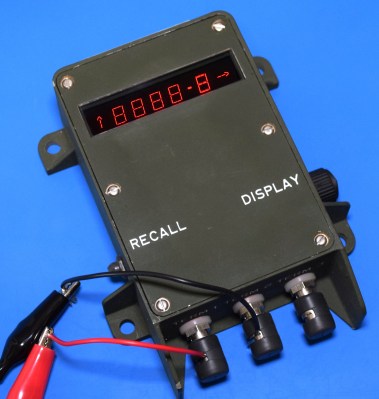 While the ID-2124 Howitzer Deflection-Elevation Data Display is certainly built tough, I’ll admit to being surprised by how straightforward the internals really were. Especially when compared to the monstrous complexity of something like the AH-64A Apache Data Entry Keyboard, which packed an Intel 8085 computer and regulated power supply into a box not much larger than this. Here there’s just a display, a control module, and a handful of passive components.

On the other hand, that might actually bode well for potential reuse of this device. Generally, the military hardware we’ve looked at has had no practical application outside of being an interesting conversation piece. But in this case, reusing the ID-2124 as a general purpose numerical display is just a matter of figuring out how to talk to it. The answer may yet be found in some arcane military technical manual, or it might even be locked away in the mind of one of our illustrious readers .