The Egg Minder is held together with seven unnecessarily large screws, each hidden behind a rubber plug that blends in with the case so well that at first I thought they were potted in with some kind of epoxy. Curiously one of the screws had a T15 head, which I would normally attribute to some attempt at “security”, but it seems odd that Quirky would be worried about anyone taking a peek inside their electronic egg carton. There’s also a thick rubber gasket keeping the two halves of the plastic casing sealed, and a boot around the power switch. So far, that Quirky attention to detail is in full effect.

With the enclosure opened, we can see the bottom half is empty except for the battery compartment. I was actually a bit surprised they didn’t add some chunks of metal in there to give the device a bit more heft. The thing is responsible for holding your eggs after all, and keeping it more firmly planted to the shelf in the fridge seems like it would be worth the few cents to throw some ballast in there.

The top half was also a surprise: it’s not every day that you see the back of a single-sided PCB like this. Questions such as “Why?” and “How?” immediately came to mind.

Flipping the PCB over, we can immediately see how they pulled it off. The board uses an incredible number of zero value resistors to “jump” over traces, allowing the entire circuit to be contained on the same side of the board. Rather than using a via to bring a trace to the other side whenever things got a little cramped, one of these resistors was used to physically lift the trace over its peers.

So now we know how they managed to contain such a complex SMD design on just one side of the board, but we still don’t know why. This is the part where we get to speculate a bit. The board has what is presumably a waterproof coating, but rather than being sprayed uniformly over the entire surface, it’s been carefully applied so as not to cover up any of the (numerous) surface mount LEDs.

If we imagine that a worker had to manually brush this coating onto the board, it makes sense that they’d want to keep everything on the same surface. Not only would it be faster for the worker, but it would allow the boards to be placed on their backs to dry rather than having to hang them and risk the coating running where it didn’t belong. But again, that’s just speculation. If somebody has a better theory, I’d love to hear it.

You may have noticed that, up until this point, I haven’t addressed how the Egg Minder actually works. That’s because, frankly, it doesn’t. Granted that might sound a little harsh, but the fact of the matter is that this device doesn’t actually tell you how old an egg is.

There’s no high-tech spectroscopy going on that can peer through the shell or anything like that. It simply keeps track of how many eggs are currently sitting in the fourteen openings on the top; it’s up to the user to accurately enter the date they were purchased into the smartphone application.

Accordingly, some of the reviews I saw online assumed that the Egg Minder was simply using pressure sensors to detect how many eggs were onboard. Which is certainly a logical enough conclusion. An array of microswitches that engage under the weight of the eggs is probably the most straightforward way to approach this problem, and is certainly how I would have tackled it if asked to come up with my own homebrew version.

But that’s not how Quirky did it. Their solution uses fourteen pairs of infrared emitters and sensors, complete with optics at the bottom of each egg cup, to detect the reflection off of the egg’s shell. At first glance it seems like overkill, but in all fairness, this method does allow detecting the eggs regardless of their weight. It could be that physical detection was found to be unreliable with eggs of various sizes, where as this optical method should work no matter how small the egg is.

Of course, there’s more to the Egg Minder than a bunch of IR sensors. At the heart of the device is an Electric Imp module, the same as we previously saw in the Refuel. Clearly Quirky was a fan of these modules, and at this point, I’m going to go out on a limb and say that all of their Internet-connected devices from this era are probably packing this same board. In a pre-ESP8266 world, the Electric Imp was a compelling way to jump on the IoT bandwagon without having to reinvent the wheel.

I couldn’t end this teardown without pointing out what’s easily my favorite aspect of the Egg Minder, and a perfect example of the sort of fanatical attention to detail that Quirky engineers had. Along the side of the device there’s a light sensor, which as far as I can tell, is there to determine when the plastic lid has been closed over the eggs. Though it may also be used to determine when the lights are off in the refrigerator, as presumably the Electric Imp will limit its attempts to communicate with the outside world once the refrigerator door is closed and it’s essentially locked inside of a Faraday cage.

In any event, the designers were apparently concerned that light emanating from inside the Egg Minder could interfere with the operation of this sensor. Considering each egg has not only an IR emitter under it, but LEDs indicate its relative age, it wasn’t an unwarranted concern. To prevent this they painted the area behind the sensor black and covered it with a piece of fabric, just to be extra sure that no light could bounce around and compromise their electronic egg counting device. Oh Quirky, we don’t deserve you. 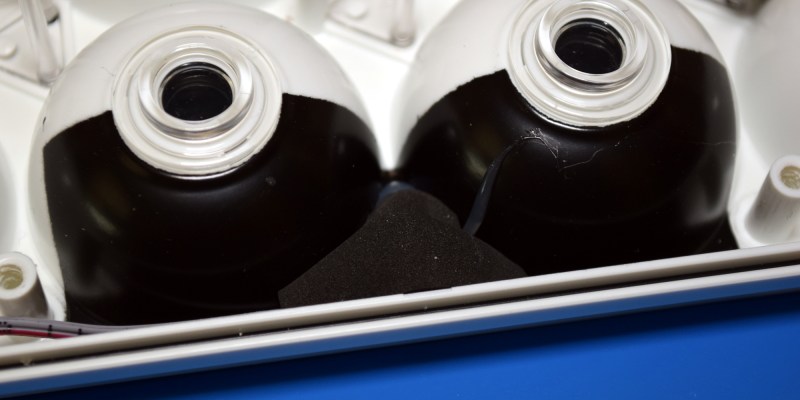 In doing some research for this teardown, I found that this actually isn’t the first time the Quirky Egg Minder has graced the pages of Hackaday. Back in 2013, we wrote up a post about the then in-development Egg Minder, and asked readers to theorize how it might work and how they could build their own version.

With the final production hardware laid bare before us, it’s pretty interesting to go back and read those comments six years later. A number of folks guessed the device would be using an Electric Imp, and one commenter even correctly predicted it would come packed with lithium batteries due to the low temperatures it would need to operate in. A Quirky engineer even chimed in to say he was excited to see a project he was working on get picked up by Hackaday. Here’s hoping you’re still reading, Josh. You did us proud.