Most of us currently have to deal with wearing face masks in our daily life. An experience that is not entirely pleasurable as it is more difficult to breathe under the mask and can become hot after a while. In addition, you have to take off the mask whenever you want to eat or drink. [DesignMaker] has attempted to solve these problems by creating a mask with an opening that shuts automatically when other people are nearby. 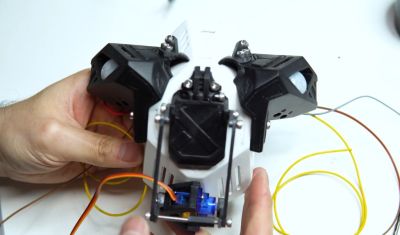 While homemade masks are usually made from fabric [DesignMaker]’s version is much more to a hacker’s taste and includes 3D-printed parts, an Arduino Nano, PIR sensors, an SG90 servo, and some Neopixels. [DesignMaker]’s background in industrial design certainly helped him when modeling the mask as it looks just plain awesome.

His goal was to use PIR sensors to detect when a person is moving nearby. The servo then shuts an opening located at the mouth part of the mask. However, he soon found out that the mask often shuts when nobody is around. The reason is that the sensor can be triggered by ambient IR radiation when it is moving by itself. In the end [DesignMaker] decided that having the mask shut when you are moving is not a bug, it’s a feature.

Of course, the mask is just a prop and should not be used as protective equipment. As shown in the video below, also the false triggering of the PIR sensors can be annoying at times. But [DesignMaker] is already thinking of improvements like having the mask properly sealed with fabric or replacing the PIR sensors by a camera with face detection.

If you want to learn how to sew a proper fabric face mask have a look here. It’s a lot less ridiculous, but a lot more effective. You can’t have everything.