One of the biggest time sinks when building this type of adobe house is that the construction requires long bags to be filled with earth, traditionally done with two or more people in order to keep the bag open and allow it to fill properly. The CalEarth Dream Team tackled this issue by creating an “earth funnel” which allows someone to hold it open with one hand while shoveling earth into the bag with the other. A rubber band around the bag allows the long bag to unravel itself as its filled, which saves the labor of one person. The funnel is made from laser cut material — although it could be hand cut with a simple pattern — and assembled using only a rivet gun. 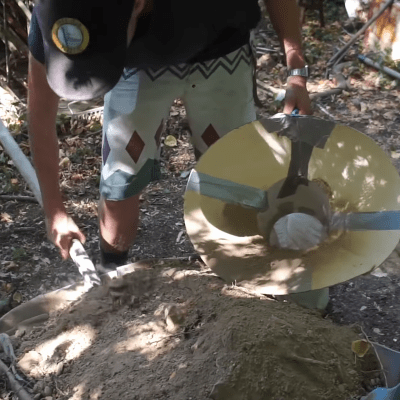 While the design of the funnel works and shows tremendous promise for this type of building method, there are some design improvements to work out in the future. Figuring out a more ideal size is at the top of the list, as some users found it to be slightly too large, along with adding more handles to the funnel itself. Another problem is that the rubber band has a tendency to slide off, so that system needs to be fine tuned as well. Finally, the team hopes to ship these out with detailed instructions on their use so that their future users know both how to assemble the funnel and how to use it properly for maximum effect.

While the funnel saves a tremendous amount of time, the other major source of lost labor is making sure that the walls have the correct shape. The SuperAdobe building method involves taking the long bags of earth and laying them on top of each other, building up to create the walls. Once the walls are in place, narrower and narrower rings are laid in order to create a domed roof. In between each ring a strip of barbed wire is laid which prevents the bags from slipping. However, the rings need to be precisely positioned to maintain the integrity of the structure, so typically a compass (the kind used for transferring measurements, not the kind for path finding) is used made out of two poles. The traditional tool is cumbersome to use, however, so the CalEarth team designed an attachment which solves a number of these problems. 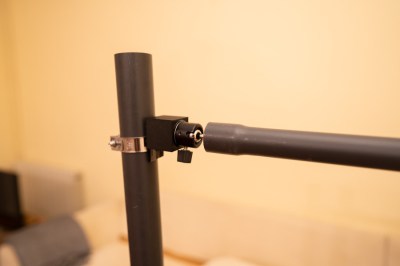 The new compass, called a “pipe sail”, has more degrees of freedom than otherwise available, allowing the measuring pole to rotate around the base pole more easily and also fold flat when not in use, which allows much more freedom of movement inside the structure during construction. It is also much easier to raise and lower as the bags are laid down, saving the team time when measuring the new walls. Finally, it has some dust resistance as well, allowing it to last longer with less maintenance.

Of course, the pipe compass still involves a lot of tedious and non-automated work. This is where the high-tech compass comes in. The team built a LIDAR-based compass in addition to the pipe compass to similarly measure the distance from the center of the structure to the wall or dome under construction. When the earth tube is in the correct position, the compass measures the distance from the center of the structure and shines a green laser on it when it is placed at the correct distance. This allows the builders to get an automated, visual cue that they have placed them properly without using a physical tool. The builders can use their hand to get an indication of where the bag should be placed before actually laying it down, and then get it as precise as possible once it has been laid down. 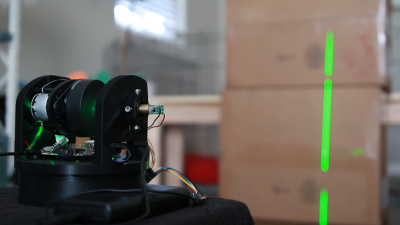 During the two-month challenge window, the team only had enough time to get a proof-of-concept for the LIDAR-based compass to work. Some planned improvements to it relate to making it tolerate the environment better by improving the housing, rotating platform, and mounts. Some other improvements focus on the reliability and performance of the device itself, and the team plans to improve laser stability and accuracy and their algorithm’s accuracy in future versions as well. Of course, all of the designs and code for everything has been made open source and can be found at the project’s page.

The Future of SuperAdobe

As housing costs rise and city centers grow this important work gives a larger number of people more access to housing that might not otherwise have it. Using the ground beneath our feet, wherever we happen to be, is a viable solution for sustainable housing that suits the climate and environment that home happens to be in, without needing to truck as many supplies from distant areas. The icing on the cake is that the future home dwellers can even have a hand in the building of their own homes, and they might just last longer than any modern stick frame house to boot.

25 thoughts on “The Ground Beneath Your Feet: SuperAdobe Construction”