Until the nearly 1900s, the best available option for partial hearing loss was the ear trumpet, which takes the sound over a larger area and condenses it into a smaller area at the ear canal. The invention of the microphone enabled electronic hearing devices, with Miller Reese Hutchison inventing the Akouphone, a tabletop unit. By 1902 it had become a battery-powered smaller device called the Acousticon, but it was still bulky and the batteries didn’t last long and it didn’t have good volume control or frequency filtering; basically it was pretty much every V1 product, but it was still revolutionary.

Since it was impossible to jam vacuum tubes into people’s ears safely, it took a long time before hearing aids got significantly better, but suffice it to say that as technology improved, so did hearing aids. Advances in plastics, microelectronics, sensing, filtering, batteries, manufacturing, and all of the other things that have improved every other aspect of modern life also contributed to better hearing aids.

Now there are a variety of types, but they exist in three general categories: behind-the-ear (BTE), in-the-ear (ITE), and in-the-canal (ITC or completely-in-the-canal CTC). Their names are descriptive enough, and their advantages are easily imagined. Behind-the-ear allows for larger batteries and more complex electronics, at the expense of bulk. In-the-ear is smaller but still visible and is a compromise. In-the-canal are the smallest yet, but aren’t easy to adjust or remove, and can’t have some of the nicer features or amplify very much.

Hearing aids have come a long way in 120 years. Current aids can have Bluetooth connectivity for interfacing directly with smartphones. There is also a feature called telecoil, which uses a magnetic field created by a loop in the listening area. Many meeting places, like churches and libraries, have this technology installed in meeting rooms to allow the hearing impaired to pick up and amplify the sound more clearly. Aids will have adjustable volumes and frequency ranges (to only amplify the ranges where the patient has loss, or to shift frequencies from ones where there is loss to ones where there is not), dynamic volume adjustment, noise reduction, profiles for different environments. The R&D and engineering involved in these advancements is certainly part of the high cost, but in some cases these features can be undesirable, such as when it filters out sounds you want to hear, like music. There is definitely a sweet spot between a high cost product that amplifies exactly what you want exactly how you want it but with a complicated interface for navigating all of those settings, and a cheap run-of-the-mill amplifier that barely gets the job done. The only problem is it’s a different spot for everyone.

Not having any hearing aids around, I resorted to my favorite FCC trick for teardowns, and discovered the internal photos of a few.

Behind-the-ear units are rigid-flex PCBs folded into a variety of contortions to place all the components into the curved enclosure. Behold the Aurora BTE: 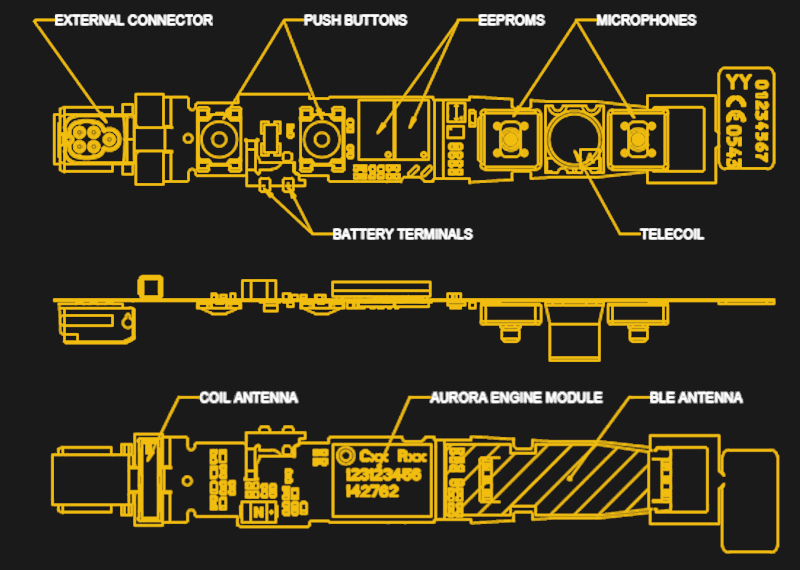 The completely-in-canal Aurora CIC is a marvel of engineering and a challenge to photograph. Fortunately their user guide has a helpful diagram to assist.

Designing a new one

If one were to assume that all the current manufacturers of hearing aids are misguided in their goals of making smaller and more expensive devices, and one wanted to make something for the masses of underinsured and uninsured who have mild to severe hearing loss, how would one go about it? First, let’s assume that CIC or even ITC is unrealistic, as it requires far too many customized components, including a molded shell for the user’s ears, and difficult assembly. BTE is far more accessible, as is a headphone or earbud solution.

What kind of off-the-shelf parts could be used to reduce NRE and scaling costs? A rechargeable battery would be nice, but more expensive, lower energy density, and more difficult to service than disposable cells or alkalines. How about the circuit: a pure analog solution, or a digital solution that incorporates DSP? Throw in Bluetooth or not? What knobs should it have? A digital solution with some pre-designed profiles and a knob for volume and a knob to select the profile could accomplish the vast majority of the requirements.

And this is where we come to the difference between a hearing aid and a Personal Sound Amplification Product (PSAP). There are lots of PSAPs available for a wide range of prices, with many offering all of the same features at a fraction of the cost of a hearing aid, but an equally large number of warnings about them and their inappropriateness as hearing aids. The primary concern is that they will do more harm than help, as improper amplification of frequencies can contribute to further damage, and using one can delay being seen by a professional who may be able to diagnose and treat the underlying cause before it’s too late.

Proper procedure aside, when presented with a choice between a PSAP and nothing, there are still many who will choose the PSAP, and some who have done research in it as an acceptable solution. We shared one such device in 2016, and as recently as September another group created LoCHAid with a BOM of <$1 (primarily a MAX98306 3.7W Class D amplifier). 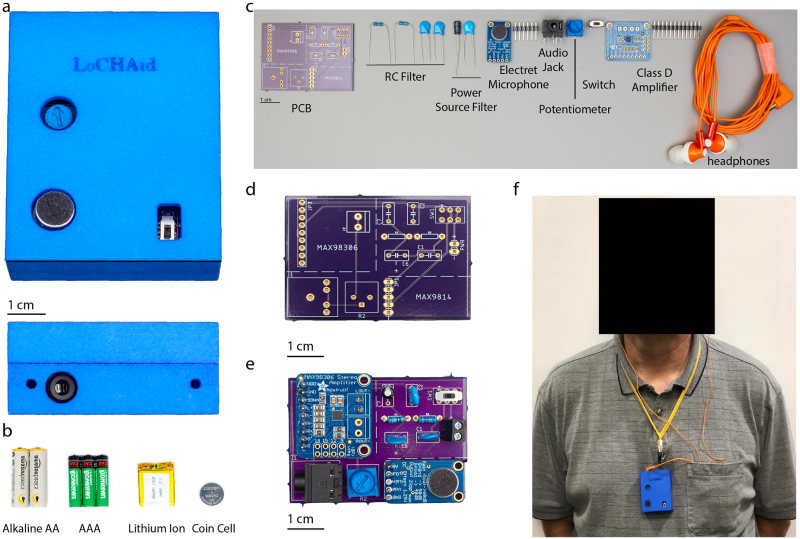 Being able to slap the words “medical device” on a product automatically adds zeroes to the price, but the privilege comes with a lot of effort and cost on the part of the manufacturers as well. The regulatory requirements are rigorous. Because it is worn so close to the body for extended periods, it must pass radiation emissions tests, SAR evaluation, biocompatibility tests, and other safety tests. Acidic ear wax can have effects on the enclosure as well, and the device must not cause harm to the users. Testing and documentation and regulatory filings can occupy years of time and hundreds of thousands of dollars, and vary from country to country, so it is an effort not lightly undertaken. This is why PSAPs exist.

Getting involved in helping people with their medical problems, especially those who are underprivileged, is a noble endeavor. Technology has improved to the point where an open source design may even be accessible. Maybe there is a middle ground somewhere for a low-cost design with the minimum features that is safe, with an open source development environment and BSP that would allow developers to improve the audio features. There may be room in the market for budget hearing aids for low and middle-income countries. However, where health is concerned, we should be extremely careful not to create something that would cause more harm than good.

152 thoughts on “It Costs WHAT?! A Sounding Into Hearing Aids”