Let there Be Light

Under the frosted plastic dome on the front of the zapper bulb is…well, what you’d expect to find inside of a cheap LED bulb. A few years ago this kind of thing might be novel, but we’ve seen it all before. 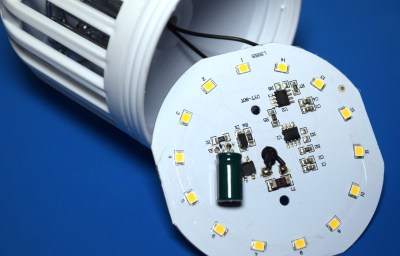 With just fourteen run-of-the-mill diodes, the light produced from this bulb isn’t particularly impressive. According to the manual it’s putting out 600 lumens, which would put it just slightly north of what you’d expect from an old school 40 W incandescent bulb. Being a relatively low-power array there’s no external heatsink on the bulb, the aluminum backing of the PCB seems enough to keep things cool.

The limited light output is made worse by the fact that all the diodes point forward, making this more of a bad spotlight than anything. Arguably that might be desirable outside, especially if this was placed in a high light socket and you wanted to throw a beam down on a porch or deck. But in that case it would have been nice if they actually indicated that by giving the bulb a more distinct spotlight shape.

Beyond the LEDs, the only components of any note are the dual SM2212EA driver ICs. I couldn’t find an English datasheet for these, but a rough online translation of the PDF provided the highlights: they run on 90 to 240 VAC, offer a two-stage brightness control, and have built in thermal shutdown. But the fact that there are two of them seemed odd, and on closer inspection, the way they were connected didn’t seem to make any sense.

The answer comes from the datasheet, which explains on one of the final pages that if the power requirements are so high that a single SM2212EA goes into thermal overload, you can simply duplicate the single chip application and tie their outputs together to run them in parallel. Each chip has two output pins because one is the full brightness pin that comes on first, and the second is the reduced current pin that dims the LEDs after the power switch has been flicked on and off.

That makes sense, except for one problem: the LEDs on this product don’t actually dim. When you flick the switch on the first time the light and zapper functions are both on, and when you flip it again, the LEDs go off completely while the zapper stays on. So what’s going on?

While the datasheet isn’t very clear, it seems that the resistor connected to pin 4 of the SM2212EA is used to set the amount of current the secondary dimming pin will pass. But a close look at the PCB shows that this resistor is missing for both chips (pads R3 and R6 on the silkscreen, R2 and R4 on diagram), so the dimming function is essentially disabled. If you were so inclined you should be able to drop a pair of 200 ohm resistors across those pads to turn it back on, but you’d lose the ability to use the zapper without the light on.

Below the LED PCB and on the other side of a little plastic bulkhead, we find the electrified elements that do the actual zapping of bugs. They appear preposterously overbuilt for this application, which makes me think more thought was given to the aesthetics of the shiny chrome grid than its bug-busting properties. It seems like a tighter grid of smaller diameter wires would have been more effective, but wouldn’t have looked nearly as nice sitting on the shelf or during the late-night TV infomercial.

On the plus side they’re attached to the high-voltage PCB with nothing more exotic than some M3 screws, so they can be easily removed for potential modification or reuse. At the center of the grid are four UV LEDs which serve as the “bait” to bring the bugs in. Now as we’ve learned from the COVID pandemic, not all UV LEDs are created equal, and these are probably only good for attracting bugs. (Oh wait.) 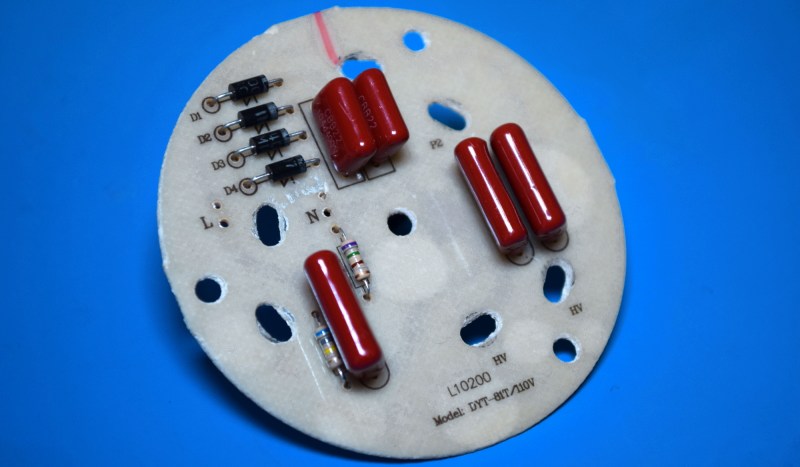 Taking a look at the back of the HV PCB, we can see just how simple of an arrangement we’re dealing with. There’s no transformer involved, just a basic voltage multiplier circuit using four pairs of diodes and capacitors. That gives a maximum potential of a little under 500 VDC when running at 120 VAC here in the US, which as far as I can tell, is exceptionally poor for a bug zapper. A quick perusal of Amazon shows even the relatively cheap models are advertising grid voltages of 3 to 4 kV.

For the record, I didn’t lose count. The fifth capacitor off to the left side with the pair of diodes is being used to provide the power for the UV LEDs on the other side of the board, and doesn’t appear to be connected to the HV side of things. 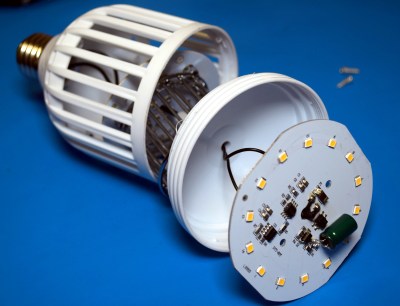 So on the top we have a pretty ho-hum LED bulb, and on the bottom, a photogenic but ultimately anemic bug zapper. Through a pair of legitimately hacked dimmer ICs, the user has the ability to turn off the LEDs, but the high voltage zapper is live whenever the power is supplied. Though to be fair, it’s hard to imagine a scenario in which somebody would buy one of these things but not want to use the zapper function.

I can’t say that it’s poorly built, in fact, I was somewhat impressed by how competently everything seemed to be put together. But functionally, I’d be hesitant to pay the full $20 USD MRSP. If you’ve got a bug problem, you’d be better served with a real zapper that has a bigger UV light source (often a small fluorescent bulb) and a more powerful HV source. That said, if you see one of these drifting around the clearance rack for a buck or two, it’s probably worth salvaging its internal components to power your high voltage adventures.