While the PlayStation 3 and Gamecube come from opposing sides of the aisle, and in fact aren’t even from the same generation of hardware, this DIY adapter built by [Jeannot] allows Nintendo’s console to use Sony’s Bluetooth controllers with surprisingly little fuss. This might seem unnecessary given the fact that Nintendo put out an official wireless controller for the system, but given how expensive they are on the second-hand market, you’d need to have pretty deep pockets for an untethered four-player session. Plus, there’s plenty of people who simply prefer the more traditional control layout offered by Sony’s pad. 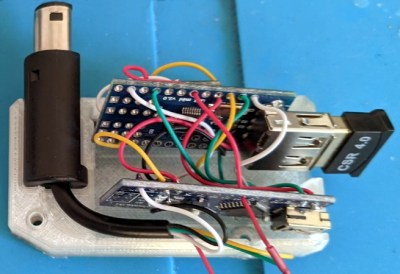 The internals of the 3D printed adapter are actually quite straightforward, consisting of nothing more than an Arduino Nano wired to a MAX3421E USB host shield. A common USB Bluetooth adapter is plugged into the shield, and the enclosure has an opening so it can be swapped out easily; which is important since that’s what the PS3 controller is actually paired to.

A Gamecube controller extension cable must be sacrificed to source the male connector, though if you wanted to fully commit to using Bluetooth controllers, it seems like you could turn this into an internal modification fairly easily. That would let you solder right to the controller port’s pads on the PCB, cutting the bill of materials down ever further.

[Jeannot] says the firmware is the product of combining a few existing libraries with a fair amount of experimentation, but as demonstrated in the video below, it works well enough to navigate the console’s built-in menu system. Future enhancements include getting the stick sensitivity closer to the values for the Gamecube’s standard controller, and adapting the code to work with newer PS4 controllers.

We’ve seen a fair amount of projects dedicated to the Gamecube’s official wireless controller, the Wavebird. From reverse engineering its RF communications protocol to adapting it for use with Nintendo’s latest console. There’s little debate that the Wavebird is a fine piece of engineering, but with how cheap and plentiful PlayStation controllers are, they tend to be the one hackers reach for when they want a dual-stick interface for their latest creation.