I’m always amazed that technology can totally wipe out industries. Sure, some people make a living making horseshoes, for example, but the demand for them is way down compared to what it would have been when horses were the normal mode of transportation. But even so, people still make horseshoes. But think about the ice harvesting business. Never heard of it? Turns out, before refrigeration, there was a huge business of moving ice from where it naturally occurred to other places and storing it, usually underground with a lot of insulation. As far as I know, that business — including the neighborhood ice man — is totally gone now except for some historical exhibitions. We take refrigeration and air conditioning for granted, but it hasn’t been that long ago that ice was a luxury and your own reprieve from the heat was a fan.

The story starts a little earlier than you might expect. In the 1840s, physician John Gorrie was concerned about “the evils of high temperature.” His hospital in Florida imported ice using the aforementioned ice trade and it wasn’t cheap nor was it very effective.

Undeterred, he developed a machine that used a horse, a waterwheel, steam, or wind power to drive a compressor to create ice. He got a patent in 1851 but it failed to catch on before his financial backer died. In fact, Oliver Evans had the idea in 1805 but never built a working machine. Jacob Perkins patented the first compression cooler in 1834, again with little practical use.

When U.S. President Garfield was shot, Navy engineers built a cooling box using cloths soaked in ice water to cool the president’s hospital room by 20 degrees. Since the mortally wounded president survived 80 days after the shooting, we presume he appreciated the comfort.

Carrier and The Hollywood Connection

We owe modern air conditioning to the magazine printing business. A magazine publisher in Brooklyn had such humidity that their pages were wrinkling. It was not only unsightly but created problems with the printing process. An engineer named Willis Carrier — still a name in the air conditioning business — worked for the Buffalo Forge Company and was asked to solve the problem in 1902.

His invention removed humidity from the air but, as a result, it also cooled down the air. Patents ensued and the apparatus also found use in the textile industry. Eventually, Carrier and six other engineers would leave Buffalo and form a company called Carrier.

It would be the 1920s, though, before the general public started to learn about air conditioning, thanks to the most unlikely venue: movie theaters.

Movie theaters modified their heating systems to blow cold air, which led to patrons on the floor having cold feet and those in the balcony were overly warm. In 1922, Carrier installed a well-designed system at the Metropolitan in Los Angeles. These early systems were prone to failure, however, so later that year Carrier introduced a centrifugal system first used in the Rivoli in New York.

Air conditioning in theaters increased business since people in the heat would gladly spend some money to sit in a cool theater for a few hours no matter what movie might be playing. They might even buy a drink or some popcorn.

These early air conditioners were big and expensive. They also used flammable refrigerants. Regardless, Frigidaire introduced a two-piece unit aimed at home use in 1929. By 1930, General Electric had an all-in-one design.

This was about the time that General Motors developed chlorofluorocarbons, a nonflammable coolant that would unfortunately later be found to harm the Earth’s ozone layer.

Expensive window units appeared in 1932 but did not become popular. An affordable window unit wouldn’t appear until 1947. Today, in the United States, 85% of homes have air conditioning of some sort. Heating and cooling account for about 48% of U.S. energy consumption.

So how does it work? When a liquid turns into a gas, it absorbs heat. The trick, then, is to compress a gas into a liquid and then let it turn back into a gas. The compression generates heat, of course, and that is exchanged using fans blowing over the condenser coils.

Ideally, that heat is put out of the area to cool. For a window unit, it goes out the back, for example. This is also one reason why portable units have a hose that you have to hang out of a door or window. 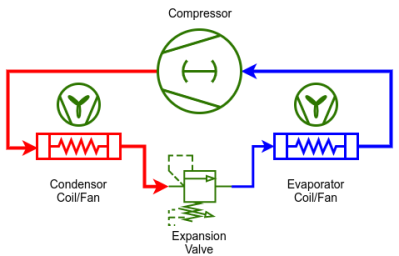 The gas flows through the system to the evaporator coils where it absorbs heat from the surrounding air. Cooling the air also causes condensation and every air conditioner has to dispose of the water somehow. Keep in mind, Carrier’s original device was meant to dehumidify.

An expansion valve separates the high pressure (liquid) side from the low pressure (gas) side. The valve only allows a tiny bit of refrigerant through at one time which prevents the pressure from equalizing on both sides of the valve. The liquid refrigerant suddenly in a lower pressure environment, expands into a gas and that’s what causes cooling.

Of course, there are variations. Fans might be blowers. Some large units cool water which is sent elsewhere, but the principles are the same. Refrigerators are, unsurprisingly, very similar although some of them use a different method to expand the gas and, of course, only cool an enclosed space with little or no outside airflow.

With air conditioning using so much power, it isn’t hard to imagine that people keep trying to come up with more efficient ways to cool off. Geothermal cooling relies on the fact that underground is relatively cool so you can exchange heat with the Earth making it cooler when your house is warm and warmer when your house is cool. This is a type of heat pump, and some heat pumps are little more than air conditioners that can switch their cold side and hot side via a reversing valve. These heat pumps draw heat from the air, which means when it is very cold outside they don’t work as well as a traditional heater.

Remember President Garfield’s air conditioner? Modern times have made that idea somewhat feasible again. Because of demand, it is often possible to purchase electricity for less cost at low demand times. To take advantage of the lower cost, office buildings can freeze water at night when they are closed and then use that ice to cool the building during the day. This requires a lot of water, of course and is sometimes augmented with traditional air conditioning. When electricity prices rise, maybe ice harvesting like in the video below will make a comeback. Probably not.

Of course, you can always DIY. We’ve seen a guy who builds air conditioners out of whatever he happens to find, or you could build your own small-scale ice cooler.

Banner image “Air Conditioners – Abstract” by zeevveez is licensed with CC BY 2.0.

Thumbnail image “Air Conditioner” by jthetzel is licensed with CC BY 2.0.