For a few years now it’s been an open secret that Prusa Research was working on a larger printer named, imaginatively enough, the Prusa XL. Positioned at the opposite end of their product spectrum from the wildly popular Prusa Mini, this upper-tier machine would be for serious hobbyists or small companies that need to print single-part objects that were too large for their flagship i3 MK3S+ printer. Unfortunately, the global COVID-19 pandemic made it difficult for the Czech company to focus on bringing a new product to market, to the point that some had begun to wonder if we’d ever see this mythical machine.

But now, finally, the wait is over. Or perhaps, it’s just beginning. That’s because while Prusa Research has officially announced their new XL model and opened preorders for the $1,999+ USD printer, it’s not expected to ship until at least the second quarter of 2022. That’s already a pretty substantial lead time, but given Prusa’s track record when it comes to product launches, we wouldn’t be surprised if early adopters don’t start seeing their machines until this time next year. 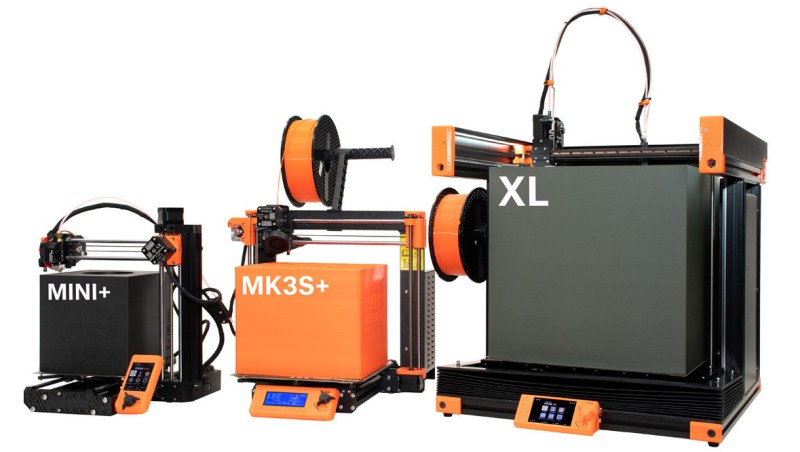 So what do you get for your money? Well, not an over-sized Prusa i3, that’s for sure. While many had speculated the XL would simply be a larger version of the company’s popular open source printer with a few modern niceties like a 32-bit control board sprinkled in, the reality is something else entirely. While the high purchase price and ponderous dimensions of the new machine might make it a tough sell for many in the hacker and maker communities, there’s little question that the technical improvements and innovations built into the Prusa XL provide a glimpse of the future for the desktop 3D printer market as a whole.

Going Back to the Future

The Prusa i3 MK3S+ is the latest and most evolved version of a design that can be traced back to the RepRap Mendel developed in 2009. There have been many clones and variations of this open source printer, but fundamentally they can be described as using a Cartesian movement system wherein an overhead extruder moves along the X and Z axes, while the print surface moves forward and backwards on the Y axis. The vast majority of modern desktop 3D printers today use some variation of this design, often integrating the improvements made by Prusa Research over the years.

So to the casual observer, surely the biggest change to the Prusa XL is that the machine is based on a completely different movement system that looks nothing like anything the company has produced to this point. With this style of movement, the extruder moves in the X and Y dimensions and the bed travels vertically to make up the Z axis. One of the major advantages of this layout is that far less stress is put on the printed part, especially when the machine is moving at high speed.

Rather than shaking the bed back and forth rapidly, which can introduce visual print artifacts, it’s slowly and smoothly lowered down as the printer proceeds to the next layer. This, combined with the inherent rigidity of the more cubic frame, allows for faster print speeds than are traditionally obtainable on Mendel/i3 machines. In the case of the Prusa XL this is particularly important, as the machine will need all the speed it can get to work through prints that take up any significant portion of its cavernous 36×36×36 cm (14.17×14.17×14.17 inch) build volume.

The specific arrangement of belts and stepper motors being used by the Prusa XL is officially known as CoreXY, a relatively modern implementation focused on speed and simplicity. But many of the design elements, such as constraining the overhead extruder to two-dimensional movement, and lowering the bed as the print progresses, are reminiscent of Darwin, the very first RepRap machine. While there are commercial 3D printers that adapted the Darwin approach, most notably those from Makerbot and Ultimaker, they’ve made little inroads with the hobbyist crowd.

Prusa coming full circle and abandoning the design that they helped popularize would be a quite shock, but thankfully, that’s not what’s happening here. The i3 design just doesn’t scale up well, and given the dimensions of the XL, presumably wasn’t able to hit the company’s performance goals. So for this particular product, they decided to go back to the drawing board.

At the same time, the cost and size of the XL is clearly aimed at a higher market than Prusa’s traditionally gone after. So while this larger printer might have embraced a new design, the i3 that hackers and makers love isn’t going anywhere. But that certainly doesn’t mean other features of the XL won’t be making their way to the rest of the Prusa family.

The size of the Prusa XL is obviously what makes the machine stand out, but upon closer inspection, there are a number of very interesting improvements that aren’t specifically related to the scale of the machine. In other words, these are the features that Prusa (and their competitors) will likely be mulling over for inclusion in other products once the kinks have been worked out and the designs have been cost-optimized a bit. 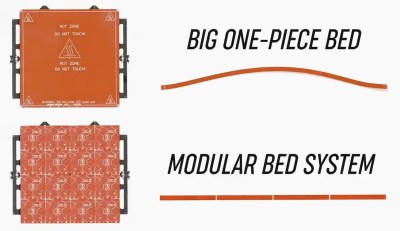 One of those is the new segmented bed heater. Traditionally, 3D printers have used one large heating pad to bring the whole bed up to temperature; a simple, but inefficient approach. With its unusually large bed, this inefficiency was simply too great to ignore, so Prusa has instead used an array of smaller heaters. The most obvious advantage of this approach is that it will allow for more localized, targeted heating. Why waste the energy and time required to heat the entire bed before each print when you don’t need to? But even on smaller beds, an array of heaters would have its advantages. Compared to one large heater, operating them in an alternating pattern would put less strain on the PSU, and they would have less tendency to induce a warp on the print surface.

Prusa has also completely redesigned the extruder assembly for the XL, and has done away with the inductive sensor used for bed leveling. In this new “Nextruder”, a custom built load cell integrated into the hotend’s heatsink allows using the printer’s nozzle as a physical probe to detect the bed position. This approach promises to be more accurate than the previous non-contact sensor, and isn’t dependent on the conductivity or magnetic properties of the bed material. We’ve seen this done in the DIY space before, and credit where it’s due, both Creality and Anycubic have implemented a similar feature on their newer printers. Prusa seems to have taken the capability a step farther though, as their press release claims the load sensor in the hotend is also able to detect when the printer has jammed; a capability that was quietly deleted from the i3 MK3S when it was determined the optical sensor used to detect filament movement was too temperamental.

Finally, the Prusa XL fully embraces the 32-bit control electronics that they first experimented with on the Mini in 2019. This is hardly a surprise, as eventually, even the cheapest of desktop 3D printers will ditch their 8-bit microcontrollers. But Prusa is in a particularly good place here as they’ve had a few years to refine their 32-bit firmware, and it looks like the XL will get enhanced versions of features which they’ve been testing on their entry-level printer, such as network control and 3D print previews.

There was a lot of excitement about Prusa’s Multi-Material Upgrade (MMU), and as they moved from the initial version that required a stepper motor for each material to the far more refined approach that could cut the filament and load it into the extruder on-demand, it was clear the company was giving the concept a lot of thought. But as many MMU owners would attest, the reality of using the device has always left something to be desired. There’s simply too many moving pieces involved, literally and figuratively, to make the system reliable with a single extruder.

Which is why on the Prusa XL, they aren’t even trying. Rather than feeding different filaments into one extruder to achieve multi-color or multi-material printing, the XL simply switches between up to five extruders that have already been loaded with the appropriate filaments.

Naturally this involves a lot of extra engineering and hardware, as the printer needs to be able to rapidly and accurately swap between the extruders hundreds if not thousands of times during the course of a long print. But if done properly, it’s certainly the more reliable approach. It also offers some tantalizing possibilities, as the technique doesn’t have to be limited to extruders. Whether it happens through an official upgrade or DIY means, it seems inevitable we’ll see a Prusa XL wielding a laser before too long.

The Prusa XL implementing full tool-changing capabilities would seem to bode ill for the MMU. Even after years of refinement, the company wasn’t confident enough in the technology to even offer it as an option on their new high-end machine. The chance that we’ll see further development on the MMU seems slim at this point, but there could be a silver lining: it may be that Prusa is planning to implement similar, if somewhat more constrained, tool-changing capabilities as an option on the next generation of their i3 printer.

The Shape of Things to Come

The Prusa XL has a lot of fascinating technology onboard, of which we’ve just covered the highlights here. While some of it is undoubtedly better suited to large-format machines, it stands to reason that at least a few of these features will filter down to the i3 and Mini models as those machines hit their next evolutionary releases. Looking a bit farther out, it’s also a near certainty that other manufacturers will attempt to implement their own versions of these features. So whether or not you’re getting it from Prusa, it seems a safe bet you’ll be benefiting from at least some of these advancements if you plan on purchasing a new 3D printer in the next couple of years.

43 thoughts on “Prusa XL Goes Big, But That’s Only Half The Story”