Make enough attempts to cut foam using whatever you’ve got — utility knife, hacksaw, serrated plastic knife — and you’ll wish hard for something that cuts cleaner, faster, and better. While there are all sorts of ways to build a hot wire foam cutter, this design from [jasonwinfieldnz] is both interesting and imitable. 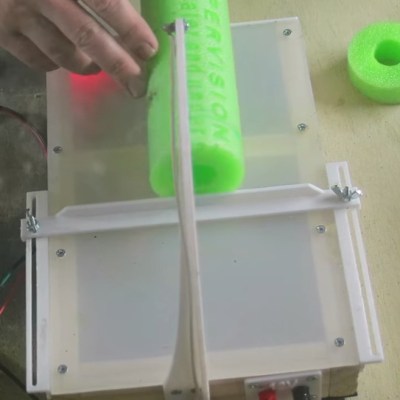 If you don’t already know it, nichrome wire is nifty stuff that’s readily available in thrift store hair dryers and toasters. It stretches as it heats up, and shrinks as it cools back down.

The interesting part of this build is that instead of using a spring to keep tension on the nichrome wire, [jasonwinfieldnz] designed and 3D-printed a bow out of PLA that does the job elegantly. While [jason] was initially concerned that the bow might possibly melt, he found in practice that although the bow does get warm to the touch, it’s nowhere near hot enough to even warp.

One nice touch is the simple fence that rides along two slots and secures with wingnuts. We also like that [jason] made this foam cutter largely from scrap material, and rather than buy a spool of nichrome, he opted for a skinny heating element and pillaging the wire.

If you’re a nichrome noob, know that it doesn’t take much juice to do the job. Even though a computer power supply is what [jason] had lying around, it’s complete overkill, so you would definitely want to limit the current. Check out the build video after the break.

Still not portable enough for you? All you really need is a 18650, some nichrome, and a few bits and bobs to hold it all together.