“Just add solar panels to the wings” is a popular suggestion for improving the flight times of fixed-wing drones. However, the reality is not so simple, and it’s easy to hurt rather than help flight times with the added weight and complexity. The team at [Bearospace Industries] has been working on the challenge for the while, and their Solar Dragon aircraft recently had a very successful test flight, producing about 50% more power than it was consuming.

Instead of just trying to slap solar panels to an existing plane, an airframe should ideally be designed from the ground up as a balancing act between a range of factors. These include weight, efficiency, flight envelope, structural integrity, and maximum surface area for solar panels. All the considerations are discussed by [Bearospace] in an excellent in-depth video, which is an indispensable resource for anyone planning to build a solar plane. 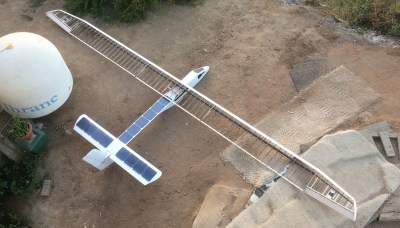 [Bearospace] put all the theory into practice on Solar Dragon, which incorporates over 250 W of high-efficiency Maxeon C60 solar cells on the wing, tail, and triangular fuselage. The cells were wired to match their maximum power point voltage as closely as possible to the plane’s 3S lithium-ion battery pack, enabling the solar cells to charge the battery directly. To prevent overcharging, a solid state relay was used to disconnect the solar cells from the battery as required.

The batteries maintained the same average state of charge during the entire one-hour late morning flight, even though the panels were only connected 65% of the time. The team expects they might be able to get even better performance from the cells with a good MPPT charger, which will be required for less than ideal solar conditions.

Solar Dragon has a much larger payload capacity than was used during the test flight, more than enough for an MPPT charger and a significantly larger battery. With this and a long list of other planned improvements, it might be possible for the Solar Dragon to charge up during the day and fly throughout the night on battery power alone. One interesting potential approach mentioned is to also store energy in the form of altitude during the day, and use the aircraft’s slow sink rate to minimize battery usage at night.

Solar planes come up every few months on Hackaday, with [rctestflight] being one of the usual suspects. You also don’t need solar panels for long flight times, as [Matthew Heiskell] proved with a 10-hour 45 minute flight on battery power alone.