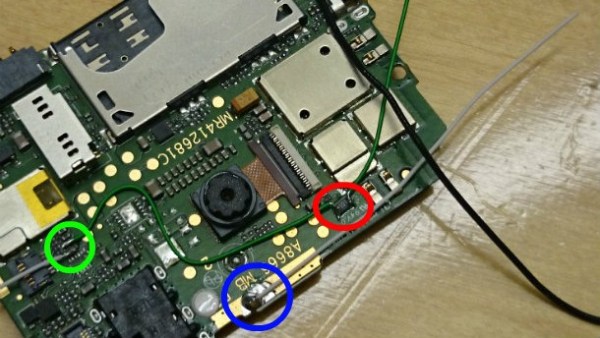 Internet connected cameras are mighty useful, specially in situations requiring some form of remote monitoring. An always-on camera that is available over an internet connection, is cheap, and uses re-purposed  hardware – that’s what the Gonzo project hopes to achieve. To accommodate these requirements, the Exploratory Engineering program team in Telenor Digital are using off-the-shelf phone hardware running on top of a fork of Firefox OS. You hang the Gonzo where you want to monitor a situation, after which it will function for up to one month before needing a recharge, sending data to a designated public URL over the 2G network.

A big downside with using such hardware is that it is not designed for the task at hand, and offers no expansion ports that may be needed for certain functions. In this particular case, the designers needed a couple of output ports to drive some LED’s. The hardware guys got a bit creative,  and re-mapped the volume buttons of the phone into generic GPIO ports. On the software side, they looked at where the button GPIO’s were referenced, and located how they are mapped to a keymap. They then added a device driver that maps the GPIO ports to be generic ports instead. Modding the hardware needed a little bit more hard work, figuring out which traces connected to the two volume buttons, adding series resistors, and then wiring the LED’s in place. The project itself is still a work in progress, and you can read more about it at the Gonzo website.

If you’re like one of us and have a box full of old phones lying around, take a look at some creative suggestions here for some Arduino controlled robots.

Ever since Hack a Day first emerged on the scene in 2004, the site’s design has been pretty consistent. The black background with its green and white text, while a bit dubious looking at work, is fine by me. For others however, the site’s design is a constant eyesore both figuratively and literally. [James Litton] is one of those readers, and he wrote in to share a tip that helps him read up on the latest hacks without killing his eyes.

[James] uses Firefox to browse the web, so he whipped up a small Greasemonkey script that tweaks Hack a Day’s style sheet once it reaches his browser. His script inverts the background while changing a few other items, making for a much more comfortable read. Overall we found the change to be pretty reasonable, but go ahead and judge for yourself – you can see the before and after screen shots in greater detail on his site.

[James] also points out that the script should work just fine in Chrome, for those of you who prefer that browser instead.

So if your eyes are a bit on the sensitive side, feel free to grab his script and customize away – I don’t think we’ll be changing the theme any time soon.

We picked up a great Firefox bookmark tip from [Colin]. He wanted an easier way to look up bug numbers on the launchpad bug tracker. Because the url is always the same with the bug number at the end of the address, he replaced the final portion of the url with %s. Now, when he types the keyword followed by the bug number in the address bar the bug page loads right up.

We don’t do all that many bug searches but it’s immediately obvious that this can be useful in a lot of ways. In the photo above you can see we’ve set up a shortcut to the tag pages for hackaday.com. Now we just type “hack” with the tag we want after it. Add this to your bookmarks and try typing “hack firefox” into the address bar.

Why settle for the standard home icon on your browser? If your home button brings you to hackaday.com, why not make the icon reflect that destination? This hack is quick and simple. We’ll take you through it using Firefox 3 and the default theme with standard sized icons. END_OF_DOCUMENT_TOKEN_TO_BE_REPLACED

With netbooks being slim and mostly utilitarian, it seems a bit contradictory to use a standard and somewhat bulky web browser with them. After all, we’re trimming down the operating system to perform faster on these little devices, so why not thin out the focal point of the netbook: the browser. Firefox, Chrome, or Safari may be well and great for a full powered desktop or laptop, so how about something a bit more trimmed? Enter the lightweight Webkit based browsers: Arora and Midori.

END_OF_DOCUMENT_TOKEN_TO_BE_REPLACED

Lifehacker has published an overview of some of the many ways you can secure your data. The post was prompted by recently released browser vulnerabilities: first IE, then Firefox. They cover techniques far beyond just browser security, like how to properly wipe your iPhone. They mention disk encryption go-to TrueCrypt along with password management tools like KeePass. They also suggest using temporary credit cards to mitigate the impact of fraud.