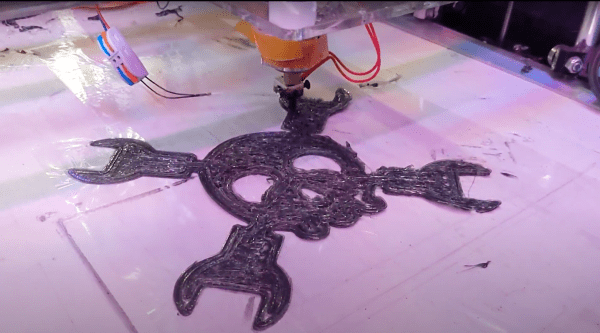 Do you remember [Sam Smith]’s Metabolizer from a few years back? In case you’ve forgotten, this baby takes trash and turns it into printed plastic objects, and it’s solar-powered to boot. Although the Metabolizer didn’t win the 2018 Hackaday Prize, [Sam] and his machine won many achievements that year, including the Open Hardware Challenge. It’s fantastic to see the project still improving. 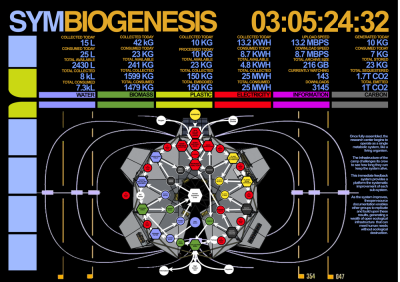 To recap, the sun hits the solar panels and charge up the battery bank. Once there’s enough power to start the reaction, it gets dumped into a heating element that turns biomass into biochar. This smoke is cooled, collected, refined, and fed into a small gas generator, which produces DC power to run a 3/4-horsepower shredder and the trash printer.

[Sam] likens this beast to a Rube Goldberg machine in that it performs an overly-complicated chain reaction to do a simple task. We certainly see his point, but we think that this machine is worth so much more than those classic machines, which tend to do nothing useful at all and tend to consume many resources in the process.  On the contrary, the Metabolizer’s chain reaction starts with sunshine and ends with useful objects that keep plastic out of landfills. Honestly, it’s more akin to a compost heap with a PhD in Biology and a handful of steroids and a 3D printer attached.

Unfortunately, [Sam] couldn’t get a prototype working in time for the Prize, and he turned to Patreon to gain support after the $1,000 ran out. Three years and a ton of improvements later, [Sam] has a working prototype that’s cheaper, more efficient, and easier to build. But can it be built relatively easily by someone other than [Sam]? Consider the gauntlet thrown down.

Not happy with your standard-style compost pile? You need a DIY trommel to sift out the bad stuff. 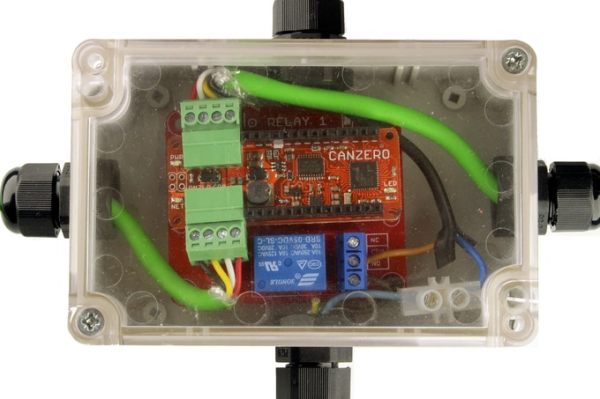 For home use IoT systems, getting sensor data from tons of physical locations centralized to a single Raspberry Pi can be a difficult job, especially when considering the power consumption that’s necessary for doing it all over WiFi. When you’re using an ESP8266, for instance, swapping out batteries and accounting for connectivity issues can be a major hassle for a long-term solution. The NoCAN platform, created by [Alain Pannetrat], solves this problem using a wired approach that improves the use of the CAN bus.

Since SPI and I2C only work for short distances, approaches like RS-485 and CAN bus are a better bet for this type of setup. For systems with one centralized point, RS-485 works best – thus, the CAN bus is the better approach when you’re considering using multiple masters in a single environment.

CAN devices typically need a static address, so messaging involves sending data to the known address of the destination device. With NoCAN, a dynamic address assignment scheme allows nodes to request an address from a node manager on boot-up (similar to DHCP). A command line application also allows users to send and receive message from nodes using a pub/sub implementation – a device sends messages to a channel, and every device subscribed to the channel receives the message.

The hardware for the NoCAN platform consists of a Raspberry Pi with a “PiMaster” HAT and an Arduino-compatible CANZERO board. The PiMaster HAT uses an STM32F042 ARM Cortex M0 MCU, acting as an interface between the Pi and the CAN bus as well as preventing over-current events with a software-controlled smart switch. The CANZERO is based on the the SAMD21G18 ARM Cortex M0+ running at 48MHz, similar to the Arduino MKR Zero, with CAN bus networking using the STM32F042 ARM Cortex M0. The double MCU design allows the secondary MCU to reset the primary if it gets stuck due to a programming error, with the messages sent over the CAN bus.

To join the network together, a four-wire cable daisy-chains the nodes in the bus network, providing connectivity for up to 1000 feet. Either 12V or 24V DC power runs through the network, stepping down to 5V or 3.3V at each node. The approach is similar to PoE (power over Ethernet), although it is slower and lower in cost. Overall, it seems like a good solution for environments where wireless connectivity simply doesn’t cut it. 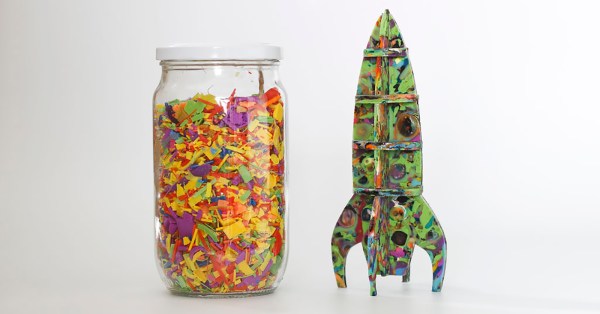 If you have a 3D printer, you’re surrounded by plastic trash. I’m speaking, of course, of failed prints, brims, and support material that builds up in the trash can near your printer. Although machines that turn that trash into filament exist, they’re not exactly common. But there’s another way to turn that waste into new building materials. [flowalistic], 3D designer extraordinaire, is using that trash to create panels of plastic and throwing that into a laser cutter. It’s a plastic smoothie, and if you can sort your scrap by color, the results look fantastic.

The first step in turning garbage plastic into a plastic sheet is throwing everything into a blender. Only PLA was used for this experiment because using ABS will release chlorine gas. These plastic fragments were placed in the oven, on a cookie sheet with a sheet of parchment paper. After about a half an hour of baking at 200 °C, the sheet was pressed between sheets of wood and left to cool. From there, the PLA sheet was sent to the laser cutter where it can be fabricated into rings, models, coasters, spirographs, and toys.

While this is an interesting application of trash using parts and equipment [flowalistic] had sitting around — therefore, a hack — it must be noted this should never be replicated by anyone. That big bag of scrap plastic could contain ABS, and you should never put ABS in a laser cutter unless you want your workspace to smell awful. And/or be sure to crack a window.