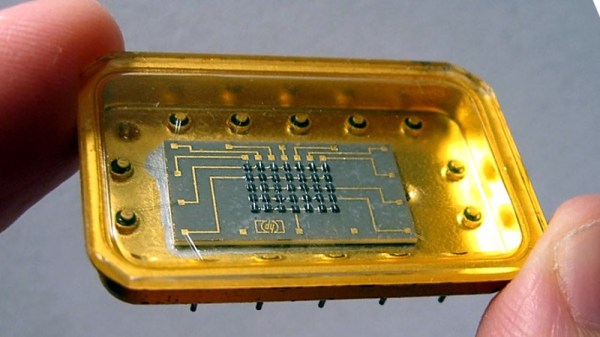 Early LED displays came in all sorts of configurations. Because the LED was fairly new technology, all kinds of ideas were getting tried, and with all that work there was plenty of opportunity for hardware that didn’t make the cut to fall into obscurity. That’s exactly what happened to the Hewlett-Packard 5082-7002, a 5×7 LED matrix display with something many of its brethren didn’t: an oversized gold tub to sit in. 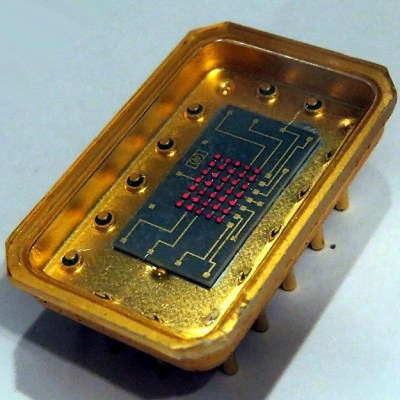 It doesn’t seem that these displays were ever used in any actual products, and its origins are a mystery, but the device itself was nevertheless assigned an HP part number. Beyond that, not much is known about them, but [Industrial Alchemy] reminds us that many early LED devices were poorly documented and never produced in any real quantities. They became forgotten hardware, waiting to be rediscovered.

The 5082-7002 has a oversized gold tub that makes the 5×7 LED matrix mounted inside look puny by comparison, and reading any display made from these units would be difficult because the large size of the device would mean a lot of empty space between each character or digit. But it’s definitely got a striking look to it, no doubt about that. END_OF_DOCUMENT_TOKEN_TO_BE_REPLACED

If you want to mess around with some microcontrollers but don’t really have a purpose in mind this project is perfect for you. It’s cheap, easy to assemble, and there’s blinking LEDs! [TigerUp] shows us how he  put together some LED matrix pendants using just five components.

He calls the project Tiny Matrix, which is fitting as the pendant outline is barely 0.5″ by 0.7″. On the back an ATtiny2313 chip has been soldered directly to the legs of the LED display. They just happen to line up with I/O pins on the chip which makes for super simple soldering. Power comes from a coin-cell which is connected to the pendant by a red and black wire which make up the necklace for the device. The last two components not yet mentioned are a momentary push switch for changing modes, and a pull-up resistor on the reset pin. The bill of materials rings in at $4 and his firmware offers up nine different modes as you can see in the clip after the break.

[TigerUp] was inspired by this 8×8 matrix project.